Chechen warlord Shamil Basayev is no stranger to violence. In the turbulent world of the northern Caucasus, Basayev has fought in the Abkhaz rebellion of 1992-93, and played a central role in the first Chechen war of 1994-96, the invasion of Dagestan in 1999, and the current conflict in Chechnya. In addition, he received training in guerrilla warfare and covert operations from both Russia and Afghanistan. There is no question that Basayev is one of the most experienced and dangerous practitioners of “asymmetrical warfare” in the world today. It is often said that the suicide truck-bombers of Iraq have adopted Palestinian or al Qaeda tactics, but it was Basayev who perfected the procedure in a series of attacks on Russian targets that began in 2000. Today Basayev declares himself at war with Russian “state terrorism,” alleging genocidal intentions on the part of Moscow.

Once an exponent of purely military tactics against the Russians, Basayev has openly embraced the tactics of terrorism in the last year, seeking to provoke a catalytic event that would free Chechnya from Russian rule. The shift comes from the recognition that the Chechen resistance can no longer mount mass assaults like the one on Grozny that ended the first conflict in 1996. “Our mission today is to give the invaders a good kick to push them to withdraw, and, God willing, we will do that!” His dismissal from the Chechen command structure after admitting his complicity in organizing the infamous hostage taking at a Moscow theater in October 2002 appears to have liberated Basayev from the necessity of harmonizing his words and actions with those of the beleaguered Chechen president, Aslan Maskhadov.

In his defense of terrorism Basayev uses a mix of reasoning, Chechen proverbs and bitter humor to pose difficult questions to the West regarding appropriate responses to “state terrorism.” While the concept of “state terrorism” is rarely part of the security discourse in the West, it has a prominent place in the Islamic world, as seen in the provocative comments of Malaysia’s President Mahathir Mohamad at the October 2003 APEC conference:

“Terror attacks are not just by irregulars… Indeed, we see states launching massive retaliation, not just to curb suspected terrorists, but his family, his village and his town. It would be ridiculous to think that such attacks do not terrorize the innocent. In fact, the terrorism is even greater, for it is systematic and executed with heavy weapons in the hands of trained soldiers.” [1]

In response to the atrocities carried out by Russian security forces in Chechnya, Basayev remarks: “Today we can see on TV how rapid-reaction units and special-purpose police units are getting dispatched (to Chechnya), and how their wives, their sisters and their mothers are wishing them a good trip. We will be conducting operations right in those cities and villages where they came from.” This declaration follows a decision taken by Basayev’s Riyadus Salikhin Brigade of Martyrs to undertake “Operation Boomerang,” applying the principle of collective responsibility to the Russians, just as the Russians apply it in Chechnya by carrying out retaliation attacks on the families of Chechen resistance fighters. “Collective responsibility” has long been an established policy in Israel’s war on terrorist formations, and the United States has recently been accused of applying the policy in Iraq (in violation of the Geneva Conventions) through arrests of family members of suspected resistance members and the destruction of their homes.

On August 4, 2003, U.S. Secretary of State Colin Powell designated Basayev a threat to U.S. security, adding that Basayev “has committed, or poses the risk of committing, acts of terrorism” against America. [2] Before the American intervention in Afghanistan, Basayev rarely commented on the United States, other than to criticize its lack of support for the Chechen struggle. Since then, however, Basayev now refers to “Adolf Bush,” and describes America as a mirror image of the Roman Empire, thrashing out against “the barbarians” as it collapses from internal corruption and moral decay.

Unlike many Islamists, however, Basayev denies that the United States is engaged in an anti-Islamic “crusade.” “There is nothing crusading in America’s actions. This is a satanic campaign against the entire world, against anything sacred in this world, against Islam, against Christianity, against Judaism–it is… the attack of godlessness and Satanism against the Faith on all fronts and all levels under the guise of all sorts of slogans.” [3] Basayev also adds that the removal of dictators like Saddam Hussein will benefit Muslims, giving them the chance to rise together in unity. Saddam, a vocal supporter of the Russian campaign in Chechnya, is little missed in rebel circles. 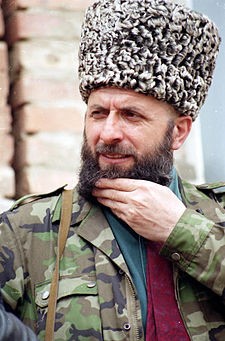 Basayev calls the bombings of Russian security installations “anti-terror” operations. The use of suicide bombers in attacks has been defended by a former president of Chechnya, Zelimkhan Yandarbiyev: “Acts of self-sacrifice have been happening in all times during all wars that had a sacred nature, like the national liberation Jihad of the Chechen people. Chechens, Palestinians and other people are all using them… The main thing is that they were aimed at achieving godly goals of the fight and inflicting maximum damage on the enemy.” Current President Aslan Maskhadov takes another view: “Shamil thinks, I’m sure, he’s absolutely sincere, that in the conflict with Russia, all methods are permitted for the Chechens. In the view of the specific circumstances, I can’t agree with this. Today Shamil Basayev isn’t part of the armed forces of the Chechen Republic.” [4]

The tactics of terror are, of course, nothing new to Basayev, who first came to attention as an airplane hijacker in 1991. Since then he has planted radioactive material in Moscow (as a warning), seized a hospital with 200 hostages in Budennovsk, and executed Russian prisoners after the Russian army failed to exchange alleged war criminal Colonel Yury Budanov for the men (a decision Basayev and Saudi warlord al-Khattab claimed was fully justified by Islamic law).

“They are trying to accuse us of killing innocent people… They cannot be “totally innocent,” for the simple fact that they are approving of this slaughter, financing it, electing the rulers that are publicly promising to deal with the Chechens, and conducting genocide on the Chechen land.” [5]

Amir Abu al-Walid, leader of the Arab contingent in Chechnya, has similarly declared that the Russian people bore responsibility for electing the Putin government, and must now pay “with their blood and their sons.” [6] Basayev is not the first radical to come to a conclusion of “collective responsibility” on the part of his opponents. His defense of terrorist methods recalls the statement made by anarchist bomber Emile Henry at his Paris trial in 1894:

“Those good bourgeois who hold no office but who reap their dividends and live idly on the profits of the workers’ toil, they also must take their share in the reprisals. And not only they, but all those who are satisfied with the existing order, who applaud the acts of government and so become its accomplices … We will not spare the women and children of the bourgeois, for the women and children of those we love have not been spared.” [7]

In November of 2002 Basayev warned the NATO nations of the havoc he intended to wreak in the Russian interior, outlining the cost to the Western world of a Russian collapse. Hampered in mobility by multiple wounds and the amputation of his foot, Basayev nevertheless remains capable of mounting deadly strikes at Russian targets. Despite being declared a threat to American interests, Basayev appears to be satisfied with verbal jabs at the West for now, choosing to remind the West of its complicity in the coming violence through its support of President Putin.

Basayev’s charges have been echoed within Russia by the co-leader of the Union of Right Forces (SPS), Irina Khakamada, who has appealed to Russian victims of “state terrorism,” and by independent presidential candidate Ivan Rybkin, who has described the activities of Putin and his circle as “state crimes.” Basayev now finds himself at odds with the foreign minister of Chechnya, Ilyas Akhmadov, who routinely condemns every action of the “Brigade of Martyrs.” Akhmadov himself refers to the “terrorist and bandit formations calling themselves the Russian Army,” and opposes efforts to categorize Maskhadov’s military command (which now excludes Basayev) as “terrorists.”

Ahmed Zakaev, Maskhadov’s personal representative in Europe, also condemns the “Brigade of Martyrs,” but adds: “Let me stress that Basayev’s suicide bombers are not religious fanatics but people gripped by feelings of vengeance for their tortured sons, murdered infants, and raped daughters.” [8] President Maskhadov, a resolute advocate of the application of international law in the conflict, nevertheless displays some understanding of Basayev’s rage against Russia:

“Basayev is a warrior. He is somebody who is exerting revenge. He employs the same methods as the enemy, who uses them against the Chechens, civilians. It is an eye for an eye… If it were possible to subordinate Basayev and to funnel all his energy against the enemy, employing acceptable methods, he would achieve much more.” [9]

Basayev, now the lethal wild card of the Chechen conflict, is defiant to the end. He has offered to end the activities of the “Riyadus Salakhin” if the Russians agree to conduct the Chechen/Russian conflict according to international law. Otherwise,

“If the Kafirs (infidels) want me to die so bad, I can make them an offer: let them give me some money, about 10-20 million (or) more, and I will give that money to Maskhadov to continue the Jihad, and I myself will buy me a good Kamaz truck and will drive right up to them!” [10]

This article first appeared in the February 26, 2004 issue of the Jamestown Foundation’s Terrorism Monitor.