A little known veteran jihadist, Abu Hafs al-Urdani, made a rather dramatic entrance onto the world stage on February 5, 2003, when U.S. Secretary of State Colin Powell displayed his photo in a speech before the U.N.Security Council. Abu Hafs was identified as part of fellow Jordanian Abu Musab al-Zarqawi’s “Iraq-linked terrorist network.” (Abu Hafs al-Urdani is not to be confused with al-Qaeda leaders Abu Hafs al-Masri, who is deceased, or Abu Hafs al-Mauritani. Al-Urdani also has no connection to the Abu Hafs al-Masri Brigade). 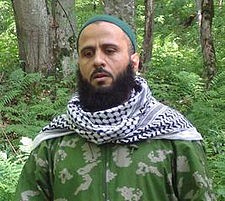 Almost immediately after Saudi Amir Abu al-Walid (‘Abd al-Aziz al-Ghamidi) was reported killed in Vedeno province in April 2004, al-Jazeera carried a statement from the Chechen Majlis al-Shura (Command Council) that Abu Hafs had succeeded al-Walid as commander of the foreign Mujahideen in Chechnya. As a Jordanian, Abu Hafs is the first non-Saudi to command the foreign fighters (though the FSB claims he holds Saudi citizenship). Abu Hafs, like every other Arab mujahideen leader, is claimed by Russian intelligence to be a close associate of Osama Bin Laden, but the Russians have offered no evidence to support this claim. In the wake of the Beslan massacre, Abu Hafs was identified as the financier of the terrorist operation, working from a camp in Chechnya’s Vedeno district. (Saudi Abu Omar al-Saif has also been accused by the FSB of being the Beslan paymaster.)

Abu Hafs was likely commander of the approximately 80 foreign fighters (mostly Arabs and Turks) who accompanied Chechen warlord Ruslan “Hamzat” Gelayev in his return to Russia in August 2002. In the last two years there has been a gradual change in the composition of the foreign mujahideen. Turks and diaspora “Chechen-Arabs” now appear to be at least as well represented in the small corps of foreign volunteers as the more ideologically driven Gulf State Arabs. (This was recently confirmed by Russian Defense Minister Sergei Ivanov. See: Alexei Berezin: “Most of Foreign Mercenaries killed in Chechnya are Turks,” RIA Novosti, January 3, 2005.) The topic of Turkish fighters in Chechnya was raised during President Vladimir Putin’s October 2004 state visit to Turkey. The promotion of a Jordanian to commander of the foreign mujahideen may reflect a shift in external financing from the hard-pressed Saudi charities to diaspora-based organizations. There are indications that external financing for the Chechen fighters is at a low ebb, though the problem has been eased by the seizure of Russian funds destined for the Chechen government and extortion of Chechen collaborators. (See Mark MacKinnon’s interview with Chechen warlord Shamil Basayev, Chechenpress, October 31, 2004.)

Much of the FSB’s information on Abu Haf’s career comes supposedly through the interrogation of one his fighters, Algerian Abu Muskhab (Rabat Kamal Burakhlya), who was arrested entering Azerbaijan for medical treatment on September 17, 2004. Russian intelligence claims Abu Muskhab was present at the Beslan school seizure in early September 2004 with two other Algerians, Osman Larussi and Yacine Benalia, both of whom were already reported killed in a Russian operation in Chechnya on March 8, 2004. According to anonymous FSB sources, Abu Hafs joined Amir al-Khattab and Abu al-Walid in the Tajikistan civil war of 1994-95 before becoming a military trainer in Khattab’s camp in Chechnya in 1995, where he married a Chechen woman.

In 1996, Abu Hafs relocated to Georgia “on Osama Bin Laden’s order” to take charge of al-Qaeda operations in the Pankisi Gorge. Abu Hafs is allegedly in charge of the distribution of all al-Qaeda funds sent to Chechnya. (Before his death last year, Russian intelligence usually attributed this role to al-Walid.) Abu Hafs is also described as having been in charge of weapons supplies to the fighters in the Pankisi Gorge. (This statement implies that arms were being shipped in to the fighters. Aside from the practical difficulties of such international shipments, it is known that Gelayev arranged the re-outfitting of his men from Georgian sources in exchange for joining the fighting in Abkhazia. Russian arms are also available from the cash-strapped Russian rump garrisons in Georgia). In the FSB’s account, Abu Hafs returned to Chechnya in 2002 at the request of Khattab’s successor, Abu al-Walid. After his return Abu Hafs took a second wife, the widow of Yemeni mujahideen leader Abu al-Ja’afar. Abu Hafs’ picture was recently published on the website of the “Chechen Informational Center,” posing in the firing position with a weapon in a white winter uniform and traditional Chechen lambskin hat.

During his stay in Georgia, Abu Hafs operated under the name “Amjet” (or Amzhet). There were numerous reports of Abu Hafs’ largesse, building both a mosque and hospital in the Pankisi Gorge. According to Georgian security, the hospital was military in nature and (even more questionably) entirely funded by al-Qaeda. However, there seems to be little value to a military hospital that would be inaccessible from Chechnya for over half the year (due to ice and snow in the mountain passes) and would require the continued cooperation of the Georgian government to operate.

On August 20, 2004, Abu Hafs issued a rare statement, addressed to the Conference of the Islamic Conference and the Arab League. The statement urged member states to avoid participation in the Chechen presidential elections, warning that their role as observers offered legitimacy to the actions of the Russian army, which included “the killing of unarmed innocent civilians among the sheikhs, the women and the children, the rape of the virgin Chechen women, the looting of the oil wealth of Chechnya, and the attempt to subjugate the Chechen nation and the obliteration of its Islamic identity” (Communiqué from Abu Hafs al-Urdani, Commander of the Foreign Mujahideen in Chechnya, August 29, 2004). Abu Hafs signed his statement as “Commander of the Eastern Front,” the same role that Abu Walid held in the Chechen command.

Abu Hafs followed this statement with another on September 19, 2004, in which he berates the failure of Arab leaders to support the Chechen struggle as “treason against Allah.” The mujahideen leader also declared “the commencement of attacks on Russian and American interests in Chechnya after having observed that the Russian and American sides continue to [attack] the honor and dignity of Islam and the Muslims in Chechnya, Palestine, Iraq, Indonesia, Afghanistan, and in other Muslim countries” (Communique from Abu Hafs al-Urdani, September 19, 2004). The statement is unusual in its targeting of the U.S., something typically avoided by Chechen militants. Even Basayev prefers to forgo threats to the U.S. in favor of warning the U.S. of the consequences of inaction as Russia descends into dictatorship.

In December 2004, the Russian army reported the presence of 200 Chechens and 30 Turkish-speaking fighters receiving training in the Pankisi Gorge. The camp is allegedly run by two members of Abu Hafs’ group, Abu Rabiya and Abu Atiya (also described in the Powell presentation). The latter was last heard from in September 2003, when he was arrested in Azerbaijan. Georgia has suggested these reports are a provocation designed to apply pressure in the ongoing dispute over the status of Abkhazia and South Ossetia.

Abu al-Walid began his career as the successor of Emir Khattab in a similarly muted fashion, though his public wariness did not prevent his death from a Russian shell. Like Abu al-Walid, Abu Hafs is now vilified by Russian intelligence as the main representative of al-Qaeda in the North Caucasus. FSB Director Nikolai Patrushev has identified the detention of Abu Hafs as a priority for all the secret services of Russia. On December 3, 2004, Russian Special Forces announced the killing of a Syrian citizen in Ingushetia known as “Marwan,” said to be a deputy to Abu Hafs. According to the FSB, Marwan was closely tied to several Turkish Islamist groups.

If Abu Hafs is to have a longer career than al-Khattab and Abu al-Walid as leader of the foreign mujahideen he will need to keep a low profile. Antagonizing the U.S. is unlikely to contribute to his safety, especially in view of the alleged American surveillance contributions to the demise of Chechen President Dzhokar Dudaev and warlord Ruslan Gelayev. Without a public presence, however, Abu Hafs will have difficulty in keeping the Chechen struggle in the field of vision of the international Islamist donor community.

This article first appeared in the North Caucasus Analysis 6(5), February 2 2005