One of the principal inspirations for the type of Islamist ideology pursued by Osama bin Laden and his Egyptian chief lieutenant, Dr. Ayman al-Zawahiri, is the work of Egyptian Islamist Sayyid Qutb (1906-66). Qutb was an important theorist in the Islamist movement and a leader of the Muslim Brotherhood (al-Ikhwan al-Muslimun). His opposition to the secular Arab nationalism of Nasser led to his execution in 1966; he was accused of plotting to overthrow the Egyptian government. Qutb’s elegant prose barely conceals the rage against injustice and immorality that drove him, but it was his militant interpretation of jihad (“striving in the cause of God”) that would later inspire Dr. Abdullah Azzam (1941-89), the late founder of the organization that would become al Qaeda. While studying at Cairo’s Al-Azhar University (Sunni Islam’s preeminent theological school), Azzam became close to Qutb’s family and legacy. Working in large part from Qutb’s ideas, Azzam transformed radical Islam from a group of disparate national movements into a potent international force during the Afghan-Soviet war. 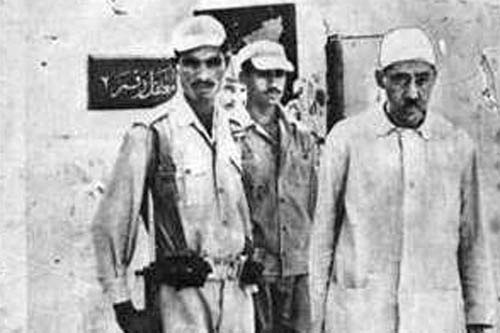 Shortly after Qutb’s death came a proliferation of radical Islamist groups in Egypt, inspired by the works of Qutb and Mawlana Abul A’la Maududi (1903-79), an Indian-born journalist who became a leading Islamist theorist in post-independence Pakistan. Qutb admired Maududi and was deeply influenced by Maududi’s conception of Islam as a revolutionary force. As Maududi expressed it in 1926, “Islam is a revolutionary ideology and program which seeks to alter the social order of the whole world and rebuild it in conformity with its tenets and ideals.” According to Qutb:

[Islam] is, in effect, a revolt against any human situation where sovereignty, or indeed Godhead, is given to human beings. A situation that gives ultimate authority to human beings actually elevates those humans to the status of deities, usurping God’s own authority. As a declaration of human liberation, Islam means returning God’s authority to Him, rejecting the usurpers who rule over human communities according to man-made laws… Nothing of this is achieved through verbal advocacy of Islam [alone].

Drawing on the example of controversial mediaeval scholar Ibn Taymiyyah (1263-1328), Qutb suggested that the existing Egyptian state could be overthrown as “un-Islamic,” a promoter of modern jahiliya (ignorance of the truths of religion). Qutb reinterpreted the concept of jahiliya, applying it to the expansionist non-Muslim world. This was a subtle reworking of the traditional Islamic division of the world into two spheres, Dar al-Islam (the abode of Islam), and Dar al-Harb (the abode of conflict, i.e., an imperfect, non-Islamic social order). While a Muslim might ignore conditions in the Dar al-Harb, it was his duty to combat the threat to Islam posed by the jahiliya. To Qutb, jahiliya meant the modern forces of “ignorance,” the secularism of both the western capitalists and the eastern communists. It was also clear that declarations of faith were not enough from the near secular “tyrants” who ruled the Islamic world:

This religion of Islam is not a declaration for the liberation of the Arabs, nor is its message addressed to the Arabs in particular. It addresses itself to all humanity, considering the entire earth its field of work….Islam wants to bring all mankind back to their true Lord, liberating them from servitude to anyone else. From the Islamic point of view, true servitude or worship, takes the form of people’s submission to laws enacted by other human beings….Anyone that serves anyone other than God in this sense takes himself out of Islam, no matter how strongly he declares himself to be a Muslim.

By reminding Muslims of their duty to reform jahiliya, Qutb was able to refute what many Islamic scholars had interpreted as the essentially defensive nature of jihad. These “defeatists…imagine that they are doing Islam a service when they cast away its objective of removing all tyrannical powers from the face of the earth.” Qutb objected to the idea that jihad was restricted to the defense of a territorially defined “homeland of Islam.” To Qutb, the “homeland of Islam” represented “Islamic beliefs, the Islamic way of life, and the Islamic community.”

Since the liberating force of Islam was sure to be opposed, Qutb was clear on the “inevitability” of jihad taking a military form. Jihad was a means of liberating men throughout the world. The work of jihad would eventually provide the world with peace, “the sort of peace which ensures that all submission is made to God alone.”

Qutb also emphasized the importance of a return to ijtihad (the process of reasoning in regard to the interpretation of Islamic law), an activity that was declared “closed” to Sunni Muslims by Islamic scholars of the eleventh century. Again, Qutb was following Ibn Taymiyyah’s lead in declaring that the process of ijtihad must never cease. This stance is now almost universal to modern Islamists, who call for the “reopening of the gates of ijtihad” while rejecting compromises with non-Islamic thought and ways. This approach represents a significant difference from traditional Sunni Islamic practice.

Hassan al-Banna, the founder of the Muslim Brotherhood (he was assassinated in 1949), had sought the Islamization of the Egyptian people before the creation of an Islamic state. Qutb went further, suggesting that an Islamic state should be established by a revolutionary vanguard that would Islamize the state from above. Maududi advanced the same idea for a revolutionary vanguard in a 1955 work. Hassan al-Turabi attempted to implement such a program in the Sudan in the 1980s and 90s through the small but powerful Sudanese Ikhwan organization.

Many Muslim leaders felt that Qutb had gone too far, and his influential work Milestones on the Way (Ma’alim fi al-tariq) was denounced both by the spiritual leader of the Ikhwan and by Al-Azhar University, which condemned the book as heretical. Milestones was written from an Egyptian prison hospital, where the Islamist spent most of his pre-execution sentence after enduring a year of torture and brutality in jail.

Though his legacy is a foundation in the Egyptian/Saudi strain of Islamist militancy, Qutb’s more moderate defenders claim that no writer is responsible for the misinterpretation of his texts by extremists. Indeed, a case can be made that al Qaeda’s “license to kill” was given by Qutb’s interpreter, Abdullah Azzam, who bore the authority of a graduate of al-Azhar when he spoke of the impossibility of social change without the death of “pure, innocent souls.” Qutb aimed for the “liberation of mankind,” which he believed could be accomplished through Islam. The world of jahiliya was to be confronted with “appropriate means,” rather than the dark brutality of Azzam’s disciple, Osama bin Laden. Extremists who cite Qutb rarely mention his Koran-based insistence that there be no coercion or compulsion in matters of religion. Nonetheless, Qutb’s open hostility to the “forces of ignorance” continues to be at the core of radical Islam’s uncompromising approach. A thorough understanding of this will help in combating that ideology at its source.