With the Malian Army still in disarray, the United States urging caution and the Economic Community of West African States (ECOWAS) demanding the formation of a government of national unity before taking military action, a handful of “self-defense” militias from northern Mali are preparing to launch their own reconquest of the regions now controlled by Tuareg rebels and Islamist groups including al-Qaeda in the Islamic Maghreb (AQIM). The formation for this purpose of a militia coalition known as the Forces patriotiques de résistance (FPR – Patriotic Resistance Forces) was announced at a news conference in Bamako on July 21 (Nouvel Horizon [Bamako], July 23). 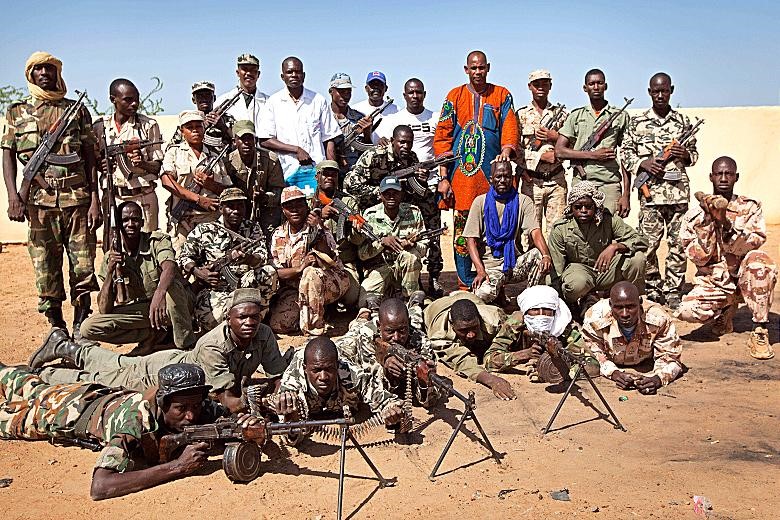 The militias forming the FPR include Ganda Koy (Lords of the Land), Ganda Iso (Sons of the Land), the Forces de libération des régions nord du Mali (FLN – Liberation Forces of the Northern Regions), the Alliance des communautés de la région de Tombouctou (ACRT – Alliance of Communities from the Timbuktu Region), the Force armée contre l’occupation (FACO – Armed Force Against the Occupation) and the Cercle de réflexion et d’action (CRA – Thought and Action Circle). The largest of the groups are believed to be the Ganda Koy, with some 2,000 members, and Ganda Iso, with an estimated 1300 fighters (L’Essor [Bamako], July 26). Ganda Koy militia leader Harouna Touré recently declared; “This war must begin as early as tomorrow with or without the national army” (L’Indépendant [Bamako], July 23). Most of these militias are centered in the Gao region of northern Mali, and are predominantly Songhai, though they also include Peul/Fulani members. After the announcement of a new coalition of militias was made, however, Ganda Iso chairman Muhammad Attaib Maiga issued a statement saying “We do not recognize ourselves as a member of this coalition… We decline any responsibility for the actions that the said coalition will take” (Info Matin [Bamako], July 26).

Another self-defense militia, the “Popular Movement Soni Ali Ber” has been created in Gao by Al-Hadj Tandjina. The movement is named for the first king of the Songhai Empire (c.1464 – 1492) and is intended to “wash [away] the affront of the occupation and recover the flouted dignity and honor of the people of Gao” (L’Observateur [Bamako], July 25). Just outside Bamako, several hundred would-be fighters are training as part of Bouyan Ba Hawi (Songhai for “Death is Better than Shame”), a militia led by Mahamadou Dioura (Jeune Afrique, August 2; Independent August 7).

An officer of Algeria’s Département du Renseignement et de la Sécurité (DRS – Department of Intelligence and Security) has suggested that the defeat of the largely Tuareg Mouvement National de Libération de l’Azawad (MNLA) by the Islamists in Gao is a good development as it will send the Tuareg rebels into the arms of the Malian Army (Jeune Afrique, July 14). However, while MNLA spokesman Moussa ag Assarid recently indicated that the Tuareg rebel movement was ready to fight the “terrorist groups” alongside ECOWAS forces, he was also adamant that they would not fight alongside Malian troops (Le Républicain [Bamako], July 26).

For the Ganda Iso movement of Ibrahim Dicko the real enemy is the MNLA, “which wanted to create a state that we did not recognize. The Islamists, on the contrary, are Muslims like us” (Jeune Afrique, August 3). The Islamists appear to be seeking to divert the anger of the self-defense militias towards the Tuareg of the MNLA by exploiting racial tensions and offering the militias arms to use against the Tuareg. Modern arms appear to be in short supply for the militia fighters, some of whom are training with cudgels rather than Kalashnikovs (L’Essor [Bamako], July 25). The strategy may be working; there are reports (confirmed by both Ganda Koy and Ansar al-Din) that some 400 Ganda Koy fighters based in Douentza have already joined the Islamists of Ansar al-Din (AP, July 15). Ganda Iso took control of Douentza (170 km north of Mopti) on July 13 when it was abandoned by the Islamists but the Malian Army, which has been ordered not to advance beyond Konna, failed to move in to take control at that time.

With the Malian Army having suffered several defeats, the loss of large numbers of defectors to the rebel forces, the staging an unpopular coup and a fratricidal conflict between the “Green Beret” putschists and the “Red Beret” [paratrooper] counter-coup units, desertion has become a major problem in the demoralized military. The Ministry of Defense and Veterans has warned that deserters may be brought before the military courts in accordance with the code of military justice” (L’Essor [Bamako], July 23; L’Indépendant [Bamako], July 23; Nouvel Horizon [Bamako], July 23). According to a member of Special Unit Etia2 (Joint Tactical Echelon) commanded by Colonel al-Hadj Gamou (a Tuareg loyalist); “After the coup, the chain of command gave out. Some subordinates no longer obey their superiors. But it should also be noted that even before the coup, at the command level, there were leadership problems” (PressAfrik.com, July 30). Some Malian troops, rather than focusing on an upcoming campaign against northern extremists and rebels, are using their uniforms to extort money at the Mopti Region checkpoint at Konna from refugees fleeing the Islamist occupation, leading to frequent verbal clashes and further loss of faith in the armed services (L’Essor [Bamako], July 25).

The FPR coalition does not appear to have any official support from the Malian military, but are being sponsored by coup leader Captain Amadou Haya Sanogo, who has been given “former head-of-state” status in return for stepping aside for a new interim government and is alleged to be providing the militias training facilities and instructors, raising the disturbing possibility he intends to form his own private army (Le Temps d’Algerie [Algiers], July 23; Jeune Afrique, August 2).  Both Ganda Koy and Ganda Iso are training close to Sévaré (Mopti Region), where the Malian Army is regrouping. FLN official Amadou Malle asserts that the militia fighters are strictly unpaid volunteers, though it appears some may have been offered places in the Malian military after the northern region has been retaken (L’Essor [Bamako], July 25).

Ganda Koy leader Harouna Touré declared last month that “We are not afraid of death, but we dread shame” (L’Indépendant [Bamako], July 5). Touré insists that the militia coalition was formed without consulting anyone and will not wait for anyone’s permission or collaboration to take action. The main objective of the coalition will be to bring a permanent end to the cycle of Tuareg rebellion and reconciliation that places northern Mali in a permanent state of instability (Septembre 22 [Bamako], July 5).

Though the present state of the Malian military would seem to preclude the possibility of bringing the self-defense militias under control, the government is nevertheless concerned that their impulsiveness will precipitate another round of civil war before the new government is prepared. While a government communiqué cited the “highly courageous initiative of the youth,” it also affirmed that recovery of the occupied territories in the north is a “task of the state and its divisions” (L’Indépendant, July 25).

Militias such as Ganda Koy have notorious reputations for human rights abuses targeted at specific ethnic groups such as the Tuareg, Arabs and Mauritanians of northern Mali (see Terrorism Monitor, April 20). Unleashing them in the north rather than organizing a multinational response to the Islamist occupation is likely to aggravate the security situation rather than stabilize it and may create a poisonous legacy that will ensure years of retributive violence.

This article was originally published in the Jamestown Foundation Terrorism Monitor, August 10, 2012.