An estimated 80% of the two-storey French Embassy in the suburban al-Andlus neighborhood of Tripoli was destroyed by a car bomb in morning of April 23. The massive blast also damaged four neighboring houses. Remarkably, only two French gendarmes were injured in the 7 AM attack, which seemed designed to avoid mass casualties amongst the hundreds of Libyans who assemble outside the embassy later in the morning to seek French visas. No group has claimed responsibility, though the Interior Ministry and Foreign Ministry have both typically blamed Qaddafi loyalists rather than radical Islamists for the bombing (Le Monde, April 26; Xinhua, April 23). The attack may actually have been connected to French operations against Islamist militants in northern Mali. The bombing came one day after France’s decision to extend its military mission in Mali and coincided with a visit to Tripoli by Jacques Myard, chairman of the National Assembly’s Foreign Affairs Committee (al-Sharq al-Awsat, February 24). Islamists in Tripoli and Benghazi expressed their anger with the French intervention in January protests. Since then, there have been concerns in Libya that continued inability to prevent attacks on foreign nationals and facilities in Tripoli and elsewhere in Libya might invite further foreign military intervention (al-Watan [Tripoli], April 24; February Press [Tripoli], February 24).

Libyan officials still see the hand of Qaddafi loyalists behind much of the insecurity in Libya. According to Libyan Defense Minister Muhammad al-Barghathi: “There are enemies inside Libya from the former regime who are still active in undermining the internal situation and influencing some leaders.” In light of the bombing and earlier attacks on the Italian ambassador in January and the fatal assault on the U.S. consulate in Benghazi in September, Libyan Foreign Minister Muhammad Abd al-Aziz concedes the existence of radical Islamists in Libya, but believes “The solution is to have a dialogue with them and to pursue a policy of integration with the families. To use force is not the right approach within the context of the national reconciliation necessary to rebuild Libya” (Le Monde, April 26).

Car-jackings and gunfights between militias have become daily occurrences in Tripoli, which was known for its safety until recently. Libya’s militias are also opposing the development of a free press, a crucial step in the development of a democratic society. Beatings, threats and illegal detentions have all been used to silence attempts to report on militia activities in Tripoli (Reuters, May 1). In recent days the Libyan government has come under siege from the militias and even its own police, making the establishment of a functioning government nearly impossible:

As well as arms, much of the Qaddafi regime’s internal surveillance equipment has fallen into the hands of various Libyan militias. According to Interior Minister Ashur Shuwayil, these militias are now using this equipment to monitor senior members of the Libyan government, the General National Congress (parliament) and members of the media (al-Sharq al-Awsat, April 24). Inside Libya, there is a debate over whether the intimidation practiced by the militias is a useful stimulus to moving the revolution forward or crass manipulation of the political process by politicians looking to expel potential opponents from the government (BBC, April 30).

Libya’s Defense Minister says the government has sought help from Canada, Australia, India, Pakistan, Jordan and Egypt in creating a new professional army to replace the militias. Of these nations, Egypt has been most receptive to Libya’s request, despite experiencing its own breakdown in internal security (al-Sharq al-Awsat, April 24). Libya’s Defense Ministry is seeking to obtain modern, sophisticated weaponry, but must wait another year for UN restrictions on arms sales to Libya to expire. Describing the army of the Qaddafi regime as “a joke,” Defense Minister al-Barghathi maintains that Libya trying to restore security and is “seeking to build an army whose number is proportionate with the population despite Libya’s vast territory, but in ways that lead to units that are small in size but professional and equipped with special weapons—and in which aircraft are used in particular” (al-Sharq al-Awsat, April 24). 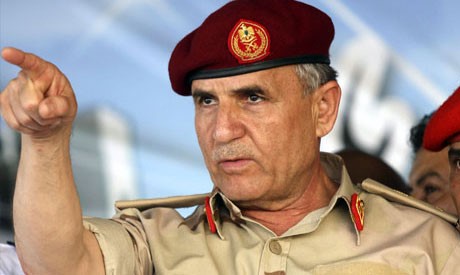 Libyan armed forces chief-of-staff Major General Yusuf al-Mangush continues to face opposition from officers of the new national army, especially in Benghazi and other eastern regions. Though government officials continue to express confidence in al-Mangush, a recent conference in al-Burayqah saw army officers, militia leaders and civilian leaders call for the chief-of-staff’s immediate dismissal and an investigation into missing funds issued to the Libyan Army’s General Staff (al-Watan [Tripoli], April 23). One of the groups represented at the conference was composed of current and former army officers who have organized under the name “Free Libyan Army Officers Assemblage.” The group has called for the elimination of the Libyan Army’s General Staff and its replacement with an independent body of qualified personnel (al-Hurrah [Tripoli], April 20).

At some point, the new government will need to assert its authority if it wishes to end armed attempts to direct the government’s direction. For now, however, the government remains outmanned and outgunned, lacking the firepower advantage normally expected with government militaries. With UN Chapter VII restrictions on arms sales to Libya still in effect for another year, Libya’s government will have to seek other means of restraining the militias, which in at least one sense could be viewed as a favorable development, as an argument could be made that shipping even more arms to Libya might contribute little to solving the nation’s many problems.

This article was first published in the May 2, 2013 issue of the Jamestown Foundation’s Terrorism Monitor.