In the wake of the London poisoning of former FSB Colonel Alexander Litvinenko came unexpected reports that the alleged “terrorist mastermind” and organizer of the September 1999 apartment block bombings in Moscow and Vologodonsk that sparked the current Russian/Chechen war was still active in the North Caucasus republic of Karachaevo-Cherkessia (KCR). Though the two stories appeared to be unconnected, there may indeed be some relation between them. 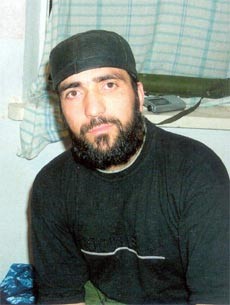 Russian security services allege that Achimez Gochiyayev (a member of the Turkic Muslim Karachai ethnic group) directed the September bombings as retaliation for Russian attacks on “Wahhabi” villages in Dagestan in August 1999. Yet, it seems unlikely that such a carefully planned operation could have been put together in such a short period. Indeed, nearly every aspect of the bombings suggested months of planning by professional saboteurs familiar with the methods used to bring down large buildings. Gochiyayev, a small-time Moscow-based trader (by some accounts), seemed an unlikely leader for such an operation.

Russia’s FSB (the successor organization to the KGB) charges that Gochiyayev was the leader of a gang of Karachai “Wahhabis” and terrorists known as “Muslim Society no. 3” (also known as the Karachaev Jamaat) based in Karachaevsk, Uchkeken and Ust-Dzhigut. In the biography advanced by Russian security services, Gochiyayev led the movement into terrorism, organized the 1999 bombings, became involved in a failed Islamist coup in the KCR later that year and eventually emerged as a powerful rebel and terrorist leader in the first half of the present decade.

In a handwritten disposition dated April 24, 2002 and obtained by Litvinenko and historian Yuri Felshtinsky, Gochiyayev painted a very different picture of his life, beginning with his move to Moscow as a sixteen-year-old in 1986. He eventually married in Moscow, received official residency and opened a food distribution business. According to Gochiyayev, a childhood friend from the KCR capital of Cherkessk posing as a potential business partner (but in reality an agent of the FSB) persuaded him in June 1999 to rent basement units used, unknown to him, for the storage of explosives. After the second bombing, however, Gochiyayev realized that he was an unwilling accomplice in the attacks and called the police with details of the two other basements that he had rented. Police raids on these premises found timers and explosives, thus preventing two further blasts. Gochiyayev claims he was warned by his policeman brother that security services were intent on liquidating him and thus went into hiding, where he has remained ever since. The FSB declared that Gochiyayev’s account “could not be taken seriously,” coming from “a man who has besmirched the calling of an officer of the special services [i.e. Litvinenko]” (Interfax, July 25, 2002). A Chechen group claiming to be investigating the 1999 bombings later claimed that the Gochiyayev account had been obtained by them before copies were stolen from them by an “unscrupulous American journalist” and delivered to Litvinenko (Kavkaz Center, July 26, 2002).

The allegations of FSB’s involvement in the 1999 bombings were taken up by exiled Russian businessman Boris Berezovsky, who funded Litvinenko and Felshtinsky’s investigation and the publication of their book, Blowing Up Russia: Terror From Within. The former oligarch’s personal feud with Putin and mysterious dealings with Caucasus-based kidnapping gangs has made it easier for Moscow to discredit his efforts (and those funded by him) to expose an FSB role in the apartment bombings.

While still on the loose, two other Karachai suspects in the 1999 attacks, Yusuf Krymshamkhalov and Timur Batchiev (both alleged senior members of the “Gochiyayev gang”), confessed in a letter to the commission investigating the bombings that they had participated as “middlemen” in transporting explosives to Moscow. The two claimed that those who recruited them (FSB men under agents German Ugryumov and Max Lazovsky, both killed shortly after) told them the explosives were for use on administrative and military installations, not apartment buildings. The suspects added that reports that the Karachais had trained together in camps run by the Saudi commander of foreign mujahideen in Chechnya, Amir al-Khattab (the alleged financier of the bombings) were false: “We declare, that neither Khattab nor [late warlord Shamyl] Basayev nor someone from the Chechen field commanders and their political leaders, nor any Chechen had any relation to the September terrorist acts of 1999. They did not order, they did not finance and did not organize those terrorist acts. As for Khattab and some other field commanders, we met for the first time only after we escaped to Chechnya…” (“Open Letter to the Commission for the Investigation of the Explosions of Apartment Houses in Moscow and Volgodonsk,” July 28, 2002, published by Novaya gazeta, December 9, 2002). Aside from Gochiyayev, all other alleged members of the bombing conspiracy are presently either dead or in Russian prisons. Though the bombings are typically described in the international press as the work of “Chechen rebels,” none of the accused were Chechen.

From time to time, Gochiyayev’s name has resurfaced in Russian media and federal security reports. The September 2003 allegations that Gochiyayev had been arrested with several Chechen mujahideen in Azerbaijan were denied by Azeri security services (Nezavisimaya Gazeta, August 27, 2003; PRIMA, September 1, 2003). In June 2004, a Karachai “member of Gochiyayev’s gang” named Khakim Abaev was killed in Ingushetia. Two months later, Nikolai Kipkeyev, another Karachai member of “Muslim Society no.3” was killed in Moscow during the course of a subway bombing. Kipkeyev was also alleged to be Gochiyayev’s associate (Interfax, May 12, 2005). In September 2004, Russian media reported that security services suspected Gochiyayev of financing the terrorist operation in Beslan (Moskovsky Komsomolets, September 11, 2004). In May 2005, a group of “Wahhabi terrorists” was killed in a police raid in Cherkessk. The six dead men and women were said to have been “under the command of Achimez Gochiyayev” (Pravda, May 19, 2005; MosNews, May 15, 2005. lenta.ru, May 15, 2005).

In the December 25, 2006 shootout at a Cherkessk block of flats that claimed the life of one alleged rebel, Russian media were quick to note that the cornered gunmen were from “Achimez Gochiyayev’s group” (Regnum, December 25, 2006). While the other fighters escaped the siege, the deceased was identified as Ruslan Tokov, allegedly an aide to Gochiyayev in a campaign led by the latter to murder FSB agents and policemen from the KCR’s Ministry of the Interior (ITAR-Tass, December 25, 2006). Russian TV later added that a second rebel named Saltagarov had been killed, while Gochiyayev himself had left the building only moments before the assault (Channel One TV, December 26, 2006).

The FSB charged that Amir al-Khattab paid Gochiyayev $500,000 in cash to carry out the 1999 bombings. Yet, Gochiyayev has always claimed that he had nothing to do with al-Khattab, and that the photos on the FSB website showing the two of them together were either fabricated or of another man. Litvinenko engaged British forensics expert Geoffrey Oxlee to examine the digitized photos. While Litvinenko insisted (in Oxlee’s absence) that the forensics expert had declared the photos a fake, Oxlee later held short of making such a declaration in an interview with a Russian newspaper, venturing only that the images were “of poor quality” and had been “exposed to digital processing.” In short, the photographic evidence was “inconclusive” (Kommersant, July 27, 2002).

Gochiyayev is often said to be hiding in the Pankisi Gorge, but was not found there during the October 2002 Georgian security sweep of the area. Georgia promised to extradite the fugitive if found (as they did with several other Karachai suspects). FSB Lieutenant General Ivan Mironov stated that captured Chechens revealed during interrogation that they had seen Gochiyayev with Krymshamkhalov at the Pankisi base of late Chechen warlord Ruslan Gelayev (lenta.ru, December 10, 2002).

For over seven years, Gochiyayev’s menacing shadow has loomed over the North Caucasus. He is everywhere but nowhere; always planning new terrorist outrages but staying one-step ahead of the security services. In reality, since his (unwitting or deliberate) role in the 1999 bombings, Gochiyayev cannot be decisively tied to any rebel military operation or terrorist attack in the Caucasus. To the contrary, Gochiyayev denies having any role in the Chechen resistance or the bitter war being waged between the Karachai Islamists and security forces in the KCR.

It is entirely possible that Gochiyayev is already dead. He has not been heard from for four years and there appears to have been no takers for the $3 million reward for his capture offered by the FSB. While the leaders of KCR jamaats and other militant groups make public statements and give interviews (none of which mention Gochiyayev), there is only silence from the fugitive. The banner of Chechen resistance, the Kavkaz Center website, depicts current leaders of rebel leaders across the Caucasus, a pantheon from which Gochiyayev is conspicuously absent. Kavkaz and other resistance websites never mention Gochiyayev as an active insurgent.

Much of Bombing Russia relies on the testimony of Gochiyayev, so it is perhaps not surprising that Russian security forces might resurrect his name as a current terrorist leader just as the Litvinenko poisoning investigation intensified in December. If Gochiyayev were indeed an active resistance leader, this would discredit his account of himself as an innocent patsy of the FSB who has gone underground, fearing for his life. Reviving Russia’s reluctant “terrorist mastermind” as an ongoing threat deals a strong blow to Litvinenko’s version of the events of 1999 just as Bombing Russia is released in a new edition.

This article first appeared in the February 1, 2007 issue of the Chechnya Weekly.