Armored trains have a place in the popular imagination, having been featured in films such as Doctor Zhivago (1965), The Train (1964) and the James Bond thriller Goldeneye (1995). More fantastic armored trains are now encountered in popular video games and Japanese anime. Hundreds of these menacing iron giants armed with formidable naval guns once roamed the expanses of Eastern Europe and Asia, but today there are only four left in service; the Russian Defense Ministry’s armored trains Terek, Baikal, Amur and Don (like the cruisers of the sea, these cruisers of the rails are given individual names). The Terek is the Russian Army’s sole factory-made, purpose-designed armored train, the others having been converted from various civilian rail cars.

A Weapon Built for Russian Expanses

Russia has an extensive history of armored train use, largely due to the difficulty of moving large numbers of troops across the vast road-less regions of early 20th century Russia. Large numbers of armored trains were deployed on the mobile battlefields of World War One’s Eastern Front, but the Russian Civil War of 1917-22 saw a virtual explosion in their use, with over 200 in operation at one point.

Many of the White Russian trains passed into the service of northern Chinese warlords before falling into the hands of the Japanese after their 1931 invasion of Manchuria. Both Russia and Germany deployed armored trains on the Eastern Front in World War Two. Russian armored trains patrolled the wild east Siberian frontier during the Sino-Soviet border conflict of the 1960s and appeared again during the 1990 Nagorno-Karabakh War. During the most intensive phases of the Chechen-Russian War armored trains were successful in performing reconnaissance missions, de-mining operations and the escort of military trains carrying troops and equipment.

The defensive weaknesses of armored trains (vulnerability to ambush, derailment, capture etc.) were recognized early and by 1919 it was common for each Russian armored train to carry a desantniy ortryad (raiding team) that could be quickly deployed alongside train-borne tanks or other armored vehicles. With fire called in by forward observers deployed from the train, the armored train can provide powerful fire-support to drive away or destroy enemy forces. In modern times these raiding teams include BMP-2 infantry fighting vehicles and T-62 or T-72 tanks. While mounted on flatcars, the more vulnerable sides of these vehicles are protected by timber and sandbags. The tanks have a secondary role as tractors in the event of a derailment.

Armored trains may also use small railed reconnaissance vehicles known as draisines to scout the track ahead of the main train.  The trains typically carry the material and trained men necessary to quickly repair damaged track as immobility places a train in danger of ambush or capture. 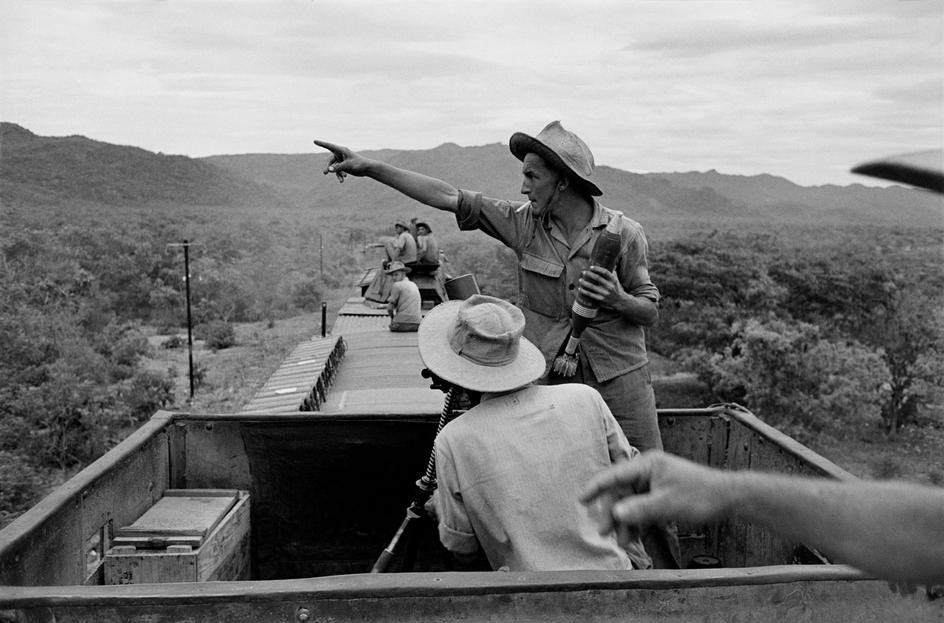 Modern armored trains are vulnerable to air raids or artillery strikes, making them suitable only for counter-insurgency operations where such capabilities are typically unavailable to insurgents. Armored trains were first used for counter-insurgency work by the Austro-Hungarian Army in 1848. Later armored trains were used on counter-insurgency missions by the British against the Boers in South Africa, the Germans against Partisans on the Eastern Front in World War Two and by the French against the Viet Minh in Indo-China. Their use enabled railway troops to secure important transportation links from sabotage and provide fire support to infantry and armor.

Though armored trains have become vulnerable to modern tank tactics and armor-piercing munitions, their rail support allows the trains to carry a weight in weapons and armor that would crush paved roads or have mobility difficulties on certain types of ground. Expendable flatcars (often loaded with sandbags) are typically deployed ahead of the train to absorb the initial impact of explosives or derailment.

Antiaircraft gun of the Armored Train Terek. The Baikal is to the left. This photo was likely taken at the Russian Armored Train base at Khankala, Chechnya. © Photo: otvaga2004.ru

The return of the Russian Defense Ministry’s four armored trains to service after a brief retirement is part of an expensive program to modernize and expand Russia’s armed forces by 2020, though sanctions and economic difficulties have hindered implementation.  The trains were operated by Russian Railway Troops (Zheleznodorozhniki -ZhDk) in the North Caucasus from 2002 to 2009, at which point Defense Minister Anatoly Serdyukov decided the trains had outlived their usefulness as the Chechen insurgency wound down. Serdyukov was sacked over corruption allegations in 2012 and his order to dismantle the trains was never carried out. His replacement, Sergey Shoigu, had seen the trains in action and decided to bring them back into service (International Business Times, August 28, 2015).

The four corps of ZhDk railway troops are under the authority of the Defense Ministry and are responsible for securing and repairing Russia’s railway network during military operations or natural disasters.

There is no sign yet that the Defense Ministry trains will be re-joined by the Russian Interior Ministry’s sole armored train, the largely improvised Kozma Minin, which served in the Caucasus in the periods 1994-2002 and 2011-2012 before being sent for a technological overhaul in 2013. The Kozma Minin operated separately from the Army’s trains, carrying out missions for Interior Ministry forces. 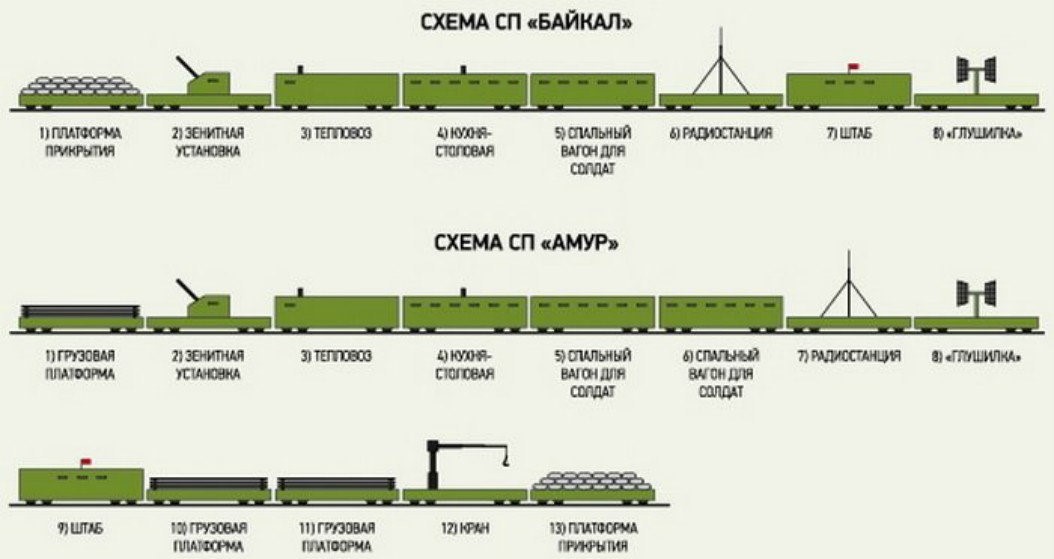 The Defense Ministry’s overhauled armored trains now include an electronic warfare wagon capable of jamming enemy communications and radar. New tactical protocols now allow the trains to operate in tandem with helicopter support, a potentially lethal combination for insurgents operating anywhere close to the railway system (Sputnik News.com, August 15, 2016). Russia’s armored trains have also been fitted out with anti-mine technology, including the Kamysh M4K system, which uses white noise to interfere with radio-controlled IEDs at a distance of up to 20 meters. Firepower is now provided, not by naval guns, but by powerful, rapid-firing twin 23 mm ZU-23 anti-aircraft guns (MK.RU, August 12, 2016). These guns are protected by shields and their crews have access to armored shelters on both ends of the gun-car. Heavy use of camouflage nets helps reduce the visibility of the armored trains as targets. 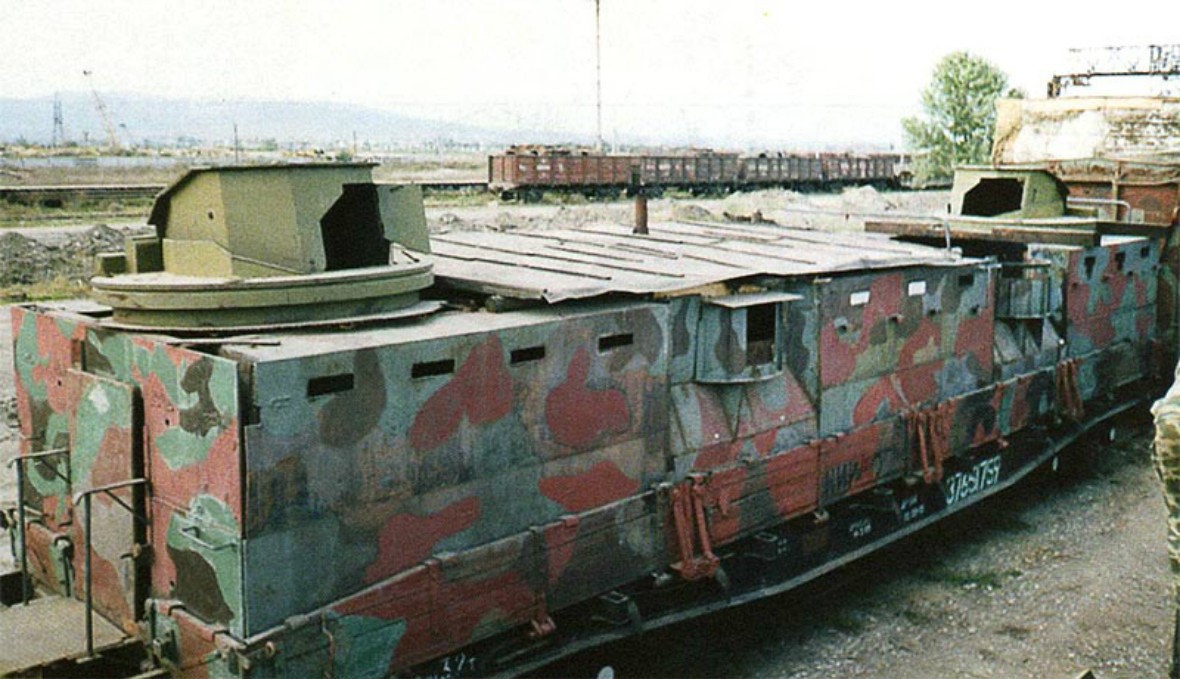 Amur and Baikal undertook intensive drills in Volgograd, Krasnodar, North Ossetia and Crimea in August 2016. One of the high points of the exercise was the construction by railroad troops of a 1300-foot long pontoon bridge over the Volga capable of supporting the armored trains (Russia Today, August 17, 2016; Video of the operation at Vesti.Ru, August 17, 2016).

Russia is also re-introducing military trains equipped with the new MS-26 Rubezh light intercontinental ballistic missiles (ICBMs), armed with multiple nuclear warheads (the whole system is known as “Barguzin”). An earlier version of these missile trains was deployed from 1984 to 1994, but the enormous weight of these missiles damaged the rail system and the entire project was shut down in 2005, partly due to strategic weapons treaties (Russian Beyond the Headlines, May 17, 2016).  The new, much lighter missile trains will be disguised by the inclusion of normal freight cars and wagons in the train to prevent their easy detection from space (Independent, November 23, 2016).