As the political and military situation deteriorates in Mali following a poorly-planned coup by junior officers and the subsequent occupation of nearly all northern Mali by Tuareg rebels and various tribal allies there is increasing discussion of the possibility of a military intervention to restore order and prevent Mali’s unrest from spilling over its borders.

The most likely source of a military intervention would be the Economic Community of West African States (ECOWAS) and its military arm, the ECOWAS Monitoring Group (ECOMOG).

ECOWAS has put 2,000 troops on standby (Le Proces Verbal [Bamako], April 2). The military chiefs-of-staff of the ECOWAS states are meeting in the Ivoirian capital of Abidjan on April 5 to discuss the creation of an intervention force (AFP, April 3).

The African Union has endorsed the ECOWAS decision to activate the planning process for a possible deployment of a brigade of troops to “protect the unity and territorial integrity of Mali” (PANA Online [Dakar], April 4). In the meantime ECOWAS has instituted a comprehensive embargo on the Malian regime. According to the ECOWAS chairman, Côte d’Ivoire president Alassane Dramane Ouattara: “All the diplomatic, economic, and financial measures are applicable as of today and will be lifted only when the constitutional order is actually restored” (L’Essor [Bamako], April 4).

The ECOWAS chairman has stated that several West African states have already pledged troops for an intervention force, adding that: “We would like to ensure the integrity of Malian territory. We shall use all means at our disposal to stop this rebellion, and to restore Mali’s territorial integrity. It is the sub-region’s duty” (Le Patriote [Abidjan], April 2). 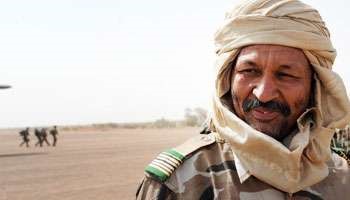 Junta leader Captain Amadou Haya Sanogo announced the restoration of the 1992 Constitution on April 2, but so far this appears to be an attempt to mollify international opposition rather than return Mali to its democratic course (L’Indicateur du Renouveau [Bamako], April 2; L’Essor [Bamako], April 2). In an especially troubling development for the coup leaders, Colonel al-Hajj ag Gamou, the military chief-of-staff in Kidal region and a highly capable leader of a pro-government Tuareg militia, has declared his allegiance to the MNLA rebels (L’Indicateur du Renouveau [Bamako], April 2). The rebels appear to have already seized large stockpiles of arms from captured garrisons in the north.

ECOWAS is demanding a return to constitutional order and a transfer of power to the Speaker of Parliament, Professor Dioncounda Traore, in accordance with article 36 of the Malian constitution. For now, however, there is every sign that the junta plans to remain in power. Despite the crisis in the north, the military junta in Bamako is insisting on going ahead with prosecutions of President Amadou Toumani Touré and other leading political figures on charges of treason and corruption.

ECOMOG has been involved in three previous military interventions with varying degrees of success – Liberia in 1990, Sierra Leone in 1997 and Guinea-Bissau in 1999. [1] There was also a brief ECOWAS deployment in Liberia in 2003. In the past, ECOMOG has been dominated by Nigeria’s military, the largest and most powerful in the region, usually in partnership with the militaries of other Anglophone West African nations. An intervention in Mali, a Francophone state and former French colony, would require larger participation from West African Francophone states, probably with Senegal in the lead.

With Mali increasingly isolated financially and diplomatically and a growing rift between Tuareg rebels of the Mouvement National de Libération de l’Azawad (MNLA) and the Islamist rebels of Iyad ag Ghali’s Ansar al-Din movement, there seems little possibility of an internal solution being found for Mali’s difficulties in the near future.

Despite pursuing an alarmist interpretation of the Malian crisis in which al-Qaeda controls the rebels and is planning an invasion of southern Mali to implement a Shari’a state, French foreign minister Alain Juppe has said there is no possibility that France would intervene directly in Mali, though it could provide logistical support to an ECOWAS force. Juppe has also urged a greater role for Algeria, which is constitutionally prohibited from participating in military interventions outside its borders (AFP, April 3). France maintains garrisons in Senegal and Côte d’Ivoire, but according to Juppe, “We can help with logistics or training but there is no question of putting French soldiers on Malian soil” (AFP, April 2). Washington has supported ECOWAS interventions in the past and may also provide logistical support in the event of a military intervention in Mali.

This article was originally published in the April 5, 2012 issue of the Jamestown Foundation’s Terrorism Monitor.