With a growing debate over the role of Saudi-inspired Salafism in the development of Islamist extremism, it is worth examining the career and continuing influence of Yasir Hussein al-Borhami, one of Egypt’s most prominent Salafists. Despite the rigid ideology associated with Salafism, Borhami has proved flexible and pragmatic in ensuring a continued political presence for Egypt’s Salafists in a politically volatile atmosphere. Nonetheless, opposition to his approach has led to threats of violence from both Brotherhood supporters and fellow Salafists. Copts and more secular Egyptians also oppose Borhami’s intention to apply Shari’a across Egypt. 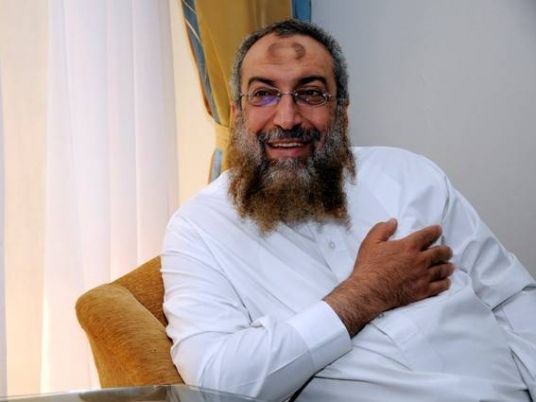 Yasir Hussin Borhami. The bump on his forehead is known as a zabiba (“raisan”), caused by repeated contact of the forehead with the ground during prayer and is regarded as a sign of piety by some Egyptian Muslims.

Borhami was born in the Beheira region of the Nile Delta in 1958, the son of a member of the Muslim Brotherhood who imprisoned by President Gamal Abd al-Nasser. The young Borhami pursued degrees in medicine (pediatrics) at Alexandria University and aqida (“creed”) studies (which focus on the essential beliefs of Islam) at Cairo’s al-Azhar University. While still in college, Borhami performed the pilgrimage to Mecca, where he encountered a Salafist scholar who would be a great ideological influence, Abd al-‘Aziz bin Baz (Grand Mufti of Saudi Arabia – 1993-1999) (Ahram Online, December 19, 2011). Borhami opened a clinic in Alexandria and preaches at Alexandria’s al-Khulafa al-Rashidun mosque. [1]

In 1984, Borhami became one of the six founders of Alexandria’s Da’wa al-Salafiya (Salafist Call), a movement that would borrow aspects of the Muslim Brotherhood’s preference for social organization and action, but not its structure or political aims.

Though there are many schools of Salafism even within Egypt, there is a shared trend towards a literal interpretation of core Islamic texts (the Qu’ran, Sunna, hadith-s, etc.) supplemented by the work of a few later scholars who sought to eliminate religious innovations (bidah) from Islamic practice. In this sense, Salafists view themselves as rational modernists rather than the popular Western perception that they are arch-conservatives seeking to live in the past. This approach to Islam, which habitually puts the movement at odds with many other Islamic trends, began to gain currency in Egypt in the 1970s, particularly in Alexandria. Traditionally, the Salafists have been apolitical based on a tradition of obedience to rulers, giving them a certain room in Egyptian society unavailable to other religious trends viewed as a challenge to the state (such as the Muslim Brotherhood). The movement has proved attractive to professionals and uses modern technology (such as its Ana Salafi website) to disseminate its message.

During the Mubarak era, the Alexandria Salafists were watched carefully but tolerated so long as they steered clear of violence and politics. Travel restrictions and occasional arrests served as reminders of the regime’s watchful eye. In 1987, Borhami was arrested in connection with the attempted assassination of former Interior Minister Hassan Abu Basha, though he was only held a month (Ahram Online, November 19, 2011). In 1994, the government decided the Salafist Call was posing a threat to the existing order and cracked down, imprisoning hundreds and banning the group’s activities. Borhami responded by lowering the group’s profile until restrictions eased in 2004. With the movement reinforced by newly-freed preachers and activists, Borhami now began an intensive period of organizing, leading to the Salafist Call finally obtaining state recognition as a legitimate social organization in April 2011. [2]

The Formation of al-Nur

Borhami is closely associated with Egypt’s leading Salafist political party, al-Nur (“the Light”), formed in June 2011 by Imad Abd al-Ghaffour. By December 2012, leadership had passed under pressure into the hands of Yunis Abd al-Halim Makhyoun, a Borhami loyalist, with al-Ghaffour and 150 members resigning to form the Watan Party. With loyalists in place in top party positions, the move gave Borhami effective control of the Party without being part of its official leadership. In theory, the Salafist Call pursues a more cooperative and collective method than the more hierarchal Muslim Brotherhood; in practise, personal loyalty to Borhami is almost essential to penetrate the leadership of both the movement and its political expression, the Nur Party.

By leading his movement into politics, Borhami intended to press for a Shari’a state without reliance on the Muslim Brotherhood while attempting to diminish the appeal of radicalism in the movement’s younger members.

Salafism and the Egyptian Revolution

The Salafists played only a minor role in the 2011 Revolution, most preferring to maintain a traditional apolitical stance, though individual members joined the protests in Tahrir Square that ultimately compelled the overthrow of President Mubarak by the Egyptian military.

In the parliamentary elections that followed the Revolution, al-Nur shocked the nation by forming a coalition with three smaller Salafist parties to take 24% of the vote, making the party the second-largest block in parliament after the Muslim Brothers’ Freedom and Justice Party. Though Borhami opposed the participation of women and Christians in politics, he opened up the doors of the Nur Party to both as candidates in the election after their inclusion became legally required.

In the first round of the presidential election, Borhami steered al-Nur into support of Abd al-Moneim Fotouh rather than the Muslim Brotherhood’s candidate, Muhammad al-Mursi. In the run-off, however, al-Nur switched its support to Mursi against the candidacy of Mubarak-era premier Ahmad al-Shafiq in the second round, won handily by Mursi.

The Presidency of Muhammad al-Mursi

As the post-Revolution Mursi government faltered under economic and security pressures, Borhami’s feud with the Brotherhood intensified, with the Salafist leader warning the Brotherhood would pay the price for Mursi’s stubbornness in rejecting Salafist attempts to mediate a solution to the crisis (al-Masry al-Youm, March 15, 2013).

Under Borhami’s influence, the Nur Party approached the demonstrations against Mursi with caution, staying aloof but ready to join the opposition to the Brotherhood if the winds proved favorable. By the time Mursi was overthrown by General Abd al-Fatah al-Sisi on July 3, 2013, al-Nur was ready to display its full backing of the coup on public television. The decision to stand side-by-side with the Coptic Pope and human rights advocate Muhammad al-Baradei was met with outrage by both the Brotherhood and fellow Salafists outside the Nur Party who viewed Mursi as al-wali al-amr, a community guardian legitimized by Shari’a. Borhami considered Mursi to be a mere political figure and dismissed the opposition to al-Nur’s stance: “Maybe we lost some support from within the Islamic movement, but many have admired the party’s policies” (Reuters, January 23, 2014). [3]

After the Egyptian military’s slaughter of hundreds of Brotherhood supporters at two Cairo sit-ins, Borhami absolved al-Sisi of any blame, saying it was impossible for the general, “a religious man of high ability and competency,” to have issued a command to kill all protesters (Ahram Online, January 21, 2014; al-Masry al-Youm, January 26, 2014). Borhami laid the blame directly at the feet of the Brotherhood, saying they had encouraged their members to face bullets to create massive casualty counts that would discredit the army (Ahram Online, January 21, 2014).

Borhami opposed Islamist protests against al-Sisi in the summer of 2013 and claimed Western criticism of the general’s methods was in fact an attack on Egypt and Islam as a whole: “[The Islamists] should admit that the military saved the people from civil war in which millions of people were against Islamists” (al-Masry al-Youm [Cairo], August 27, 2013). By early 2014, the rift with the Brotherhood had grown so much that calls to attack Borhami began to appear on Brotherhood Facebook sites (al-Sharq al-Awsat, January 4, 2014).

In early February 2014, Borhami declared that the Salafist Call would not support al-Sisi’s candidacy for president, though it would not oppose him (Ahram Online, February 1, 2014).

There is often some confusion regarding the actual content of Borhami’s fatwa-s as he commonly backs away from controversial rulings when they appear to be out of step with the rest of Egyptian society, including the religious current. One such example was Borhami’s fatwa against the 2014 FIFA World Cup, which the shaykh claimed would distract Muslims from their prayers and encourage Muslims to admire non-believers playing for foreign teams. When his ruling was widely ridiculed in soccer-mad Egypt, failing even to gain support from other religious leaders, Borhami backed away, claiming he only meant to say “don’t waste your time” (International Business Times, April 27, 2014; al-Masry al-Youm, June 15, 2014).

Other rulings that have, at times, gained international attention, include:

Among Borhami’s most pressing concerns are “radical secularism” and fears that Iran will spread Shi’ism to Egypt, where the small existing Shi’a community is closely monitored by the Salafi Call in cooperation with security services.  This collaboration with security forces has opened rifts with the rest of Egypt’s Islamists, including some members of the Nur Party.

Al-Nur was targeted by the “No to Religious Parties” campaign that preceded the election. Supported by Egypt’s Ministry of Endowments, the campaign collected 1.25 million signatures in support of its claim that religious parties violated the section of the Egyptian constitution banning the formation of political parties “on a sectarian basis…” (Daily News Egypt, October 11, 2015). Borhami’s view was that the new constitution declared Egypt was an Islamic nation, making Islamic political parties permissible.

In contrast to their earlier success, the Nur Party was crushed in the 2015 election. After a poor showing in the election’s first phase, Borhami pleaded with Salafi leaders to urge their followers to the polls, but many Egyptian Salafists had had enough of politics. With only nine seats taken by the election’s conclusion, Borhami accused the government of detaining Salafist candidates and orchestrating a hostile media campaign, but many former party members cited the party’s political flexibility as the real reason for the party’s poor performance (al-Masry al-Youm, November 25, 2015; Reuters, November 23, 2015). One failed Nur candidate blamed the controversial fatwa-s issued by Borhami and other Salafist Call leaders for the failure (al-Masry al-Youm, October 25, 2015).

Relationship with the Islamic State

The Salafist Call has publicly condemned Salafi-Jihadism and radical Qutbist ideology, preferring a method of collective action over violence in the establishment of a Shari’a-based state. The movement believes greater religious education is the key to prevent radicalization of the sort that has led to the creation of an Islamic State chapter in the Egyptian Sinai.

Borhami insists the Salafi-Jihadis of the Islamic State do not belong to any particular Islamic trend, preferring to believe they are the natural result of human rights violations. Salafi preacher Muhammad al-Abasiry recently claimed that Borhami’s students have already joined Islamic State forces in Syria (Daily News Egypt, December 20, 2015).

Borhami has undoubtedly committed many missteps that have damaged the popularity of the Nur Party and the Salafist agenda, though some of these are no doubt due to the difficulty of forming political policy in a party based on a traditionally apolitical sector of Egyptian society. What is perhaps more damaging is public realization that the Salafist Call is prepared to use democracy in order to institute non-democratic reforms. Borhami has asked “Is anyone afraid of Shariʿa, the Shariʿa that achieves justice, welfare, and wisdom?” (al-Shorouk [Cairo], June 30, 2012).  The better question might be, “Is anyone afraid of a religious minority eager to impose their own version of Shari’a on a multi-confessional Egyptian state?” Last year’s election results appear to give the answer as “Yes.”

This article first appeared in the January 2016 issue of the Jamestown Foundation’s Militant Leadership Monitor.