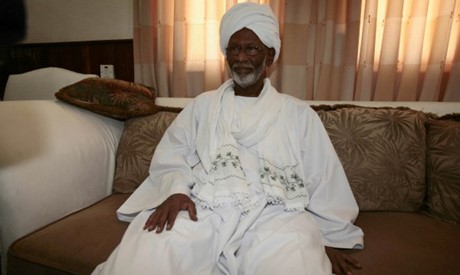 In a recent interview with a pan-Arab daily, Dr. Hassan Abdullah al-Turabi, the former leader of the Sudanese Ikhwan (Muslim Brotherhood) and the nation’s leading Islamist, predicted the sudden and imminent collapse of Sudan’s current military/Islamist regime and its replacement with an Islamist government:

My personal assessment is that [the regime in Khartoum] is going to collapse and fall. The country is torn up, there are threats of severing other parts of it, and there is no freedom. Suppression leads to explosion, and the economic crisis is exerting severe pressure on the people. This kind of tension in most cases brings in revolution. The situation of the regime is very bad; it is abject, hunted down, politically isolated, and criminally accused by the world; and internally it is as you can see. I expect it to collapse suddenly… I beseech God that the opposition is prepared, because if the regime collapses, we will move from an odious regime to chaos, and the situation will be worse than it is in Somalia, because of the lack of something that unites the Sudanese (al-Sharq al-Awsat, November 1, 2012).

Al-Turabi is the Sorbonne-educated pioneer of modern political Islam in the Sudan and the former sponsor of Osama bin Laden’s presence in that country in the 1990s. Today, he is the leader of the People’s Congress Party (PCP), an Islamist faction that broke away from the ruling National Congress Party (NCP), headed by President Field Marshal Omar al-Bashir (wanted by the International Criminal Court) and effectively managed by al-Turabi’s former Ikhwan deputy, Ali Osman Muhammad Taha.

One of Sudan’s most controversial political figures, al-Turabi is disliked by many Sudanese for his central role in introducing Islamic law in Sudan in the early 1980s as Attorney General in the government of dictator General Ja’afar Nimieri. Turabi’s Islamic legal code, the notorious “September Laws,” were strongly criticized within Sudan for their emphasis on punishments such as amputations and crucifixions and their failure to address issues of social justice, the establishment of which is generally regarded as a necessary precursor to the implementation of harsh huduud punishments. Al-Turabi’s push for nation-wide Shari’a is often cited as one of the main causes behind the Sudan’s return to civil war in 1983, a conflict in which over two million Sudanese perished.

Al-Turabi also revealed he fears he is the potential target of a Western assassination attempt. “The West hated Islam and hence it killed Bin Laden and it only has al-Turabi [left] now. They have hit me in Canada, but it was not yet my time of death” said al-Turabi, referring to a 1992 assault on the Islamist by a Sudanese karate champion in an Ottawa airport that left al-Turabi hospitalized for a month. Though his attacker claimed the assault was a spontaneous reaction to seeing the Islamist leader in the airport, al-Turabi now seems to have woven the attack into a larger Western conspiracy to eliminate him.

The Sudanese Islamic Movement split in 1999, leading to the existence of two wings, the ruling National Congress Party (NCP) and al-Turabi’s Popular Congress Party (PCP). Since the split, al-Turabi has had a contentious relationship with the regime, leading to several terms of imprisonment, most notably in 2009, when al-Turabi supported the ICC indictment of President Omar al-Bashir on war crimes charges.

According to al-Turabi, the Sudanese opposition has “agreed that this regime is hopeless, and we have to work to remove it completely. Now, our priority is to overthrow the regime, and our methods are peaceful. We have learned a lesson from the military coups d’état, as whoever stages a coup d’état [finds] it is turned against him” (al-Hayat, October 19, 2012).

Elsewhere, al-Turabi has maintained that of Sudan’s opposition groups, only the Islamists have the organization and grassroots support needed to take power in the aftermath of an impending popular revolution (al-Jazeera, October 14, 2012). Reflecting on the 1989 coup that brought Omar al-Bashir into power with the support of al-Turabi and the Ikhwan, the Islamist leader concedes that “with hindsight we have said: ‘This was wrong, wrong;’ change ought to have happened through a popular revolution.” Al Turabi’s enthusiasm for a popular revolution in Sudan is not shared by all the opposition elite; former prime minister and leader of the Umma Party Sadiq al-Mahdi has warned that such a revolution would lead to the breakup of what remains of the country (Sudan Tribune, October 15, 2012).

While al-Turabi foresees an Islamist takeover in Sudan, the ruling NCP is busy replacing Sudan’s transitional 2005 constitution with one that would establish Sudan as an Islamic state, a change promised by al-Bashir in the event that the largely non-Muslim South Sudan voted for separation. The opposition has refused to partake in talks regarding the creation of an Islamic constitution until the NCP is replaced by a more representative transitional government, but the NCP has warned it “doesn’t want any disagreement” over the issue (Sudan Tribune, October 31, 2012).