Al-Qaeda has never attempted to seize and hold strategic territory, but this may be about to change, according to an audiotape message from the deputy leader of al-Qaeda in the Arabian Peninsula (AQAP). In the 12-minute statement, Sa’id al-Shihri (a.k.a. Sufyan al-Azidi) outlined a new strategy that would involve Islamist fighters from Somalia working in coordination with AQAP fighters in Yemen to secure both sides of the vital strait (al-Malahim Establishment for Media Production, February 8). 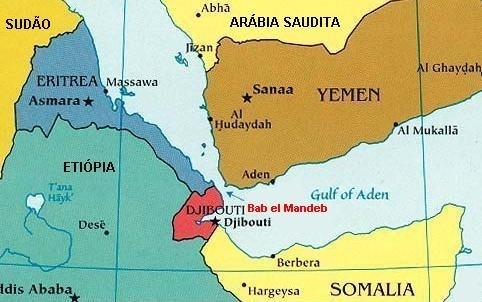 Some 30% of the world’s annual trade passes through the narrow Bab al-Mandab (“The Gate of Tears,” thanks to its navigational hazards). Passing Djibouti and Eritrea on the west and Yemen on the east, the strait connects the Indian Ocean to the Mediterranean via the Red Sea and the Suez Canal. Commercial ships entering or leaving the southern end of the Bab al-Mandab must already contend with pirate-plagued shipping lanes in the Gulf of Aden.

Al-Shihri suggested that controlling the Bab al-Mandab and bringing it “back under the protection of Islam” would “create a great victory and international power for us… Then the strait will be closed and the grip will be tightened around the throat of the Jews, because the U.S. supports them through [the strait], by means of the Red Sea in particular.” Al-Shihri claims “the Jews” are mobilizing their agents to oppose this, especially those in the “agent governments” of Egypt and Saudi Arabia. Al-Shihri mentions in particular Egypt’s Lieutenant General Omar Sulayman, the director of the Gihaz al-Mukhabarat al-Amma (Egyptian General Intelligence Services) since 1993.

Following the offer of Somalia’s al-Shabaab Islamist movement to send fighters to join AQAP in Yemen, al-Shihri praises his “great brothers in Somalia” and says they will operate on two fronts in the upcoming battle with the United States. “You and we are standing on the two banks of the Bab al-Mandab… We shall expel our enemies. We should complete each other in our war against our enemies, until God grants us victory or martyrdom, God willing.” 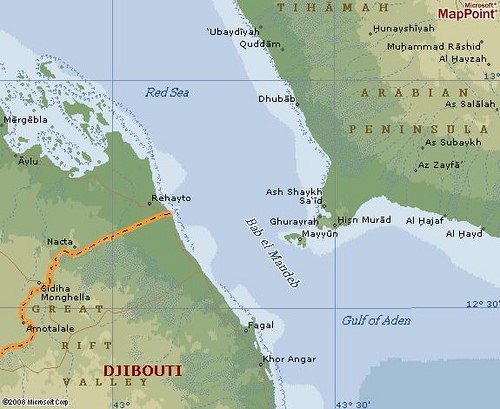 Elements of the Arab press quickly pointed out that al-Qaeda’s ambition may be beyond its reach. “Control of the Bab al-Mandab might not be easy, especially as it does not possess heavy weapons and modern boats that can be used for this purpose, but this does not mean it does not possess the logistical capabilities that can disrupt navigation in this vital international passageway” (al-Quds al-Arabi, February 9). Nevertheless, Yemeni government officials said all such threats were taken seriously (al-Hayat, February 9; 26Sep.net [Yemen Defense Ministry], February 10).

Somalia’s Minister of Information, Dahir Mahmud Gelle, urged the international community to take steps to eliminate AQAP and al-Shabaab to avert the risk to the global economy posed by a seizure of Bab al-Mandab (Radio Gaalkacyo, February 10).

This article first appeared in the February 19, 2010 issue of the Jamestown Foundation’s Terrorism Monitor.