Three months after the end of the Israeli/Hezbollah war, there is growing tension between Hezbollah and the “March 14” anti-Syrian political coalition that dominates the Lebanese government. In an October 31 interview with al-Manar TV and al-Nur Radio (Hezbollah-owned media sources), Hezbollah leader Sheikh Hassan Nasrallah offered his perspective on the current political and security situations. 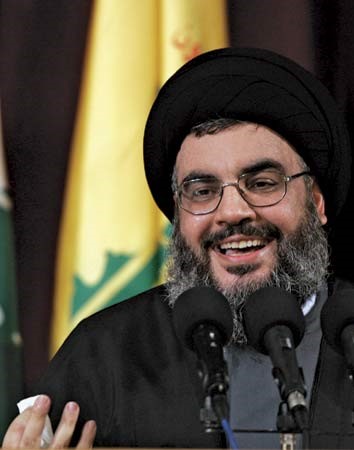 According to Nasrallah, the United States intends to make Israel the dominant country in the Middle East. Nasrallah goes on to suggest that speeches from the U.S. administration on human rights, democracy and freedom are mere deception, designed to disguise its true intention—to seize control of regional resources. This plan is currently “in a state of collapse and a state of decline,” while U.S. efforts in Iraq represent “a clear military failure,” a view no doubt reinforced since by the result of U.S. mid-term elections and the resignation of U.S. Defense Secretary Donald Rumsfeld. Iraqi resistance to the United States and its coalition is “legitimate and correct,” but the Hezbollah leader refutes the extremism practiced by certain factions (without naming them); Hezbollah makes “a distinction between military actions that target the occupation forces and the criminal actions that target innocent people and Iraqis and that shed blood citing illegitimate justifications.” Drawing on the examples of the U.S. withdrawal from Vietnam and the Israeli withdrawal from South Lebanon in 2000, Nasrallah warns collaborators of the fate suffered by the South Vietnamese and South Lebanese Army when they found themselves abandoned by their patrons: “They will leave them to face their fate, as they did with all those who wagered on them in the world and throughout history.”

Nasrallah notes the inactivity of the Lebanese Army in disarming Hezbollah. The army is what the sheikh describes as a “national [wataniyah] institution…Consequently, the Lebanese Army moves only in the area indicated by the army commander…the area of consensual national will.” The comments suggest that the Hezbollah leadership is satisfied with the army’s restraint on disarmament in defiance of the wishes of the Lebanese government. Nasrallah even claims it was Hezbollah and Shiite political party Amal (led by Parliamentary Speaker Nabih Berri) that requested the presence of the Lebanese Army and a beefed-up United Nations Interim Force in Lebanon (UNIFIL) in southern Lebanon.

Throughout the interview, Nasrallah accuses the March 14 coalition of seeking a multinational military deployment in Lebanon acting under Chapter VII of the United Nations Charter. Chapter VII asserts the right of the UN Security Council to invite the armed forces of member states to intervene militarily “to maintain or restore international security” (Article 42). The coalition’s alleged intention was to permit a multinational force (“I do not want to call them by their real name, the NATO forces”) under U.S. or French command (outside of UN control) to enter Lebanon. The multinational force would deploy along all the borders and throughout the country, effectively acting as an occupation force in the interests of Israel, the United States and Lebanon’s March 14 coalition. Nasrallah claims that when the conflict began on July 12, the Lebanese government contacted Hezbollah to inform them that meeting three conditions was the only way to avoid a war that would severely damage Lebanon and ultimately destroy the Shiite movement. The first condition was to allow a Chapter VII deployment; second, to disarm the Islamic Resistance (the armed wing of Hezbollah); third, to hand over the Israeli prisoners unconditionally. In Nasrallah’s view, it is only the willingness to fight displayed by the Islamic Resistance that has allowed Lebanon to avoid a humiliating post-colonial occupation of the country. The sheikh warns that a Chapter VII deployment would turn Lebanon into “a new Iraq.”

Despite warnings from UNIFIL’s French commander that French forces might fire on Israeli overflights of Lebanon made in violation of the cease-fire agreement, the Israeli Air Force continues to fly unopposed over Lebanon. According to Deputy Minister of Defense Efraim Sneh, Israel’s “reconnaissance flights” will continue until the two Israeli soldiers are released and Israel receives confirmation that arms shipments from Syria have ceased (Zaman.com, November 2). There is no doubt that the sonic booms of Israeli warplanes over Beirut are meant to provide a political message to Lebanon’s leaders as well as intelligence for Israel’s military.

Throughout the interview, Sheikh Nasrallah stressed the role of Hezbollah as a nationalist rather than a sectarian movement, capitalizing on the inter-faith solidarity that developed in some (but not all) quarters during the weeks of Israeli air and ground attacks. “What difference is there between me and the Sunnis in order to raise the issue of sectarianism? How do I, as a Muslim, differ from the Christian who cares for the oppressed people and for the Church of the Holy Sepulcher in the same way as [a Muslim] cares for the al-Aqsa Mosque? He also wants Lebanon to be strong, independent, master of itself and free.” Nasrallah’s suggestion that the March 14 alliance is still trying to transform UNIFIL to a non-UN multinational occupation force usefully places Hezbollah at the forefront of the Lebanese struggle for independence and self-determination. Hezbollah’s armed wing is described as “a resistance, not a militia,” in other words, a national element serving the defense of Lebanon from external aggression. While the Lebanese Army has the courage and will to resist aggression, “it does not have the required facilities, the required tanks and the needed anti-armor missiles, nor does it have anti-aircraft missiles.” Aside from tanks, Hezbollah has all these weapons in abundance.

Nasrallah’s opponents in the March 14 alliance continue to assert that Hezbollah is nothing but a tool of Syrian regional ambitions. Nasrallah, of course, has no desire to see any kind of international military force deploy along the Syrian-Lebanese border, where Syrian and Iranian military supplies continue to flow to Hezbollah with little hindrance from the Lebanese Army. At present, there are no signs that UNIFIL or the Lebanese Army will attempt to disarm Hezbollah under the conditions of UN Security Council Resolution 1701.

Sheikh Nasrallah refutes claims that Hezbollah and its Amal and Christian allies seek to mount a coup against the present regime: “In matters of blood, we are at the forefront. In matters of power, we do not seek authority.” Greater representation for the Shiites in the Lebanon government is nevertheless inevitable, given their military strength, growing numbers and organizational skills.

This article first appeared in the November 15, 2006 issue of the Jamestown Foundation’s Terrorism Focus.