After years of mutual hostility, the armed forces of two states and the armed militias of one failed state are poised to unleash a potentially devastating war in the Horn of Africa. Ethiopia, Eritrea and Somalia are each moving troops up to their borders in preparation. All parties have agreed to a third round of Arab League-brokered peace talks in Khartoum this week. The negotiations may represent the last opportunity to avoid the outbreak of a general war in the turbulent and highly strategic Horn region. 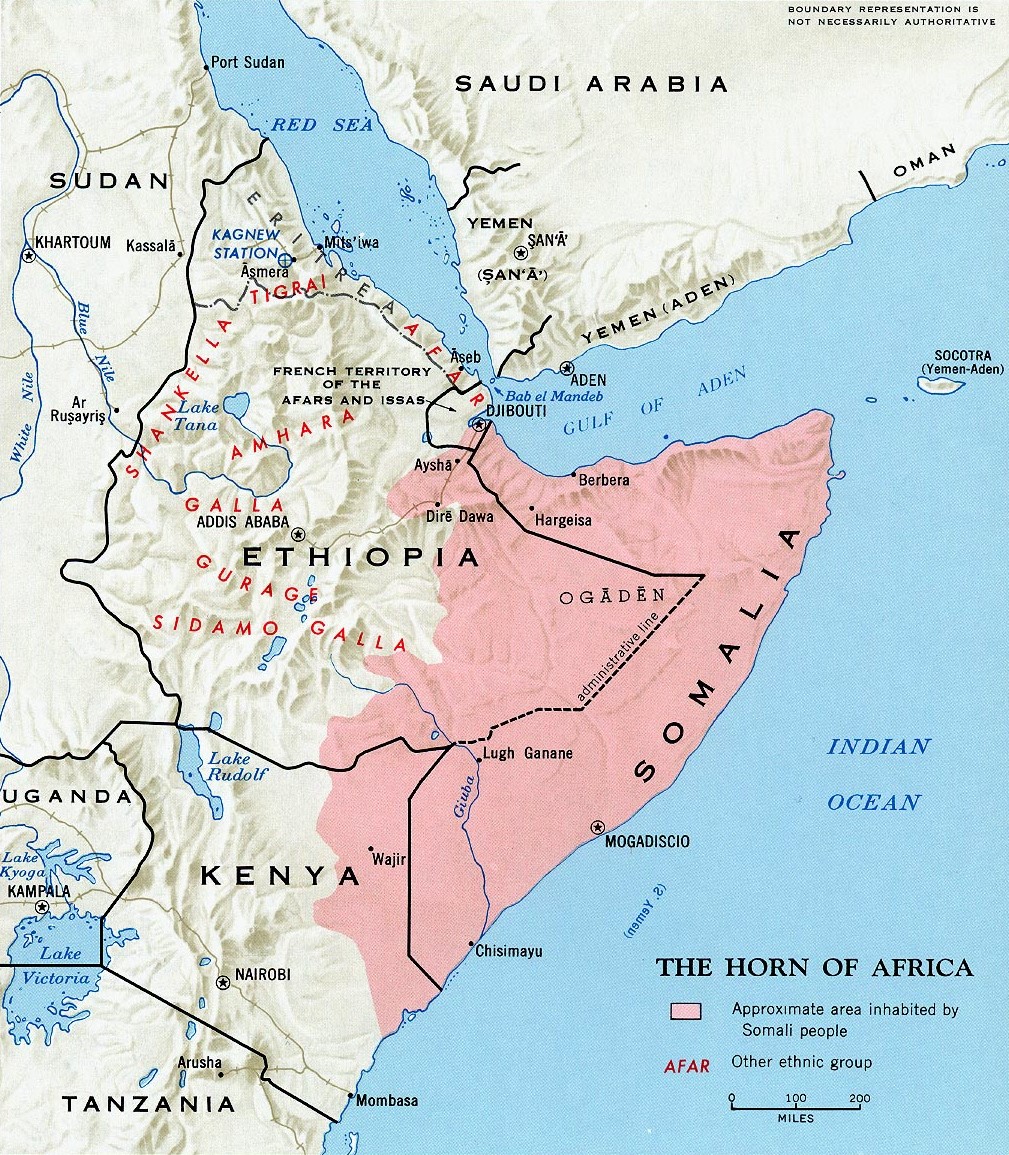 The importance of these talks is reflected in the decision to invite the Inter-Governmental Authority on Development (IGAD) to join mediation efforts (Shabelle Media Network, October 22). IGAD is an important regional assembly of seven East African countries that negotiated the formation of Somalia’s Transitional Federal Government (TFG) in 2004. The TFG is now isolated in the Somali town of Baidoa, where its existence relies on the support of Ethiopian troops and various Somali militias. Soldiers of the Islamic Courts Union (ICU), Somalia’s coalition of militant Islamists, are now poised for an attack on the makeshift capital where TFG leaders are engaged in bitter disputes with each other. Fighting has already broken out between the Islamists and combined TFG/Ethiopian forces for control of the approaches to Baidoa.

There is a strong irredentist strain in ICU politics based on the goal of creating a “Greater Somalia,” incorporating the ethnic Somali populations of neighboring countries like Ethiopia, Kenya and Djibouti. The ICU is led by Sheikh Hassan Dahir Aweys, a veteran of fighting in the Ogaden region of Ethiopia. Ethiopia and Somalia already went to war in 1977-78 over the Ogaden region, home to a Somali Muslim population of four million. The ethnic Somali Ogaden National Liberation Front (ONLF) is allegedly supplied by Eritrea (The East African, October 23). Sheikh Aweys’ repeated calls in recent days for jihad against the Ethiopian regime have succeeded in inflaming tensions on both sides of the border.

Even as he is criticized for human rights abuses in Darfur, Sudanese President Omar al-Bashir is set on applying his prestige as this year’s chief of the Arab League to bring a successful resolution to Somalia’s Khartoum-based peace talks brokered by the Arab League. Fresh from negotiating a peace deal with eastern Sudan’s resistance movement, the Sudanese regime would like to add a diplomatic success to its efforts to present Sudan as a responsible member of the international community by resolving the conflict in Somalia, an important step in warding off a UN military intervention in Darfur. 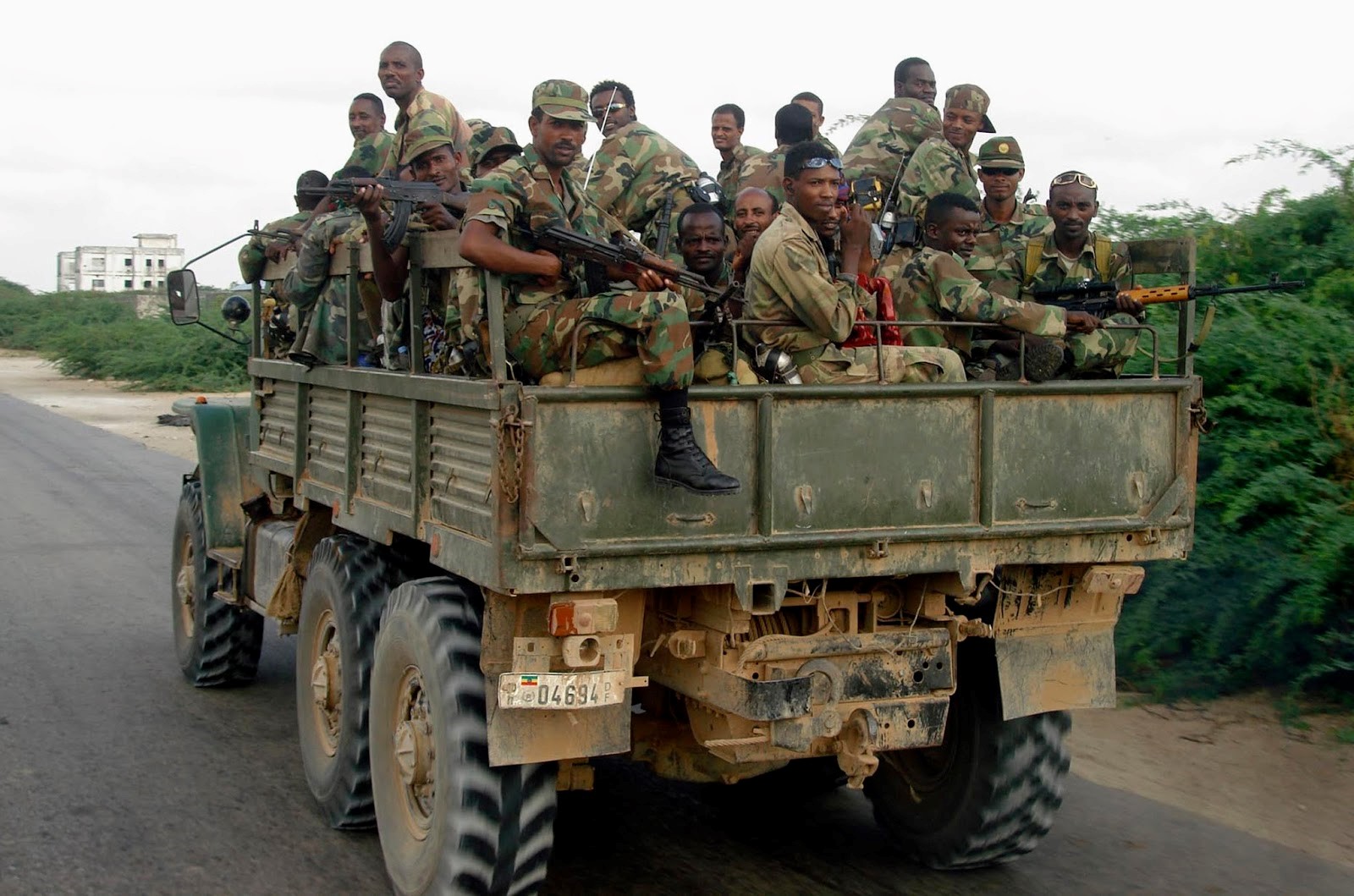 Ethiopia has admitted to sending “several hundred” troops to aid the TFG in Baidoa, although independent reports suggest that the number is as high as 6,000-8,000 troops. Several battalions of Ethiopian troops and tanks have moved up to the Somali border to counter Sheikh Aweys’ calls for jihad. Ethiopia’s Meles Zenawi government has its own problems as it is prosecuting more than 100 opposition members for treason after violent demonstrations following charges of electoral fraud in last year’s Ethiopian elections. Approximately 193 civilians were killed in clashes with security forces. There are also serious ethnic tensions between the Tigrean-dominated government and Amhara and Oromo members of the general staff, leading to questions surrounding army loyalty to the regime in a crisis.

After a bombing campaign blamed on “Eritrean-backed terrorist elements,” Ethiopia is adopting its first law on terrorism and is cooperating with U.S. forces based in Djibouti in an effort to intercept terrorists heading to the Horn (Daily Monitor [Addis Ababa], October 10; Shabelle Media Network, October 12). The Eritrean Ministry of Foreign Affairs issued a bold response to U.S. claims that Eritrea was shipping arms to the ICU. In a statement, the ministry accused the United States of using the charges to cover up the failure of its own policy in Somalia to justify the “disinformation campaign” surrounding terrorism in Somalia and to “create a pretext for the invasion of Somalia by its agent, the regime in Ethiopia” (Shabait.com, October 20). There is considerable bad blood between Ethiopia and Eritrea following a brutal border war in 1998-2000.

The UN reports 1,500 Eritrean troops with armor have assembled on the edge of the UN administered buffer zone with Ethiopia. Ethiopia claims the number of Eritreans massed on the border is closer to 10,000 when local militias are included (SomaliNet, October 25). Some Eritrean units may already be operating within Somalia in support of the ICU. Last week, senior ICU leader Hassan Abdullah Hersi al-Turki (a U.S.-designated al-Qaeda suspect) announced that the ICU was ready to attack Baidoa, Somaliland and Puntland (Horn Afrik Radio, October 24).

There is limited support in northeast Africa for a peacekeeping force in Somalia, whether under African Union or IGAD auspices. Uganda, an opponent of ICU ambitions, is the most enthusiastic advocate of such an intervention, offering 1,000 troops. Ugandan President Yoweri Museveni maintains that Uganda’s main goal would be to train a Somali national army (New Vision [Kampala], October 10). Kenya’s efforts to train Somali TFG security forces have tainted it in the eyes of ICU leaders, although Nairobi has yet to offer any troops to a peacekeeping force. Sudan is expected to provide several thousand troops to the proposed mission, which is still without funding. The ICU violently opposes any talk of foreign peacekeepers in Somalia.

For the moment, all parties are at a standoff. Somalia is incapable of offering any resistance to Ethiopian regulars and armor in the open, where numerous ICU formations would be quickly cut off from each other. Anti-ICU militias such as the rejuvenated Juba Valley Alliance can be expected to go on the offensive against the Islamists, especially if Ethiopia decides to arm anyone ready to fight the ICU. If Ethiopian forces cross the border, the ICU could be expected to fall back on the cities, especially Mogadishu, where their experience in urban warfare would bedevil Ethiopian attempts to secure urban areas. Supplies and possible military assistance to the ICU from Eritrea would drag Ethiopia into a costly and ultimately futile attempt to impose the TFG on an unwilling population. For the Ethiopians, invasion would be easy, yet occupation would remain impossible. With its covert support for ICU forces, Eritrea seems less concerned with stability in Somalia than with keeping Ethiopia off-balance.

U.S. foreign policy is presented with a dilemma; a U.S. intervention in Somalia tends to inspire anti-American sentiment, with few, if any, material successes. Covert support for the failed anti-terrorist coalition of Somali warlords has undone the goodwill built by years of humanitarian assistance. Allowing the Khartoum peace talks to take their course might result in some sort of integration of the ICU into an emerging Somali power structure (a potential blow to Washington’s war on terrorism), while the insertion of an African Union peacekeeping mission in Somalia without the cooperation of the ICU may spark a regional war capable of dragging in a number of neighboring states. Such a conflict will inevitably draw international jihadis operating under independent commands. In a highly underdeveloped region suffering almost continually from environmental disasters, all the ingredients are in place for a full-scale humanitarian catastrophe.

This article was first published in the October 31, 2006 issue of the Jamestown Foundation’s Terrorism Focus