In a surprise move, the Russian Defense Ministry assigned security responsibility for its team of military engineers in Lebanon to two detachments of Chechen troops, despite the outcry from human rights activists who cite the units for incidents of kidnapping, torture and murder. In Lebanon, the Chechens will be operating in a land once ruled by Circassian Mamlukes from the North Caucasus. Neither the United Nations nor Israel was given advance warning of the Chechen deployment. 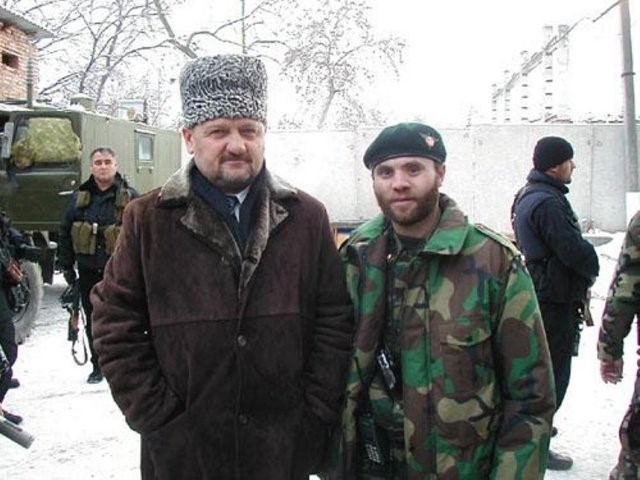 The engineers will build temporary bridges to repair what Russia’s Defense Minister described as Israel’s “barbaric bombing attacks” (Interfax, October 4). Press reports suggest that the idea of sending Russian Muslims as peacekeepers to Lebanon was broached in Moscow by a delegation of Saudi and Lebanese diplomats (Kommersant, October 4)

According to President Putin, the Chechens, as Muslims, will find it easier to “establish contacts with the local population” (Interfax, October 10). Alu Alkhanov, president of Chechnya’s pro-Russian administration, observed: “Importantly, all of these men strictly observe the Muslim rites which will play a role in Lebanon” (Interfax, October 4). Televised footage from Lebanon of Muslim troops of the Russian Army in prayer are a departure for the Russian Army, which has close ties to the Russian Orthodox Church and has historically been a hostile environment for religiously observant Russian Muslims. In announcing that Muslim servicemen would be allowed to pray and observe the Ramadan fast, Lieutenant-General Tsygankov (commander of the Russian task force) did not appear particularly enthused with the changes; “If they are religious to the extent that they need to serve religious ceremonies in a close-to-combat environment, they are free to do so” (Interfax, October 4).

The Russian security detachment consists of two platoons of Chechens, one each from the Zapad (West) and Vostok (East) battalions of the 42nd Motorized Rifle Division, permanently stationed in Chechnya. The East and West battalions of Chechen troops are controlled by Russian military intelligence (GRU) and do not report directly to the Chechen government. The North and South battalions controlled by the Interior Ministry (MVD) are not involved in the operation. The Russian field camp is self-sufficient, with larger security concerns handled by the Lebanese Army. Supplies are brought direct from Russia in Il-76 transport aircraft.

The Russian task force (300 engineers, 54 security men and 1 platoon of bomb disposal sappers) is stationed in the Saida region of Lebanon, near the Mediterranean coast. The Russian group intends to build six temporary bridges north of the Litani River by December. UNIFIL operates only in the region south of the river and north of the border with Israel. The Russian presence exists completely outside of UNIFIL command, based on a separate agreement between Beirut and Moscow. In Israel, Russia is suspected of covert support for Hezbollah.

The Vostok and Zapad Battalions

Despite coming under the same command, the two Chechen units have many differences, reflected in their contrasting commanders. The Zapad Battalion is led by Said-Magomed Kakiev, a career military man who began his association with the GRU as a member of the Soviet Red Army in Karabakh during the dying days of the communist state. Missing an eye and an arm from a grenade blast, Kakiev is now a GRU Major, his loyalty to the Russian Federation displayed in a tunic full of Russia’s highest military decorations. A native of the northwest region of Chechnya, a place with deep historical ties to Russia, Kakiev fought with the pro-Russian Chechen militias against Dudaev’s separatists in the first Chechen-Russian war. Following the war, Kakiev and many of his men were forced to withdraw to Moscow, but rejoined federal troops during the siege of Grozny in 2000. Shortly afterward, Kakiev’s pro-Russian militia was in the front line during the encirclement and eventual slaughter of Ruslan Gelaev’s column at Komsomolskoye. 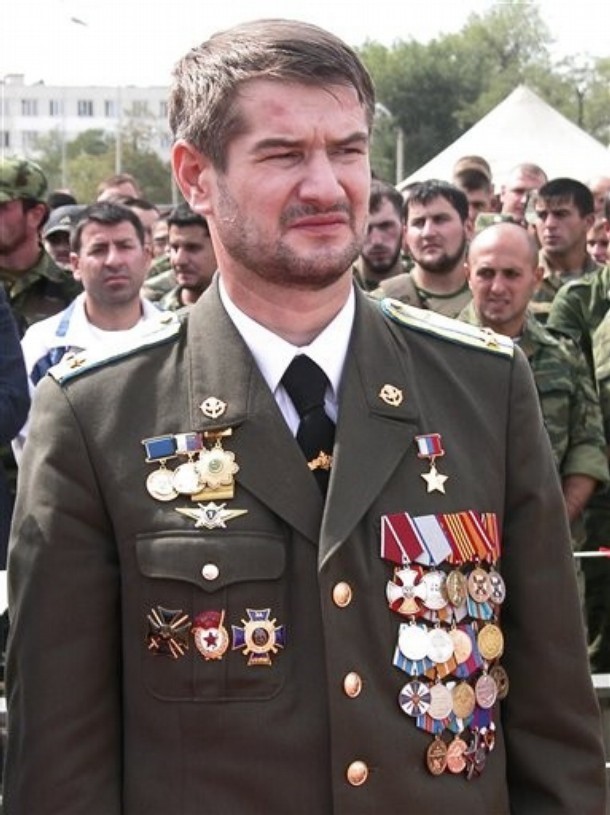 All of Zapad’s men are drawn from the northwest region of Chechnya, where Sufism prevails and the alleged “Wahhabism” of the resistance is strongly condemned. Unlike Vostok and the MVD units, Zapad maintains its reputation for tight security by refusing to accept amnestied former members of the resistance under any circumstance. Kakiev’s battalion appears to have already been entrusted with covert operations in the neighboring republics of the Russian North Caucasus and even in the mountainous border regions of Georgia (Moskovsky komsomolets, April 6)

The dependable Kakiev’s counterpart as commander of the Vostok battalion is long-time warlord Sulim Yamadaev, an ex-rebel and notorious kidnapper who sees the Vostok formation as existing mainly to serve the interests of the powerful Yamadaev family. A one-time ally of Ramzan Kadyrov, Yamadaev is now a bitter opponent of the prime minister. Sulim’s brother Ruslan is a State Duma deputy representing the pro-Putin United Russia party in Chechnya. An explosion in 2003, blamed on either the resistance or the Kadyrovs, killed another brother, military commander Dzhabrail Yamadaev.

Though allegiances are fluid in Chechnya, both GRU units generally support Chechen President Alu Alkhanov in his disputes with Prime Minister Ramzan Kadyrov. Disputes between Yamadaev’s group and Ramzan Kadyrov’s men are common and frequently violent. Kakiev’s men regard Yamadaev’s group as thoroughly penetrated by double agents and sympathizers with the resistance.

Vostok has developed a reputation for indiscipline and brutality. In June 2005, members of the battalion broke away from a planned operation to undertake a revenge raid on civilians in the ethnic Avar village of Borozdinovskaya. The village was founded in the 1950s by Avar emigrants from neighboring Dagestan and used to maintain its own militia to protect it from predatory Chechen gangs, including one led by Sulim Yamadaev (Moscow Times, June 23). The raid left one dead and eleven still missing after their detention. Most of the village’s 1,000 residents fled to Dagestan and could only be persuaded to return with great difficulty. President Putin’s representative in the North Caucasus, Dmitry Kozak, denounced the operation as “direct sabotage” against Russia (RIA Novosti, June 24, 2005). An investigation resulted in a Vostok officer receiving a three-year suspended sentence.

On September 15, Vostok members made a surprise appearance in St. Petersburg to intervene in a real estate dispute between two Chechens. The dispute revolved around a meat-packing plant owner who refused to sell his land to another Chechen who was assembling real estate for a housing development worth $1 billion. The plant’s offices were occupied in a military style operation and the reluctant seller was allegedly beaten. He resigned the following day (Kommersant, September 19; Chechnya Weekly, September 21). The meat plant raid clearly showed that the Vostok battalion was in need of work, since it apparently had enough time to become involved in property disputes in St. Petersburg. The apparently independent movement of a unit of 20-40 armed Chechens to St. Petersburg was an embarrassing reminder of the undetected arrival of Movsar Barayev’s Chechen terrorist group in Moscow four years ago. Defense Minister Sergei Ivanov noted that the Chechen deployment to Lebanon was “a reasonable step because as of recently, these servicemen do not have much work to do in the territory of Chechnya” (Itar-Tass, October 4).

The Israeli government has said nothing publicly about the Chechen mission, but there is no doubt some alarm in security circles regarding the fact that the Russian security force is composed of military intelligence elements operating without UN supervision. Israel’s Prime Minister Ehud Olmert was recently in Moscow seeking guarantees that Russian arms to Syria would stop ending up in Hezbollah hands. Russia’s privately negotiated peace mission to Lebanon continues a Russian Federation tradition of unilateral operations, as seen in Kosovo and post-Taliban Afghanistan.

The Chechen stay in Lebanon is likely to be a quiet one. On their best behavior, these selected representatives of Zapad and Vostok are unlikely to meet any opposition to their bridge-building mission. With the Chechen war in a low-intensity phase, the Kremlin has found a useful task for its restless Chechen militias, presenting Russia’s Muslim face to the Middle East as part of a wide-ranging initiative to improve relations in the region. The Chechen deployment is also intended as a public demonstration of Chechen loyalty to the Federation; as pro-Russian Chechen Premier Ramzan Kadyrov put it, “Serving the Russian flag and enjoying the trust of their fellow citizens, what can be more important than that?” (Itar-Tass, October 4).

This article originally appeared in the October 26, 2006 issue of Chechnya Weekly.