A Salafist view of the Libyan revolt has been offered in two interviews with a noted militant ideologist and contributor to prominent jihadi forums who uses the pseudonym of Shaykh Hussein bin Mahmud (Dar al-Murabiteen Publications, February 22; February 25).

Shaykh Hussein describes the Libyan insurrection against Mu’ammar al-Qaddafi’s regime as a jihad, saying its aim is to “oust this idiot in order to spare the blood of Muslims and save their dignity.” The shaykh claims that jihad in Libya is now an obligatory duty (fard ‘ayn) for every capable person in Libya as well as Muslims in the neighboring countries of Egypt, Algeria, Chad, Sudan and Niger. 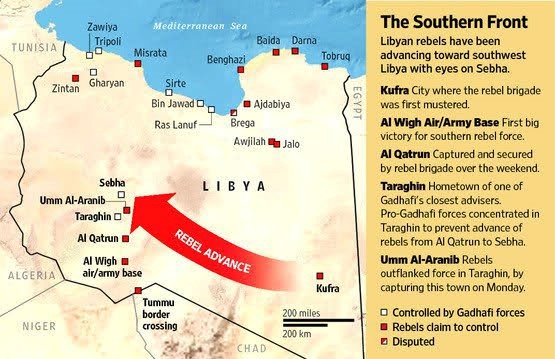 As well as moving on Sirte and Tarablus (Tripoli), the shaykh urges the rebels to move on the southern desert city of Sabha, a Qaddafi stronghold and a strategic point connecting coastal Libya with the African interior. To succeed in Libya, Shaykh Hussein suggests the rebels take control of all government institutions and media outlets, capture and sentence to death Qaddafi’s sons, form a transitional committee from tribal leaders, scholars and military officers and avoid trusting the West or the rulers of other Arab countries. As for Qaddafi, “I wish they slaughter him in the largest ground of Tripoli publicly in front of the cameras.” 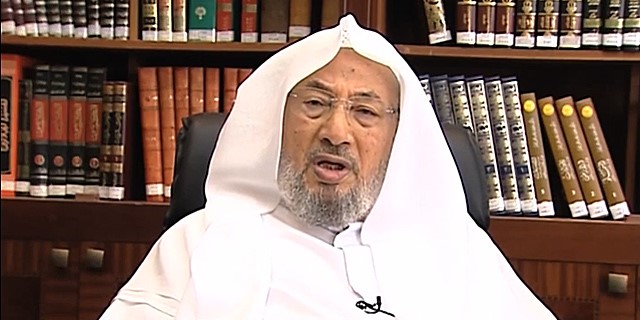 Asked about a fatwa issued by Qatar-based Muslim Brother and TV preacher Yusuf al-Qaradawi that permitted Libyans to kill Qaddafi, Shaykh Hussein mocked the influential cleric’s ruling: “I heard the statement of Qaradawi. A few years back, he used to visit [Qaddafi] and smile in his face and now he is giving the fatwa to kill him! He visits many Arab rulers and sits with them and praises them! And we say to him: What if the people of all the [Arab] nations go out against the rulers, will you give fatwa to kill them?”

The shaykh notes that the reputations of Tunisia’s Zine al-Abidine Ben Ali, Egypt’s Hosni Mubarak and Libya’s Mu’ammar al-Qaddafi have been destroyed in recent months, revealing their true nature as apostates, infidels and blood-spillers. Shaykh Hussein, however, sees the inspiration of Osama bin Laden behind the revolts in the Arab world: “Wasn’t Shaykh Osama saying all this for almost three decades and he was thrown out as a Kharijite [i.e. a heretic] and a takfiri and hypocrite? What is the difference? He incited the people to go out and the people have gone out! What is the difference?” The shaykh maintains that only violent resistance can complete the revolution: “The youth did not die for Hosni to go and his party to stay…”

Shaykh Hussein points out that Libya’s unconventional government structure (the Jamahiriya) has created a problem for the West in trying to identify an appropriate candidate to rule Libya “according to their desires.” Whereas in Egypt and Tunisia the ruler was removed and the government stabilized, there is no government in Libya outside of Qaddafi. In Egypt and Tunisia, this process has resulted in rule now being back in the hands of the former government.

In his second message, Shaykh Hussein elaborated on the theme of Jewish/Israeli support for Qaddafi’s regime, specifically identifying the Israeli security firm Global CST as the contractor responsible for supplying mercenaries to the regime. Now it has become clear that the mercenaries “are working for the Jewish government, so these people should be killed and tortured the severest of tortures in accordance with the sayings of Allah Almighty.”

Shaykh Hussein refers here to unverified reports carried in the Iranian and Arab press that Israeli security firm Global CST received approval from the head of Israeli intelligence and Defense Minister Ehud Barak to provide Qaddafi with 50,000 African mercenaries. The reports allege the Libyan side of the contract was handled by Abdullah al-Sanusi, Libya’s intelligence chief and brother-in-law of Qaddafi (Press TV, March 2). Global CST, or Global Group, was founded in 2005 by Major General Israel Ziv and carries out “security and commercial large-scale projects” in South America, Africa and Eastern Europe, according to its website. No evidence has been provided to support the allegations.

Since the rebellion in Libya began, Qaddafi has asserted al-Qaeda was behind the violent unrest, a claim Shaykh Hussein says is designed to force the rebels to denounce Bin Laden and al-Qaeda, thus ending their hope for Islamic rule in Libya. The al-Qaeda ideologist condemned a double standard that discourages al-Qaeda fighters from entering the fray in Libya: “It is permitted for [Qaddafi] to bring his disbelieving Africans to kill Muslims, and it is prohibited for the Muslims to come with the mujahideen to help them!”