An al-Qaeda media front has released a statement from a senior member of the core command regarding the goals of the Libyan revolt. Shaykh Jamal Ibrahim Ishtawi al-Misrata (a.k.a. Atiyyatullah) delivered a sharp critique of Mu’ammar al-Qaddafi in the ten minute, 44 second videotape featuring audio and a still photo of the Libyan native of Misrata (Global Islamic Media Front, March 26). [1] 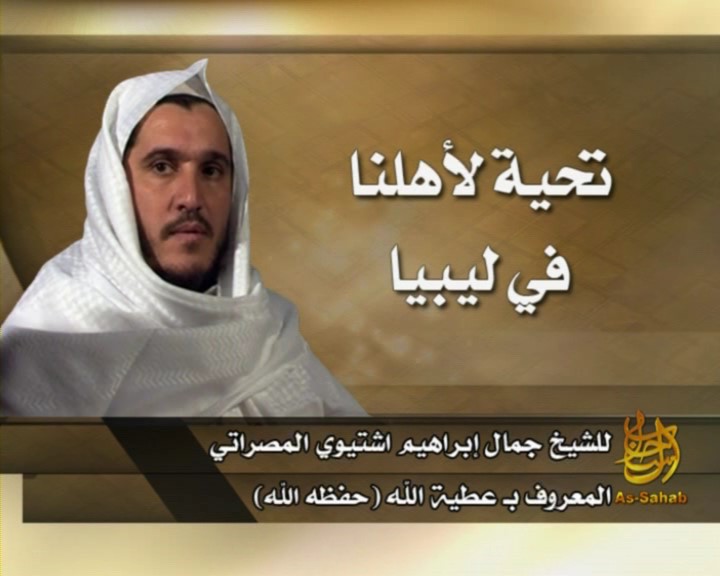 Al-Misrata begins his message with a dose of anti-Qaddafi invective, calling the Libyan leader a taghut (one who rules without recourse to Islamic law), an “ignoble hallucinator who has embarrassed us in front of the whole world,” a “pharaonic lunatic” and a “scumbag [who] has ruined the image of Libya and its people.”

The Libyan al-Qaeda member addresses his “Muslim brothers in Libya” in a series of six messages:

• Al-Misrata begins by acknowledging the failure of Libyans to stand up earlier to the Qaddafi regime and views the youth revolution in Libya as “a means of forgiveness for all or at least some of our neglect, our remaining silent, our desertion and failure and acceptance of humiliation and degradation… [and] the participation of some in Qaddafi’s detestable regime.” Al-Misrata suggests repentance to Allah as the means of wiping away these “errors, transgressions and deadly sins.”

• Al-Misrata predicts the post-Qaddafi era will inevitably be a time when Islam comes to dominate Libya. He hopes that people will realize this and work toward it, as Islam is “making a comeback… whether people like it or not.” For this reason, al-Misrata calls for the implementation of a new Islamic constitution for Libya that will have Shari’a as the sole source of legislation.

• If any new Libyan state is unable to immediately welcome the “mujahid vanguard” due to political considerations, it should at least avoid harming the mujahideen in any way or allying itself against them with the “enemies of Allah.”

• The people of Libya must maintain their unity and brotherhood. Uniting in Islam is the best way to do this.

• Al-Misrata calls on Libyans to keep forgiveness and tolerance in the forefront of their dealings with former regime members, with the exception of the “cronies and aides of Qaddafi” and those who committed “the most grotesque forms of crime” against Islam.

• The al-Qaeda leader concludes with a warning to “the enemies of Allah, whether America or others” to desist from “acts of aggression or interference” with Libya; otherwise they will face the wrath of the “Army of Allah.”

1. For the video, see youtube.com/watch?v=jkaNL2ZVg6g.