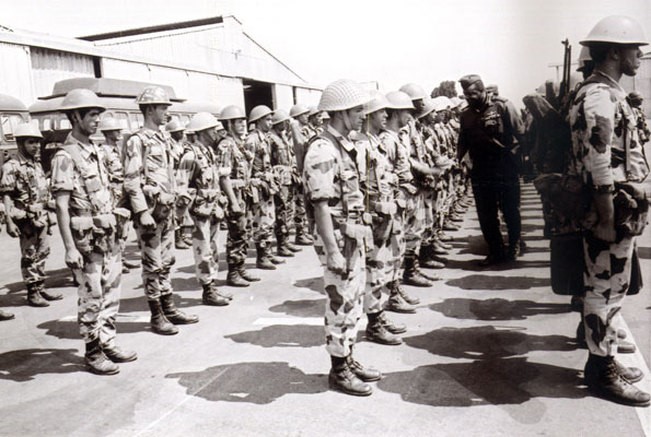 Libyan Troops being Reviewed by Idi Amin in Kampala, 1979

Qaddafi’s most controversial involvement with Uganda came in 1979, when he sent 2,500 Libyan troops together with armor, rockets, artillery and air cover to support Ugandan dictator Idi Amin from an invasion by Ugandan dissidents supported by Tanzanian regulars. Only a year after Major General Idi Amin seized power in Uganda, Qaddafi had managed to persuade him to abandon his Israeli patrons in return for substantial cash donations and investment. The deployment was a military disaster. Far from saving Amin, the arrival of the Libyan troops was interpreted by Amin’s defenders (many of whom were Sudanese) as an opportunity to flee Kampala with looted goods as the Libyans provided cover against the encroaching anti-Amin forces. Many of the Libyans appear to have been told they were going to southern Libya for military exercises. Confusion reigned and the Libyan forces were shattered. Casualties were heavy as the survivors were taken prisoner by the invaders. There were many reports of captured prisoners being executed while some luckier Libyan troops were eventually repatriated to Libya, where Idi Amin also sought refuge before moving on to permanent exile in Saudi Arabia.

Despite this military humiliation, Qaddafi continued to seek influence in Ugandan affairs, an agenda that was assisted by a 1981 encounter with future Ugandan president Yoweri Museveni,  at that point still a guerrilla leader opposing the Ugandan government of Milton Obote (possibly an even worse leader than Idi Amin). Museveni had also fought with the Ugandan dissidents against Libyan troops in Kampala in 1979, though this did not initially pose a problem in the relationship between the two men. Qaddafi began supplying Museveni’s National Resistance Army (NRA) with supplies of badly needed arms and munitions, enabling Museveni’s triumph in 1986. 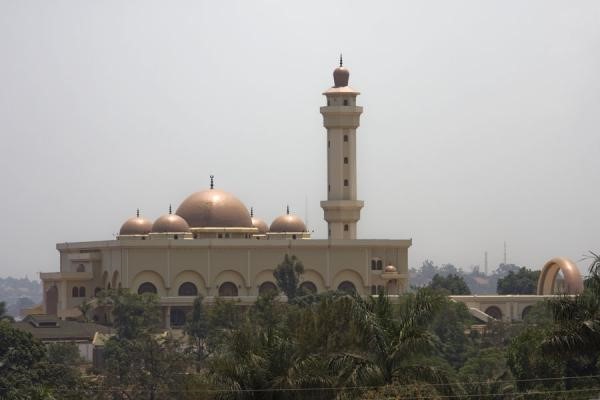 The skyline of Kampala is dominated by the massive Qaddafi National Mosque, an elaborate building funded by the Libyan leader, who incensed Uganda’s Christian majority at the 2008 opening by claiming the Bible was a forgery and inviting Ugandan Christians to visit Mecca.  Qaddafi was also scheduled on the same trip to unveil a plaque near the Tanzanian border honoring the Libyan soldiers who intervened on Amin’s side in 1979. However, the event was cancelled and Qaddafi made a hasty return to Tripoli after a prominent Ugandan Muslim, Shaykh Obeid Kamulegeya, allegedly informed Qaddafi that Museveni’s faction of fighters had been responsible for the slaughter of captured Libyan troops at a Roman Catholic convent outside of Kampala (Uganda Record, December 21, 2010). A year later there were reports that Ugandan intelligence had discovered Libya had sent funds to support anti-Museveni riots in September 2009 (Kampala FM, September 20, 2009).

Some light on Museveni’s views of Qaddafi was shed by U.S. embassy cables exposed by Wikileaks. In 2007, Museveni complained to Africa Bureau Assistant Secretary Jendayi Frazer that Qaddafi was using bribery and intimidation to persuade West African states to sign on to a union of African states under Qaddafi’s leadership (cable of September 14, 2007, carried by the Guardian, December 7, 2010). Frazer again met with Museveni several months after Qaddafi’s abrupt departure from Uganda. While the Ugandan leader continued to be critical of Qaddafi’s efforts to create a “United States of Africa,” Museveni now confided he was afraid Qaddafi would try to kill him by attacking his plane in international airspace (cable of June 18, 2008, carried by the Guardian, December 7, 2010).

Given Libya’s lengthy and complicated relationship with Uganda, President Museveni penned an open letter on his views of the relationship published by Ugandan dailies (New Vision, March 22). Museveni began by listing a series of “mistakes” by the Libyan leader. These included:

• Backing Idi Amin under the mistaken assessment that Uganda was a “Muslim country” where Amin and other Muslims were oppressed by Christians.

• Qaddafi’s insistence on creating a “United States of Africa” under his own leadership.

• Proclaiming himself an African “King of Kings” by bypassing legitimate African political leaders to appeal directly to traditional African leaders such as local kings or chiefs, most of whom now perform only ceremonial roles in Africa.

• Failing to distance himself from terrorism and the use of indiscriminate violence.

Nevertheless, Museveni also listed a number of qualities possessed by the Libyan leader while describing the importance of Qaddafi’s provision of arms to Museveni’s fighters in 1981: “Qaddafi, whatever his faults, is a true nationalist. I prefer nationalists to puppets of foreign interests.” Describing the Libyan leader as a “moderate,” Museveni pointed to the development of Libya during Qaddafi’s time in power, his advocacy of women’s rights and his opposition to “Islamic fundamentalism.”

The Ugandan president also had harsh words for the Libyan rebel movement: “Regarding the Libyan opposition, I would feel embarrassed to be backed by Western war planes. Quislings of foreign interests have never helped Africa… If the Libyan opposition groups are patriots, they should fight their war by themselves… After all, they easily captured so much equipment from the Libyan Army, [so] why do they need foreign military support? I had only 27 rifles [when Museveni started his campaign to liberate Uganda].”

This article first appeared in the March 31, 2011 issue of the Jamestown Foundation’s Terrorism Monitor.