Just as the days of cooperation between the three Islamist groups that seized control of northern Mali last year seemed to be over, the three groups appear to have mounted a joint push southwards towards Malian Army lines near Mopti and Sévaré. The move may be intended to present a united front before peace talks resume in Ouagadougou on January 19, though the exact composition of the force remains uncertain. The advance may also offer an opportunity to test the resolve of the Malian Army and its allied militias, which have been talking tough but showing little sign of mounting an offensive against the Islamists any time soon. 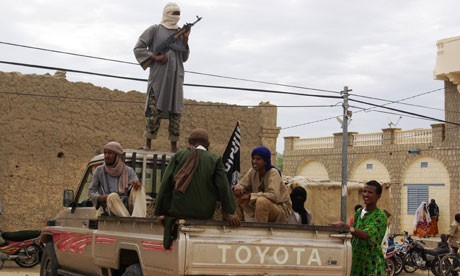 In the last few weeks, a combination of internal racial and religious tensions between the Islamist groups has been exacerbated by a perceived need to reconfigure alliances in the region to prepare for an inevitable external military intervention. The largely Tuareg Ansar al-Din movement commanded by Iyad ag Ghali (a.k.a. Abu al-Fadl) also appears to be making efforts to consolidate a leading role amongst the militant groups. Important changes are afoot in the command structure of the other Islamist groups in northern Mali which have, until now, been dominated by Mauritanian and Algerian Arab commanders.

In an interview with an Algerian newspaper, Shaykh Awisa, a leading member of Ansar al-Din’s military command, referred to the movement’s shift away from an alliance with the largely Black African Islamists of MUJWA (Movement for Jihad and Unity in West Africa) in favor of closer ties to its former partner, the Tuareg nationalist MNLA: “Our relations with the MNLA are very good. We have a common enemy [i.e. MUJWA]. There are no problems between our movement, Ansar al Din, and the MNLA” (Le Temps d’Algérie, November 27, 2012). The MNLA fought a fierce battle with MUJWA on November 16, 2012.

MUJWA has identified a replacement for Hisham Bilal, believed to have been the first sub-Saharan individual to command an al-Qaeda-associated jihadist combat unit. Bilal and a number of his men returned to his native Niger and surrendered to authorities there on November 8, 2012, complaining that the Arab commanders of MUJWA viewed Black African jihadists as “cannon fodder” and believed “a black man is inferior to an Arab or a white” (AFP, November 9, 2012). Bilal’s successor is a Beninese national using the nom de guerre “Abdullah.” The new commander is reported to speak Yoruba, a major language in Nigeria as well as Benin, and may have been responsible for contacts between MUJWA and northern Nigeria’s Boko Haram movement (Radio France Internationale, December 31, 2012).  According to one report, MNLA leader Bilal ag Acherif was in the Nigerian capital of Abuja in mid-December, trying to convince authorities there that his movement could, with Nigerian arms and logistical support, provide a bulwark against the expansion of Boko Haram (Jeune Afrique, December 16, 2012).

MUJWA speaks of itself as an alliance between native Arab, Tuareg and Black African tribes and various muhajirin (“Immigrants,” i.e. foreign jihadists) from North and West Africa. According to MUJWA, their “war” against the MNLA was sparked not only by the Tuareg nationalists’ refusal to adopt Shari’a as the law of the land, but also by their racial attitudes, suggesting that in the MNLA, “the Black has no rights, while the White has rights” (in Malian usage, “white” is applied to Tuareg, Arabs and Mauritanians). [1] To further its official position on race relations, MUJWA cites a familiar hadith (saying of the Prophet Muhammad) recorded by Imam Ahmad ibn Hanbal (780-855 C.E.): “An Arab has no superiority over a non-Arab, nor does a non-Arab have any superiority over an Arab; also a white has no superiority over a black, nor does a black have any superiority over a white except by piety” (Musnad Ahmad 22391).

On January 2, MUJWA’s Salah al-Din Brigade announced it had decided to leave MUJWA and join Iyad ag Ghali’s Ansar al-Din movement. The decision by Brigade leader Sultan Ould Badi (a.k.a. Abu Ali) to swear allegiance to Ag Ghali apparently came after lengthy efforts by Ansar al-Din leaders to unify the Islamists. Most of the fighters in the Salah al-Din Brigade are reported to hail from Gao and Kidal (Sahara Media, January 2).

A leading member of the MNLA and its provisional Azawad government denied rumors of dissent within his movement while warning at the same time that any member of Ansar al-Din who allies himself with MUJWA will be treated as a MUJWA fighter (Le Temps d’Algérie, December 10, 2012). At the moment there are no hostilities between the MNLA and Ansar al-Din, both primarily Tuareg rebel movements who have been engaged in joint peace talks being held in Ougadougou and Algiers despite their conflicting goals. However, on January 3, Ansar al-Din leader Iyad ag Ghali announced that his movement would no longer abide by its offer to end hostilities with the Bamako government due to the latter’s failure to bring anything of substance to negotiations in Ougadougou and its decision to recruit mercenaries from Liberia, Sierra Leone and Côte d’Ivoire to fight in northern Mali (Sahara Media [Nouakchott], January 3; AFP, January 3).

Within al-Qaeda in the Islamic Maghreb (AQIM), a Mauritanian, Muhammad al-Amin Ould al-Hassan Ould al-Hadrami (a.k.a. Abdallah al-Shinqiti), is reported to have been appointed the new amir of the Furqan Battalion to replace Yahya Abu al-Hammam, who took over as amir of AQIM’s Sahara command (see Terrorism Monitor Brief, October 18, 2012). Al-Shinqiti finished a degree from Nouackcohott’s Higher Institute for Islamic Studies and Research in 2006 while serving a 14-month prison term before joining AQIM (Sahara Media [Nouakchott], December 31, 2012). AQIM’s penchant for cigarette and drug smuggling has created friction with Ansar al-Din, which has vowed to eliminate the trade in areas under its control (Le Temps d’Algérie, November 29).

In order to broaden its base, Ansar al-Din now appears to be abandoning its strict adherence to the non-native Salafism that brought the movement into conflict with many residents of northern Mali. In negotiations being held in Burkina Faso, Ansar al-Din has backed away from its insistence that Shari’a be applied throughout Mali rather than just northern Mali (Azawad). Movement leaders such as Iyad ag Ghali and Algabass ag Intalla have been meeting with local religious leaders and tribal chiefs to assure them Ansar al-Din does not intend to interfere with the traditional form of Islam practiced in the region (Jeune Afrique, December 21). By doing so, the movement hopes to marginalize the foreign Salafists commanding AQIM. If Ansar al-Din is to have any success in the ongoing negotiations with Bamako it must be able to demonstrate some degree of popular support and thus cannot afford to continue alienating local Muslims. Such moves also help bring Ansar al-Din closer to the MNLA, which rejects the introduction of Islamist extremism into the region.

Meanwhile, Mokhtar Belmokhtar (a.k.a. Khalid Abu al-Abbas), who split from AQIM after a dispute with the movement’s leadership in November, is reported to have relocated with a detachment of loyalists and MUJWA fighters equipped with dozens of vehicles armed with heavy machine-guns to al-Khalil, an important transit point for smugglers and legitimate traders alike near the Algerian border (Le Temps d’Algérie, December 26, 2012; for Belmokhtar’s split, see Terrorism Monitor Brief, November 15; November 30). The occupation of al-Khalil gives Belmokhtar an opportunity to control fuel smuggling in the region as well as shipments of food and other goods to northern Mali. [2]

While northern Mali was once neatly divided between the three armed Islamist groups in the region, Ansar al-Din has now moved its forces out of Kidal into Timbuktu and Gao regions, once the preserves of AQIM and MUJWa, respectively. AQIM appears to have responded to this move by creating a new brigade to operate in Kidal, the Katibat Yusuf bin Tachfine, led by a Kidal Tuareg named Abu Abd al-Hamid al-Kidali (Le Temps d’Algérie, December 3, 2012). In the current environment of mistrust in northern Mali, a joint operation may be the only way of preventing an outbreak of clashes between the sometimes cooperative, sometimes antagonistic Islamist movements operating in the region.

2. For al-Khalil, see Judith Scheele, Smugglers and Saints of the Sahara: Regional Connectivity in the Twentieth Century, Cambridge, 2012.

This article first appeared in the January 11, 2013 issue of the Jamestown Foundation Terrorism Monitor.