The split between Somalia’s al-Shabaab militant group and the Islamists who have joined the new Somali government continues to deepen, as demonstrated by the fifth issue of al-Shabaab’s Millat Ibrahim magazine, which appeared on various jihadi websites on March 4. The issue contains a number of articles critical of former Islamic Courts Union Chairman Shaykh Sharif Shaykh Ahmad, the new President of Somalia. 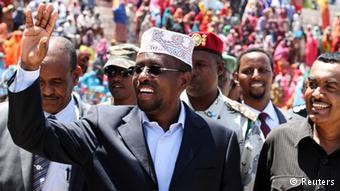 An article by Abu Talha al-Somali makes its view of the “apostate” nature of the new president clear in its title; “Apostate Sharif Is President of the Apostate Government in Replacement of the Apostate [Abdullahi] Yusuf.” Unflattering comparisons are made in “Those Similar to Sharif throughout Islamic History.”

The deepest analysis of the direction of the new government was provided in an article entitled “Message” by Abu al-Hashir al-Salafi al-Sudani, which examined the implications of the appointment of Shaykh Sharif Shaykh Ahmad as president. The author described the challenges al-Shabaab would face from the following aims of this “puppet president”:

1/ Undermining al-Shabaab through the implementation of Shari’a as the legal code of Somalia, which will also decrease the possibility Shaykh Sharif will be considered a tyrant or apostate

2/ The appointment of Shaykh Sharif as leader and the withdrawal of the Ethiopian invaders will remove the raison d’etre of al-Shabaab.

3/ The elimination of piracy on the Somali coasts, which al-Sudani notes will remove a threat which has caused “excessive losses” to the Crusaders     and their apostate supporters.

4/ The forthcoming popular elections will entrench the new government. Al-Sudani argues that they will instead return the rule of tyrants:  “Islamic Shari’a is not established by innovative elections that recognize the false multi-party system with all its forms and colors. The religion is only established by a victorious sword and a guiding book.”

Shaykh Sharif also comes under severe criticism for fleeing Somalia when the Ethiopians invaded in December 2006 and is accused of negotiating with the “enemies” and receiving their financial support during his absence from the battlefield.

A number of other topics are examined in Millat Ibrahim. A “Message to Gaza” calls on Palestinians to use Somalia as a base for the liberation of Jerusalem. Other articles describe the gentle behavior of a mujahid and provide an analysis of the reasons behind the withdrawal of the Ethiopian military from Somalia. There is also a transcript of a February speech on Somalia by al-Qaeda strategist Abu Yahya al-Libi (the organization’s point-man on Somali issues) and a selection of quotations on jihad by the “martyr Abu Musab al-Zarqawi,” the late leader of al-Qaeda in Iraq.

This article first appeared in the April 3, 2009 issue of the Jamestown Foundation’s Terrorism Monitor