Despite an eagerness to use the South African National Defense Force (SANDF) as an means of projecting the nation’s influence abroad, there is evidence that South Africa’s government has so neglected or mismanaged its military assets that it may soon be unable to defend itself, much less engage in international adventures. 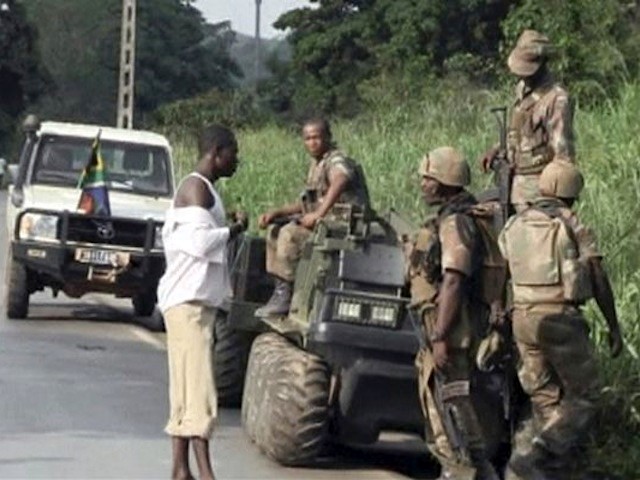 Laat year, Roelf Meyer, the chairman of South Africa’s defense review committee, identified a number of strategic goals for the SANDF, including:

However, with a reduced force size and inadequate resources, the SANDF will soon have difficulty meeting most of these goals. The SANDF is already estimated to be three battalions short of what it requires to meet current commitments (Johannesburg Star, January 9).  Defense spending is now 1.2 % of GDP, shy of the IMF’s recommended 2%, and there are no plans to increase it.

Considering the current restraints on SANDF, the president’s decision to deploy a reinforced paratroop company of some 400 men to the Central African Republic (CAR) earlier this month took many by surprise, not least because of the president’s failure to inform parliament of the deployment and the costs involved as he is required to do by the South African constitution (Johannesburg Star, January 8; for the intervention in the CAR, see Terrorism Monitor Brief, January 10). The South African force was chartered into the CAR due to a lack of operable transport aircraft.

Prior to the CAR deployment, SANDF already had nearly 2,000 personnel active on peacekeeping and training missions in Darfur, the CAR and the Democratic Republic of the Congo (DRC). Some 1,200 South African troops were amongst the 1,500 man UN peacekeeping force (the Mission de l’Organisation des Nations Unies en République Démocratique du Congo – MONUSCO)  that was heavily criticized in November for allowing a few hundred rebels to take the Congolese city of Goma with little fighting (See Terrorism Monitor, November 30, 2012). With a total strength of over 19,000 and a budget of over $1.4 billion annually, MONUSCO is the largest and most expensive peacekeeping force in the world (Daily Monitor [Kampala], December 29, 2012).

Life in the South African military is not seen as desirable by many potential recruits. Pay can be erratic, HIV rates are as high as 25% (making these troops unavailable for external deployment) and an estimated 35% of South Africa’s military barracks have been classed as unfit for human occupation since 2007 (Mail & Guardian [Johannesburg], April 21, 2012).  Without money to operate sophisticated equipment, skilled staff continue to flee at the end of their enlistment and there is little opportunity for new recruits to train in skills useful in the civilian world. Parliament’s Joint Standing Committee on Defense has described abuse of women in the SANDF as “common,” adding that many female recruits have been impregnated by their instructors (BUAnews, November 26, 2011). Racial abuse of black subordinates by white senior officers also remains a problem 19 years into the integration process (Mail & Guardian [Johannesburg], August 21, 2011). South African troops are unionized and have at times clashed with police during pay disputes.

With the 2012 defense budget of $3.8 billion still far below the 2% of GDP required to maintain the armed forces, the South African defense department began looking at ways of generating income, including contracting out soldiers to municipalities to do various labor and infrastructure repair projects. The department also created the Defense Estate Management agency to lease or sell-off defense department lands. Much of the land owned by the SANDF came by way of British government endowments of military facilities made on the condition that they could only be used for defense purposes (Mail & Guardian [Johannesburg], April 21, 2012).

There has also been a temptation to use the military as a well-armed police force to suppress labor unrest and gang activity. Considerable controversy was generated last year when President Jacob Zuma deployed 1000 SANDF troops to aid police in disarming striking Lonmin miners following a massacre by police (Johannesburg Times, September 21, 2012; SAPA, September 16).  Western Cape premier Helen Zille issued a request for troops to fight “emergency levels” of gang violence in Cape Town in July (AFP, July 10, 2012).  By late November, there were calls for the army to be sent to rural areas of the Western Cape to prevent violence by striking farmworkers (SAPA, November 28, 2012).

Sending the SANDF into the streets of South Africa damaged President Zuma’s credibility as the South African Development Community (SADC) facilitator in neighboring Zimbabwe, where he has urged that Zimbabwean troops be confined to barracks. According to the state-run Daily Mail, if South African presidential spokesman Mac Maharaj “thinks he will be able to still come here and continue mindlessly preaching about keeping the army in the barracks as part of President Zuma’s mediation, then he does not take himself seriously” (New Zimbabwe, September 24, 2012).

Politicization of the military is still a problem in South Africa. There has been speculation that the current chief of the SANDF, Angolan-trained Lieutenant General Solly Zacharia Shoke, received his appointment as a result of his history as a commander in Umkhonto we Sizwe, the ANC’s military wing (SAPA, May 11, 2011). Umkhonto we Sizwe forces were integrated into the newly formed SANDF between 1994 and 2004. An investigative commission recently declared that the SANDF was too politicized, a situation typified by former Defense Minister Lindiwe Sisulu’s preference for wearing SANDF uniforms at public occasions (SAPA, April 28, 2011).

A sometimes unaccountable procurement process remains a problem for the South African military; last year the political opposition revealed over $7.75 billion had passed through a defense department slush fund that had failed to reveal to parliament how the money had been spent (Johannesburg Times, April 18, 2012). The army has been overlooked in recent acquisition programs and is close to finding itself equipped with obsolete equipment in terms of armored personnel carriers, logistics vehicles and main battle tanks (Financial Mail [Johannesburg], October 21, 2012).

During the years of sanctions, South Africa developed a competitive and innovative defense industry. Since then a somewhat diminished defense industry has survived domestic cutbacks by turning to the export trade. Now, however, once innovative designs are becoming dated while research and development funding is drying up, threatening a once profitable industry that was a reliable employer of skilled labor (Financial Mail [Johannesburg], October 21, 2012).

South Africa’s once-effective air force has new aircraft but cannot afford the fuel and maintenance needed to keep them in the air. Despite this, one element of the air force that did see extensive time in the air was Squadron 21, charged with flying South African VIPs and government ministers. Former defense minister Lindiwe Sisilu booked 203 flights over three years in chartered luxury Gulfstream jets at an estimated cost of $4.5 million. Some 63 of the flights were empty, as they were intended solely to pick the minister up somewhere and take her to another destination in what one opposition critic described as “a staggering waste of money” (Mail & Guardian [Johannesburg], November 9, 2012).

In 2012, President Zuma decided the Boeing Business Jet purchased by his predecessor, Thabo Mbeki, for $66 million in 2001, was no longer good enough for presidential travel. Controversy erupted when it was learned the defense department had been instructed to purchase two Boeing 767s for Zuma’s exclusive use, two Boeing 737s for the exclusive use of his deputy, Kgalema Motlanthe and two smaller business jets for former presidents and government ministers. Following the predictable uproar, the SANDF leased two executive jets from a Nigerian charter company at a cost of $88 million over five years (Mail & Guardian [Johannesburg], April 8, 2012; Johannesburg Star, October 19).

While government ministers travel in luxury, the South African Air Force (SAAF) still transports troops in 70-year-old Dakota aircraft. One of these, a Dakota C47TP (an upgraded DC-3 with turbine engines) crashed last December, claiming 11 lives when it was unable to fly above inclement weather. The crash came shortly after the military decided it could no longer afford a maintenance contract for its military aircraft (SAPA, December 6, 2012; Sunday Times [Johannesburg], December 10, 2012). World War II-era Dakotas also continue to be used for surveillance of South Africa’s 3,900 kilometer coastline in the absence of modern surveillance aircraft (Sunday Times [Johannesburg], April 18, 2012). Meanwhile, 26 new Swedish-built Gripen fighter-jets, purchased at a cost of R10 billion, average only two hours in the air each week; not enough to keep the machines in operable condition and far from the 10 hours of flight-time each week considered necessary to keep pilots well-trained (Sunday Times [Johannesburg], December 10, 2012).

Former SAAF chief Lieutenant General Carlo Gagiano retired in 2012 after trying to resign in late 2011 during his hospitalization for stress as he continued to try unsuccessfully to find enough money for the fuel and maintenance to keep the SAAF in the air. His successor, Lieutenant General Fabian Zimpande Msimang (the first black chief of the SAAF) will have trouble keeping all but executive travel jets in the air if current funding problems continue.

The once formidable South African navy now spends little time at sea. Replacement parts and maintenance budgets barely exist, leaving only one of the navy’s four new frigates operational and only one its four new submarines able to put out to sea (Sunday Times [Johannesburg], December 10, 2012). South African Navy ships and SAAF aircraft carry out anti-piracy operations in the Mozambique Channel, though this mission is also threatened by underfunding.

Despite economic troubles and a collapsing military, South Africa still desires to be a major player in Africa, which encourages it to commit to missions that stretch the military’s capacity to breaking point.  Unless current trends are reversed, the steady transformation of the SANDF into an assembly of riot police and border guards will be completed in just a few years. Geography and reputation have left South Africa with few external enemies, but it is also extremely wealthy in various resources. South Africa was only cobbled together from various constituent parts a little more than a century ago, and it would not be surprising if a general collapse of South Africa’s security infrastructure invited the emergence of secessionist movements drawing on both domestic and external inspiration. South Africa’s eventual inability to project force beyond its borders will also have important implications for regional security in sub-Saharan Africa.

This article first appeared in the January 25, 2013 issue of the Jamestown Foundation’s Terrorism Monitor.