As Turkish troops and armor cross the border as part of Operation Gunes (Sun), the embattled nation of Iraq is once more host to a major military offensive, this time in its remote and sparsely populated northeastern region. Surprising many who expected Turkey to wait until spring before launching its expected drive to destroy bases of the rebel Kurdistan Workers’ Party (PKK), the Turkish Armed Forces (TSK) appear to have taken the initiative in the decades-old struggle with a risky winter campaign. Despite the deep snow still covering this mountainous battleground, the TSK has taken advantage of optimal political conditions to preempt the PKK’s traditional spring offensive.

Iraqi Foreign Minister Hoshyar Zebari described the raid as a “limited military incursion,” but one with the potential to “destabilize the region, because really one mistake could lead to further escalation” (BBC, February 23). The Turkish General Staff states TSK troops “will return home in the shortest time possible after its goals have been achieved” (Turkish Daily News, February 23). Those goals remain loosely defined as neutralizing “members of the terrorist organization PKK/ KONGRA-GEL stationed in the north of Iraq and to destroy organizational infrastructure in the region” (Hurriyet, February 23), but may also include an attack on the main PKK/Kongra Gel base in the Qandil Mountains, nearly 60 miles from the Turkish border. The Turkish press has been warned away from the area of operations.

Minimal international reaction to a series of small raids and regular cross-border bombardments over the last year confirmed for Turkey’s leadership that opposition to a major strike on PKK targets in northern Iraq would only be minor—if civilian casualties could be held to a minimum. As a result, a major cross-border operation that was unthinkable a year ago has become reality today.

The incursion began on the night of February 21-22 after an intensive cross-border bombardment by long-range artillery and aircraft. Operation Gunes is led by the 2nd Army Command in Malatya and overseen by the 7th Army Corps in Diyarbakir (Milliyet, February 22). Turkish infantry and Special Forces are receiving close aerial support from Turkey’s small fleet of Cobra attack helicopters. Transport helicopters are also being used to move elite Gendarmerie and Special Forces teams past difficult snow-bound areas. Thousands of men have been moved up to the border to prevent a PKK flight into Turkey’s southeastern provinces and to stand ready should Turkish forces in Iraq require reinforcements. Small bases with helicopter pads, thermal cameras and artillery have been set up near PKK infiltration routes in the Cudi, Gabar, Kupeli, Tanin and Kato mountains (Today’s Zaman, February 19). Turkish Special Forces are also using Sikorsky transport helicopters to assault PKK positions within Turkey near Sirnak (Milliyet, February 22).

There are signs that PKK formations have broken into smaller groups in an effort to evade Turkish forces, some moving southward, deeper into Iraq. There are reports of confusion in the PKK ranks after some of their positions were bypassed by Turkish troops, leaving the fighters wondering what the TSK’s real intention was (Khaleej Times, February 24). Preparatory aerial and artillery attacks have disrupted PKK communications and sparked dissension within the movement’s ranks. Turkish warplanes continue to run dozens of sorties each day, with the PKK leadership apparently ranking as prime targets. The TSK also claims to have destroyed large concentrations of PKK military equipment, including explosives, anti-aircraft weapons and stores of land mines (Hurriyet, February 25). 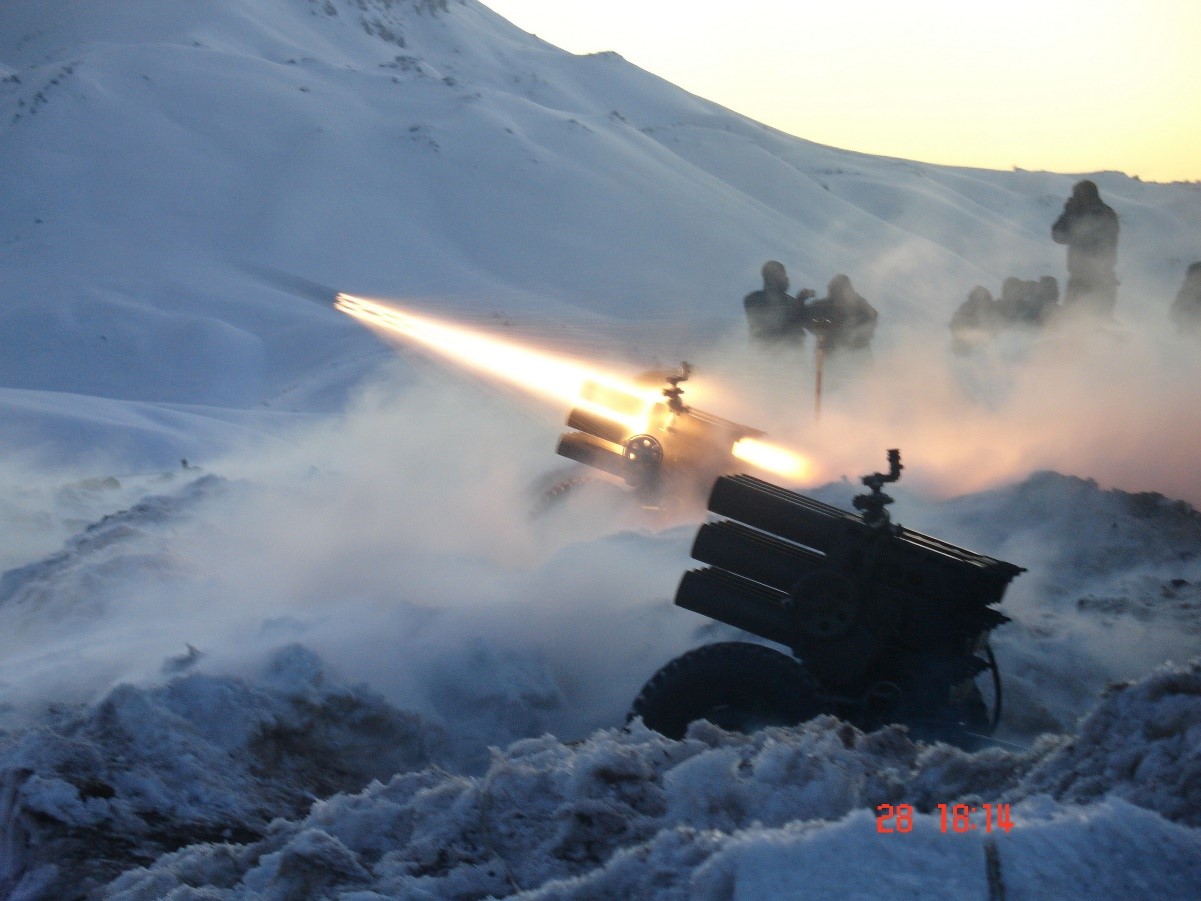 The PKK reported clashes almost immediately in the Zagros Mountains region near the intersection of the borders of Turkey, Iraq and Iran (Journal of the Turkish Weekly, February 22). Operations were also carried out in the Hakurk region, south of the Turkish border city of Cukurca, which is a main base for helicopter gunships operating across the border (Turkish Daily News, February 23; Hurriyet, February 25). The PKK claims to have shot down one helicopter near the border on Saturday, killing eight Turkish soldiers (Hurriyet, February 25). The TSK has acknowledged the loss of the helicopter, but mentions only “unspecified reasons” as the cause of the crash (Today’s Zaman, February 25). Warplanes and helicopters also work out of the military base at Diyarbakir, the scene of local Kurdish protests against the military operation.

The actual size of the Turkish forces taking part in the raid is subject to some dispute—figures range from U.S. military estimates of a few hundred men to Turkish press reports of 15,000 soldiers (Hurriyet, February 23; Milliyet, February 22). One report claimed the participation of 3,000 members of Turkey’s Special Forces (CNN Turk, February 23). The Special Forces have been carrying out specialized training for months now at bases in southeastern Turkey in preparation for the attack.

After weeks of heavy aerial bombardment, PKK bases at Zap and Avasin are reported to have been overrun by Turkish troops carried in at night by Sikorsky helicopters with night-vision equipment. Special Forces teams in Zap were reported to be hunting Yucel Halis—also known as Aliser—a PKK commander who oversaw an October 2007 bombing in Semdinli that killed 13 soldiers. The Zap base was heavily defended by anti-aircraft guns and explosives placed around the perimeter (Cumhuriyet, February 26). Survivors were observed fleeing toward the PKK main base in the Qandil mountains after leaving behind booby traps and land mines to slow the Turkish advance. Some fighters attempted to escape in rubber boats down a small brook (Yeni Safak, February 26).

The PKK Threatens to Expand the Battle

PKK spokesman Ahmed Danis warned: “If Ankara continues its attacks we will carry out guerrilla operations in Turkish cities, trying to avoid the civilian population.” Unless Turkey ceased its raids into northern Iraq, the PKK “will move the theatre of combat to the heart of Turkish cities” (Gulf Daily News [Bahrain], February 24). Dr. Bahoz Erdal, the commander of the Hezen Parastina Gel (People’s Defense Force—the PKK’s military wing), has called on Kurdish youth in Turkey’s urban centers to unite and burn cars or do whatever else they can to make life in the cities unbearable. “In the big cities, Kurdish youth must give their reply to the military operations. Kurdistan’s guerrillas are not just 7,000 or 10,000, they number hundreds of thousands. They are everywhere …” (Firat News Agency, February 24).

The offensive has solid support from most of the Turkish opposition parties, but the Kurdish-based Democratic Society Party (DTP) has questioned whether the PKK is the sole target, while also refuting the possibility of a military solution to the decades-old conflict: “The solution is possible solely within the borders of Turkey. The [ruling] Justice and Development party (AKP) has prepared its own end with the operation” (Turkish Daily News, February 23).

Reaction from the Kurdistan Regional Government

The Kurdistan Regional Government (KRG) is seeking a withdrawal of Turkish forces and the implementation of three-way talks between Arbil (the KRG regional capital), Washington and Ankara. Though a statement from the office of KRG President Massoud Barzani warned of “massive resistance” in the event of civilian casualties, the Iraqi Red Crescent reports only minor civilian displacement and no civilian casualties in the opening days of the offensive (Reuters, February 23). Many people who use mountain pastures in the summer spend the winter in the plains or sheltered valleys, leaving the mountains largely empty of residents until spring. The KRG peshmerga militias do not usually patrol the region.

Only a day before the raid, Barzani warned of Turkish designs on Kurdish northern Iraq and the danger arising from repeated violations of Iraqi sovereignty. “There is a limit to our patience. If Turkish raids continue against Kurdistan and continue to affect people’s lives, we will not keep silent much longer” (al-Arabiya TV, February 25; Kurdish Globe, February 25). The peshmerga have been put on alert, but Barzani has urged the 80,000-strong Kurdish militia to show restraint in dealing with the incursion. On their part, the TSK has said in reference to the peshmerga that “local elements that do not resort to hostile acts against the Turkish Armed Forces” will not be harmed (Today’s Zaman, February 22).

The KRG reported a confrontation between the peshmerga and a detachment of Turkish troops, stationed on the Iraqi side of the border under a 1996 agreement with Baghdad that allows for Turkish monitoring of PKK activities in northern Iraq. A spokesman claimed that Turkish troops and armor tried to leave their camps near Duhok in defiance of the conditions of the agreement, but were forced back by units of the peshmerga (Today’s Zaman, February 22). Local sources reported that the peshmerga surrounded the Turkish troops and threatened to open fire, but both peshmerga authorities and the Turkish General Staff have denied the incident ever occurred (Hurriyet, February 24). More peshmerga units are being moved into the Duhok area, close to Turkish operations in the Hakurk region (New Anatolian, February 22). Other peshmerga have been moved to the Zakho, Amadiya, Sersing and Kanimasi regions along the Turkish-Iraqi border (Anatolia, February 24). As Mowaffaq al-Rubaie, Iraq’s national security advisor, warns, the longer Turkish soldiers stay inside Iraqi territory, the more likely a confrontation between Kurdish peshmerga and Turkish troops becomes (Hurriyet, February 26).

Reports continue that Turkish garrisons inside Iraq are taking unspecified “measures” to prevent fleeing PKK fighters from melting into the local Kurdish population (Today’s Zaman, February 25). The TSK has also made it clear that it expects “local Iraqi groups” (i.e., the peshmerga) to “prevent the PKK terrorist group members from entering their region and finding safe haven there.” Iran, whose Revolutionary Guards have also been engaged in fighting against Qandil-based Kurdish separatists, has moved troops up to its northern border with Iraq to prevent Kurdish fighters from seeking refuge across the frontier (Today’s Zaman, February 25).

After more than a year of intensive political and military preparation, Ankara is determined to make an end of the PKK. Despite politically necessary threats of “massive resistance,” the KRG has too much at stake to risk all in support of radical Marxists from across the Turkish border. The carefully engineered political conditions are so right for the timing of this offensive that it is taking place at a minimal diplomatic cost. The question is whether this is yet another in a series of limited Turkish attacks on the PKK that will fail to bring the struggle to a conclusion. There are abundant indications that Turkish forces will now go so far as to march into the main PKK base at Mount Qandil to eliminate the PKK threat. Operation Gunes is clearly having a devastating effect on the PKK leadership and infrastructure, but an intensive diplomatic and political campaign will be required to sustain and preserve the TSK’s success in delivering a decisive blow to the threat of PKK militancy.

This article first appeared in the February 28, 2008 issue of the Jamestown Foundation’s Terrorism Focus