The sparsely inhabited Afghan province of Zabul is nevertheless a strategic concern for U.S. and Coalition forces in Afghanistan, due to its location and majority Pashtun population. Zabul shares a border with Pakistan to the south and another with the unsettled Taliban hotbed of Kandahar to the west. Taliban activity is on the rise in Zabul and the Taliban publication Al-Sumud recently took the opportunity to interview a prominent military commander in Zabul province, Mullah Abd al-Qahhar (Al-Sumud, January 2010). The interview is dated December 23, 2009. 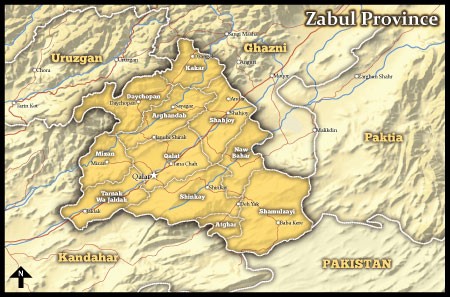 Mullah Abd al-Qahhar is described as a prominent leader of the 1980s jihad against the Soviets and the Afghan communist regime. His religious studies were interrupted by the conflict. After being wounded four times he joined the Taliban in 1994 and has been fighting Coalition occupation forces in Zabul for several years.

During the interview, the Taliban commander discussed the tactics used in Zabul province and the overall strategy of the Taliban forces. Abd al-Qahhar claims Taliban forces control most of the districts of Zabul, save for the “district capitals where enemy forces have their posts.” The mujahideen also control “all roads of enemy transport, including the Kabul-Kandahar highway. Whenever they try to move from one point to another, they face ambushes and landmines planted by the roadside.” Assembling and planting mines effectively required the establishment of specialized training courses to teach the skills needed for the remote control of explosives. All mujahideen units in the province now have expertise in these areas.

American forces are engaged against the Zabul Taliban, aided by a battalion of Romanian troops in the Shinkay and Shah Joy districts. Romania pulled out its 520 troops in Iraq last year while pledging to reinforce its battalion in Zabul by 108 soldiers in 2010 to better enable it to carry out its mission (Xinhua, June 30, 2009). Much of the Romanians’ Soviet-era equipment would be familiar to mujahideen veterans like Mullah Abd al-Qahhar.

When asked about President Obama’s decision to send additional forces to Afghanistan, the Taliban commander suggested that the president have a close look at former Soviet leader Mikhail Gorbachev’s remarks last November, when the ex-Soviet leader pointed to the Soviet failure in Afghanistan as a lesson for President Obama. In his remarks Gorbachev suggested that the current conflict was unwinnable and the United States should begin withdrawing troops rather than raising their numbers, stating, “I believe that there is no prospect of a military solution” (Bloomberg, November 10, 2009). Abd al-Qahhar sees the Afghanistan “surge” as only part of an American plan to establish a semblance of security in the country before beginning an evacuation. “I believe that sending more troops is only intended to expedite the mission of withdrawal and rehabilitation of the collaborating government to bear responsibility. However, at the same time, they do not conceal their fear that the collaborating government will fall less than one week after the exit of the Crusader forces.”

In classic guerrilla warfare fashion, Abd al-Qahhar states that “the citizens are the mujahideen themselves.” The Taliban have managed to ingratiate themselves into the local population by providing parallel administrations in each district that offer an alternative to the corrupt system managed by Kabul. The Taliban settle local disputes and offer a speedy and honest judicial system; in return the people provide the mujahideen with all of their needs.

Nevertheless, Abd al-Qahhar sees the greatest strength of the Taliban’s “Islamic Emirate” in its steadfastness against the global “Crusader union”; “The Emirate has never felt weak, never surrendered, never bargained, and never had any internal disputes or dissensions, despite all the ordeals and hardships it has gone through in its jihad against the Crusaders.”

Abd al-Qahhar also stressed the usefulness of suicide attacks, citing the suicide bombing of a military convoy in Shah Joy that he claims killed eight Romanians (possibly referring to the August 27, 2006 attack on an Afghan military prisoner convoy in which the Romanians took casualties when they came to assist) and a suicide car-bomb attack on an American base that he claims killed 23 Americans (the Mullah apparently refers here to the November 19, 2009 attack on an American base in Shah Joy that killed an American NCO of the 82nd Airborne Division) (Afghan Islamic Press, August 27, 2006; AFP, August 27, 2006; Xinhua, November 19, 2009). According to U.S. military sources, U.S. troops are “often met with outright hostility” in Shah Joy district (Stars and Stripes, November 12, 2009).

This article first appeared in the January 14, 2010 issue of the Jamestown Foundation’s Terrorism Monitor