The terrorist bombing that struck an Ashura Shiite religious procession in downtown Karachi on December 28 was followed by a wave of arson attacks that destroyed most of the commercial market district of that city. The apparent organization of the arsonists and the failure of security forces and the local fire department to restrain the arsonists or suppress the conflagration until most of the market area had been destroyed has raised serious questions about the government’s declaration that the arson attacks were a spontaneous reaction by Shiites to the bombing that killed 43 people. 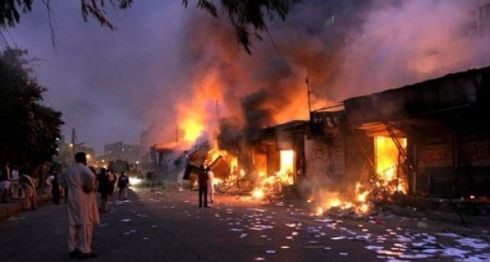 The Tehrik-e-Taliban Pakistan (TTP) has claimed responsibility for the bombing, which it says was carried out by a suicide bomber, though a police investigation says the bomb was an improvised explosive device (IED) detonated by remote control (AFP, December 30; Onlinenews.com.pk, January 5). Shortly before the attacks, reports emerged of CDs being distributed in Karachi that demonstrated the use of weapons and bomb-making methods (Daily Times [Lahore], December 22, 2009).

A respected Islamabad daily reported “the Rangers [a paramilitary under the Ministry of the Interior] and the police were simple bystanders watching the looters with folded hands” as apparently well-trained young men “methodically burnt one building after another, turning goods and property worth billions into ashes” (The News [Islamabad], January 2). Following the mass arson attacks, both the Sindh-based Muttahida Qaumi Movement (MQM) and the ruling Pakistan People’s Party (PPP) accused each other of failing to provide security and failing to check the fires. There were reports that local authorities sought permission to open fire on the arsonists, but authorization was denied (The News [Islamabad], January 2). There are accusations that the objective of the unknown arsonists was “not only to destabilize the city, but to pave the way for the mighty land mafia that is adamant to demolish all old, historical buildings and replace them with skyscrapers” (The News, December 31, 2009).

Interior Minister Rehman Malik provided a rather shocking explanation of the security collapse that allowed the markets of Karachi to be destroyed when he explained to Karachi business leaders, “The police and the Rangers do not know how to fire their guns. They have no training and the business community must contribute to a fund to provide training to these forces” (The News, January 2). A government suggestion that temporary markets could be built elsewhere was rejected by the business community on the grounds that acceptance might evolve into a final settlement as developers and influential politicians demolish the damaged markets and construct new commercial plazas with exorbitant rents.

The leader of the Sunni Islamist Jamaat-e-Islami political party, Syed Munawwar Hasan, suggested that India’s Research and Analysis Wing (RAW- Indian external intelligence) and U.S. private security firm Blackwater (now Xe Services LLC) may have played a role in the bombing. Blackwater (Xe) is commonly blamed for terrorist attacks in Pakistan. Noting that security forces did not act to prevent the arson and fire brigades did not respond for four hours, Syed Munawwar asked President Asif Ali Zardari whether the state “actually existed anywhere and why it did not act in time” (The News, December 31). Most notably in a city known for Sunni-Shi’a sectarian tensions, Syed Munawwar clearly stated that the arson attacks had been carried out by “conspirators” rather than the Shi’a community.

The Grand Mufti of Pakistan, Muhammad Rafi Usmani, stated at a press conference days after the destruction that Blackwater was responsible for the bombing of the procession of Shiite mourners celebrating Ashura (The News, December 30). The Interior Minister blamed “certain powers” (India is most likely to be understood here) for the destruction of Karachi’s markets, but denied the presence of Blackwater (Xe) private security forces in Pakistan (Daily Times [Lahore], January 2; The News, January 2).

The National Assembly leader of the Sindh-based Muttahida Qaumi Movement (MQM), Dr. Farooq Sattar, appeared at a press conference alongside Interior Minister Malik to state that “land and drug mafias” were behind the Ashura violence (The News, January 1). Malik said the bombing was not a suicide attack and the markets had been set aflame in an organized rather than spontaneous manner (Daily Times, January 2; The News, January 1). An investigation is expected in order to inquire why several hours passed before any effort was made to extinguish the blazes.

The blast was followed by the alarming news that the alleged mastermind of the December 28 Ashura bombing, Sirajullah (a.k.a. Zeeshan, a.k.a. Shani), had been in police custody since December 23 and had revealed details of the bombing (including planning and the type of explosives) before the attack was carried out (Daily Times [Lahore], January 1, January 3; The Nation [Islamabad], December 31, 2009).

This article first appeared in the January 7, 2010 issue of the Jamestown Foundation’s Terrorism Monitor