Violence in the strategically located Somali city of Las Anod continues to threaten a new round of warfare in a region that has largely evaded the interminable fighting consuming Mogadishu and southern Somalia. Las Anod is the administrative capital of Sool region, one of three Somali regions at the center of a territorial dispute between the self-declared independent state of Somaliland and the autonomous Somali region of Puntland. 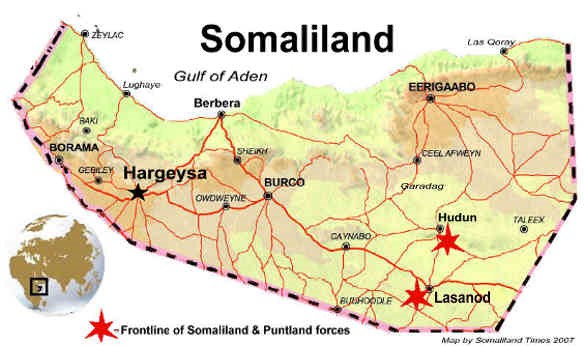 Colonel Osman Yusuf Nur, commander of Somaliland’s 12th infantry division, was killed in a November 1 roadside bombing that appeared to target his vehicle (Shabelle Media Network, November 1). The Colonel was on his way to visit the scene of an earlier explosion in Las Anod when a remote-controlled bomb blew up his vehicle, killing as many as five other members of his entourage. There were reports that troops rushing to the scene opened fire on civilians gathering at the scene of the bombing (Garowe Online, November 2).

The bombing came at a time of high tension in Las Anod as the dispute between Somaliland and Puntland over the regions of Sool, Sanaaq and Cayn (SSC) heats up, with reports of clashes between Somaliland forces and Puntland militants in Sanaag region at the end of October (Waaheen, October 29). Hundreds of Las Anod residents have also taken to the streets to protest the presence of Somaliland troops, who were reported to have fired on the stone-throwing demonstrators in response, wounding two (Shabelle Media Network, November 2; Garowe Online, November 2; Mareeg Online, November 2). The town was placed under curfew and over 20 individuals arrested in connection with the bombing.

The day before the assassination, former al-Shabaab spokesman Mukhtar Robow “Abu Mansur” threatened Somaliland and Puntland with invasions by al-Shabaab due to their failure to implement Shari’a (AllPuntland.com, October 31). It was the first statement from Mukhtar Robow since he was replaced as the movement’s spokesman in May (see Terrorism Monitor, June 4). Only three days before the attack, Somaliland’s president, Dahir Riyale Kahin, called for war against al-Shabaab, which is led by Somaliland native Shaykh Ahmad Abdi Godane “Abu Zubayr.”

To date, there has only been one claim of responsibility for the bombing, coming from one Burale Yusuf, who claimed the act was carried out by a heretofore unknown anti-Somaliland group, the Jabarti National Movement. Burale escaped an early morning raid on his house in Las Anod by Somaliland police forces, though tribal elders quickly organized a press conference to reveal Burale is known as an insane person in the community and was completely incapable of organizing such an attack (Somaliland Press, November 3).

While suspicion has fallen on al-Shabaab, the radical Islamist group is far from the only suspect in the bombing. Besides the radical Islamists, there is also the Northern Somali Unionist Movement (NSUM), which opposes the secession of Somaliland and its control of the SSC region (n-sum.org, May 14).

There is also the Somali Unity Defense Alliance (SUDA) of Colonel Abdi Aziz “Garamgaram” Muhammad, a pro-Puntland militia which has committed several attacks on Somaliland security forces since its formation earlier this year (Garowe Online, November 9).  Garamgaram is a former commander in the militia of notorious warlords and accused war criminal General Muhammad Said Hersi Morgan, known as “the Butcher of Hargeisa (the capital of Somaliland)” for his brutal campaign in the region in the late 1980s against opponents of dictator Siad Barre. SUDA has been described as the military wing of NSUM (Maanhadal.com, November 19, 2008).

Though the SSC region falls within the boundaries of the former British Somaliland, which Hargeisa used in determining the borders of Somaliland, the majority of its citizens belong to the Darod/Dhulbahante clan, which has close ties to Puntland. Hargeisa’s rule over the regions has proven increasingly unpopular since it sent its troops in 2007 to expel Puntland forces that had been present in the area since 2003. The Dhulbahante made a brief effort in 2008 to form an autonomous state from the three regions to be known as the Northland State of Somalia, though some members of the clan support Hargeisa’s rule.