When Abdul-Khalim Sadulayev succeeded the late Aslan Maskhadov as the leader of the Chechen resistance, he was initially described by Russian sources as an Arab and a representative of al-Qaeda. Even after it was shown that the new President was a Chechen, many observers suggested that the presidency of the Islamic scholar would function merely as a rubber-stamp for the terrorist ambitions of warlord Shamil Basayev, Arab fighter Abu Hafs and others. Contrary to these expectations, the young President has moved the Chechen resistance away from terrorism and any potential association with al-Qaeda. Military operations are the order of the day, and expansion of the conflict is the long-term strategy. While Maskhadov was never able to assert complete control over extremist factions in the resistance, the raid on Nalchik (capital of Kabardino-Balkaria) suggests that Sadulayev is ready to pursue a unified military solution to the Chechen conflict (unless Russia offers terms for peace). Recent events also demonstrate the growing influence of Chechen field commanders like Doku Umarov, who have respectable military records relatively untainted by charges of terrorism. 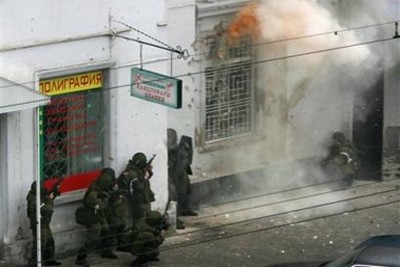 Urban Combat during the Nalchik Raid

As Basayev admits, the Nalchik raid was, in some ways, a botched job. As early as October 8, a captured militant informed police that a large-scale attack was about to be launched on Nalchik [1]. On October 11, a large cache of explosives was discovered, followed by a party of militants being trapped in a Nalchik suburb on the morning of the 13th. According to Basayev, local fighters insisted on carrying out their plans despite Russian awareness that an attack could be imminent. When the raid began, parents worried about another Beslan massacre and rushed to evacuate the schools, but these did not figure in the militants’ list of targets.

Basayev reported that the mujahideen “stormed 15 military objects” [2] and British-based rebel spokesman Akhmad Zakayev used the phrase “legitimate military operation” to describe the raid [3]. The “military targets” of the rebels were carefully listed in their post-raid statements. Sadulayev cited strict orders to the fighters to avoid civilian casualties at all costs: “Our soldiers attacked military targets… where there were no civilian citizens… Such military operations by our troops will from now on become, God willing, the constant lot of the occupiers and their servants everywhere in the Caucasus” [4].

The attack was more effective than Russian spokespersons have admitted to, and the number of “Wahhabi” dead has almost certainly been inflated by adding the bodies of male civilians to their totals. Though their own casualties were high (with 41 out of 217 insurgents killed, according to Basayev), most of the raiders appear to have escaped with captured arms. It was a poor showing by Russian security forces who had several days advance notice of the raid and were reinforced by hundreds of Special
Forces members.

Most significantly, the Nalchik operation was almost exclusively carried out by fighters from the “Caucasian Front” established by Maskhadov. These Ingush, North Ossetians, Karachays, and Cherkess joined local Kabardians and Balkars in carrying out their missions with only minimal Chechen involvement in the operation. This constitutes a major difference from the Nazran raid of June 2004, when Ingush militants received substantial Chechen assistance.

New Leadership from the President

Relations between Maskhadov and Basayev were always influenced by their past, thus inhibiting cooperation between the two. Basayev needed Maskhadov to legitimize the resistance movement through his elected role as president, while Basayev was too valuable (and too powerful) for Maskhadov to eliminate. In Maskhadov’s last year the two continued to cooperate on military raids (like that on Nazran), while Basayev otherwise remained outside the official command structure as leader of his own battalion of suicide-fighters. Sadulayev’s presidency allows Basayev a chance to reintegrate with the Chechen command. Before Maskhadov’s death in March 2005, Basayev claimed to be preparing “more Beslans.” By June, Sadulayev was declaring that “the Chechen government does not plan any operations similar to the Beslan one” [5]. Of course, all this has been tried before. Maskhadov was in a perpetual struggle to harness Basayev’s energies in strictly military operations, but with limited success. (Basayev has noted that in his disagreements with Maskhadov, Sadulayev acted as “a counterbalance in my opposition… not allowing us to overstep the mark”). The Sadulayev/Basayev relationship is significantly different, and will eventually be put to the test by the mercurial Basayev. 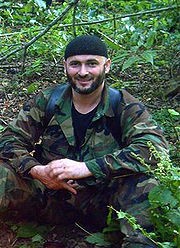 For the first time in the modern struggle, Chechens have a religious scholar at their fore, a more traditional type of leadership than the soldier-turned-politician model of Dudayev and Maskhadov. This thought was no doubt in the forefront in Maskhadov’s mind when he chose a successor. A native religious figure would allow for a unifying presence at the top and a chance to refute damaging (and popularly held) allegations that the Chechen armed forces are led and directed by Arab Islamists connected to al-Qaeda.

In a June 2005 Chechen-language video statement, Sadulayev addressed the Chechen people in terms very similar to those used in the manifestos of the Yarmuk Jama’at in Kabardino-Balkaria (an “assault subdivision” of Yarmuk took part in the Nalchik raid). The concerns are local rather than international: the evil of drug addiction, the inviolability of Chechen women, respect for elders and the loss of traditional values. These are basic appeals to the day-to-day reality of Chechen life; the strong social net having been ripped asunder by violence. Sadulayev calls for spiritual regeneration through dedication to the expulsion of the Russians. The president also dispensed with the epithet of “Wahhabism” as applied to the Chechen resistance by affirming that Chechens already knew how to pray in mosques and observe Islamic customs long before the word “Wahhabi” was heard in the North Caucasus [6].

The Search for Legitimacy

Sadulayev has repeated his view on terrorism at every opportunity: attacks must be limited to military and economic objectives, unarmed civilians are to be left alone, and any deviation from this represents an abandonment of Chechen values. Sadulayev is following Maskhadov’s lead in distancing the Chechen struggle from association with al-Qaeda or any other Arab jihadist struggle (in an interview just before his death, Maskhadov maintained that bin Laden “couldn’t find Chechnya on a map” [7]). In his statements there is an emphasis on the Caucasian struggle, and no mention of Iraq or other hot-spots of the war on terrorism. According to Sadulayev, the Chechen resistance “recognizes conventional international law and respects the democratic values established in the foundations of the state structures of many countries of the world; but on the other hand, these must not become a pretext for imposing laws on the Chechens that contradict our spiritual values” [8].

The assassination of Chechen ex-president Zelimkhan Yandarbaev (responsible for fund-raising in the Persian Gulf states) by Russian agents in Qatar and the attraction of the Iraq war for militant Islamists have combined to decrease Arab funding and influence in the Chechen conflict. Rather than “go it alone” with severely depleted resources, the Chechens have created another option—spreading the conflict to divert pressure from Chechnya while using the arms stockpiles of Russian security services as convenient armories.

Both Sadulayev and Basayev complain that the international media, which has an otherwise insatiable appetite for “terrorist” actions, routinely ignores Chechen military operations. The Chechen information war has ground to a near halt for lack of funding. It is an ongoing dilemma for the Chechen leadership, which desperately need to bring international attention to its cause. Basayev thought he had discovered the answer by turning the Russian methods of “state terrorism” against the Russians themselves in failed terrorist actions at Beslan and the Nord-Ost Theatre in Moscow. Although his arguments have a certain post-moral logic to them, his practical efforts in this vein have set the Chechen cause back rather than furthered it. Periodic city-scale assaults on military and political targets may provide a means of putting the North Caucasus on the front pages without risking the international approbation that follows mass hostage-takings.

The importance of having a native Islamic scholar leading the Chechen resistance cannot be overstated. Sadulayev himself draws upon the 18th and 19th century rebellions of Shaykh Mansur and Imam Shamil in calling for a pan-Caucasian uprising. If the Chechen command wishes to exploit the growing dissatisfaction with Russian rule in the North Caucasus, then they will need the cooperation of Basayev. A veteran of pan-Caucasian organizations since the early 1990s, it is Basayev who has traveled through the Northern Caucasus in the last few years, developing ties to militant groups. Many of his personal links, such as to Dagestan guerrilla leader Rappani Khalilov, date back to Basayev’s pan-Caucasian legion that carried out the ill-considered attacks on Dagestan in 1999.

As Russian President Vladimir Putin seeks to impose order in the Caucasus rather than create it, the Russian Duma passes more counter-terrorism bills designed to eliminate the mounting insurgency with a few strokes of the pen. For years Russian security forces in the North Caucasus have trumpeted their repeated destruction of a phantom “terrorist organization” led by Karachay fugitive Achimez Gochiyayev while a real uprising was brewing beneath their feet. Systematic corruption, arbitrary police brutality and needless provocations like closing most mosques (as in Kabardino-Balkaria) have severed the allegiance of many young men from the state. The Nalchik raid was in no way a general uprising, but was successful enough to aid in the ongoing recruitment of fighters.

Sadulayev is poised to become a force by proving that his talk of a “Caucasian Front” against Russia is not empty, but he will need to rein in the excesses of Commander Basayev and others. The now daily fighting between security forces and jama’at members in Dagestan, Ingushetia and Kabardino-Balkaria are the fall-out from Moscow’s decades-old mismanagement of the North Caucasus region, and provide fertile ground for Sadulayev’s leadership—if he survives assassins long enough.

This article first appeared in the November 3, 2005 issue of the Jamestown Foundation’s Terrorism Monitor