A new wave of heavy fighting broke out in Mogadishu on April 19 that lasted for over 48 hours and left more than 80 dead. More residents continue to pour out of the city past Ethiopian tanks awaiting further attacks from the Islamists (al-Jazeera, April 21). 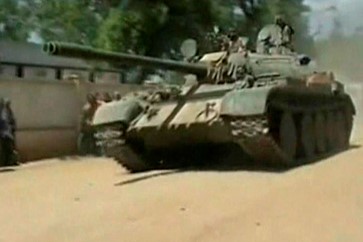 Numerous eyewitness reports claim that Ethiopian troops entered the al-Hidaya mosque in Mogadishu, where they killed 11 Somali civilians, including a number of preachers and the imam of the mosque, Shaykh Said Yahya. A further 10 civilians were killed outside the mosque. The preachers were members of the Tablighi Jamaat, a normally non-political Islamic missionary order that originated in India and has spread to East Africa, among other places. The Tablighis are not known to have played any part in the Islamist insurgency in Mogadishu. One of the surviving preachers, Shaykh Muhammad, claimed: “We believe the reason behind the attack was a fight against Islam, and to completely destroy areas where it is active, and make it stagnant” (Radio Shabelle, April 24).

In Washington on an official visit at the time, Somalia’s interim President Abdullahi Yusuf described Ethiopian clashes with “terrorist groups named al-Shabaab and al-Qaeda,” but claimed “there is no incident where soldiers entered a mosque and slaughtered the people inside” (Garowe Online, April 25). A spokesman for the Ethiopian Foreign Ministry stated that the account of Ethiopian troops killing civilians at the mosque was “a completely fabricated story designed to blackmail the Ethiopian army, one of the most disciplined forces anywhere in the world” (Guardian, April 25).

The throats of seven of the victims were slit, which Amnesty International described as “a form of extra-judicial execution practiced by Ethiopian forces in Somalia” (AI Press Release, April 23). A later statement from the Ethiopian Foreign Ministry eventually acknowledged the killings had taken place, but pinned the blame on the Islamist Shabaab militia: “The cutting of the throats of even enemies and mutilating bodies is not in the tradition of Ethiopian troops. On the other hand, the al-Shabaab [Islamist] terrorists have never been ashamed of these types of atrocities” (AFP, April 25). A December 2007 statement from Mogadishu’s dominant Hawiye clan deplored a number of “grave violations of human rights” committed by Ethiopian occupation troops, including “throat slitting” (Appeal by Hawiye Council in London, December 12, 2007).

Forty-one Quranic students in the mosque ranging in age from nine to 18 were taken away by Ethiopian troops and eventually transferred to the local police, where they were being investigated for terrorist activities (Shabelle Media Network, April 26); 37 of the students were released on April 24.

The massacre at al-Hidaya mosque has thrown the peace talks scheduled to begin in Djibouti on May 10 into doubt. A number of opposition leaders already in Djibouti, including Shaykh Sharif Shaykh Ahmed, are reported to have left Djibouti after receiving reports of the mosque incident.