A sustained cross-border campaign by Uganda’s Special Forces to eliminate the Lord’s Resistance Army (LRA) in cooperation with the military of the Democratic Republic of the Congo (DRC) and the Sudanese People’s Liberation Army (SPLA) of South Sudan appears to be yielding results nearly a year after Operation Lightning Thunder began. 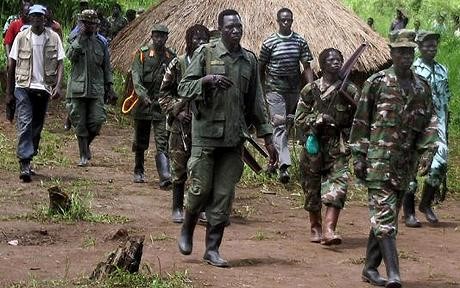 The perilous condition of the scattered LRA forces was best revealed by the surrender of senior LRA commander Charles Arop, notorious for his supervision of a typically senseless LRA massacre of 143 Congolese civilians in the village of Faradje using axes, clubs and machetes on Christmas Day, 2008 (New Vision [Kampala], November 5; AFP, November 5).  Continuing in a means of propagating itself, the LRA kidnapped 160 children for use as labor, sex-slaves or fighters (the latter must usually murder their own parents as part of the LRA’s method of breaking the mental resistance of its recruits). Arop recently commanded a force of over 100 fighters, but continuous attacks by the Ugandans devastated his command. Referring to Arop’s surrender, Lieutenant-Colonel Felix Kulayigye of the Ugandan People’s Defense Forces (UPDF) noted, “He was only left with one fighter, so what choice did he have?” (AFP, November 5).

Among those to come in recently was the last of the four wives of feared LRA Brigade Commander Okello Kalalang, who was killed in a September bombardment of LRA positions in the Central African Republic (CAR).

Other rebels are reportedly eager to surrender due to the deteriorating conditions in LRA camps, though all are aware that escape attempts are punished by the LRA with instant death. The breakup of the LRA into smaller units following the onslaught of Operation Lightning Thunder has weakened the movement’s capabilities, with the small units constantly on the move. According to the recently surrendered Lieutenant Francis Opira; “Life has become hard. We are few, which forces us to do a lot of work. Walking in the long bushes has also become tiresome” (New Vision, November 3). The large number of LRA officers and NCOs that have turned themselves in demonstrates a loosening of the iron discipline that once kept the LRA in the field despite a distinct absence of popular support. Without constant indoctrination, many of the abductees who form the majority of the LRA’s strength have begun to think of a return home under the lenient conditions being offered by Kampala.

A group of nine LRA members who surrendered following a late October battle in the Central African Republic cited a power vacuum in the leadership and a shortage of food in the bush as the main reasons behind their submission. All nine were under the command of Lieutenant Colonel Otto Malaba and Lieutenant Ochen, who continue to operate along the DRC-CAR border (Daily Monitor [Kampala], November 2).

This article first appeared in the November 13, 2009 issue of the Jamestown Foundation’s Terrorism Monitor