In the last few years, Russian security forces have inflicted considerable damage on Chechen resistance forces, most notably with the elimination of Chechnya’s president, the late Aslan Maskhadov. Like hitting a pool of burning oil with a hammer, however, their military blows have sent the fires of insurgency across the North Caucasus. These flames are now nurtured by the evolution of a new resistance structure, the military jamaat. 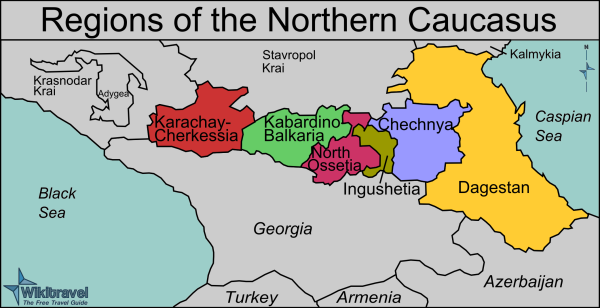 The traditional jamaat is not a new social structure in the Caucasus. Its roots can be found in the early jamaats of Dagestan at the time of Islamization. The jamaats were tribal-based communal organizations with political and economic roles. In time, the jamaats also assumed a defensive military role and commonly merged into more powerful confederations when the external threat was severe.

Today, in its simplest terms, a jamaat is a local community of Muslims, organized at an often basic level to share spiritual pursuits. Jamaats may be found from Wisconsin to Wessex, and in general have little to do with radical Islam. There are others, however, like Egypt’s notorious Gama’a al-Islamiyya that have been responsible for acts of terrorism carried out in pursuit of an Islamic state. In the North Caucasus, the modern jamaat movement has been growing for nearly 20 years, producing both peaceful and militant varieties of the organization. In the last few years, however, there has been a tendency for North Caucasian jamaats to form the basis for military resistance to the administrative and security structures of the Russian Federation. Not all militants are members of a jamaat, but these organizations have taken the lead in the fighting against Russian federal forces outside of Chechnya.

Origins of the Caucasian Jamaats

In South Russia’s present cauldron of religious, political and ethnic conflict, many jamaats have developed an Islamist political agenda. Their concerns, like their origins, tend to be local in nature. Land claims, mosque closings, moral laxity, political corruption, police brutality and other local problems dominate their public statements. Rarely is there mention of other theaters of the war on terrorism, or references to the so-called “global jihad.”

The involvement of the jamaats in the fight against Moscow appears to have been part of a plan conceived by Aslan Maskhadov not long after the expulsion of his forces from Grozny in 2000. As a veteran Soviet officer, Maskhadov understood the strategic need to broaden military resistance beyond the confines of Chechnya. Shortly before his death in 2005, Maskhadov declared that, by his orders, “additional sectors were established [early in the conflict]: Ingushetia, Kabardino-Balkaria, Dagestan, etc. Amirs of these fronts were appointed, and they are all subordinate to the military leadership of the Chechen resistance” (RFE/RL, March 7, 2005). Despite their many differences, the agent of Maskhadov’s efforts to expand the conflict was warlord Shamil Basayev.

Are the Jamaats Wahhabist?

Russian Interior Minister Rashid Nurgaliyev, who is himself a Muslim, has described the entire North Caucasus as a “breeding ground for Wahhabism,” a very loaded term in Russian political discourse (Interfax, September 21, 2004). Can the jamaats actually be described as Wahhabist? Their adopted brand of Islam is Salafist in nature, drawing on the example of the model community established by the Prophet Muhammad and his companions. In this way, they earn themselves the deprecating name of “Wahhabists” from Russian authorities (the term is borrowed from Saudi Arabia’s Wahhabist movement, the most severe example of Salafi beliefs).

The Wahhabis were, and are, a puritan-style Islamic revivalist movement started in 18th century Arabia to eliminate the religious innovations that had attached themselves to Islamic worship since the days of Muhammad. The Wahhabist movement has used their alliance with Saudi Arabia’s ruling family to spread their version of Islam internationally. Roaming Arab preachers made some inroads in the Caucasus in the early 1990s, but members of the generation that now provides the young membership of the jamaats are to a large degree discovering Salafi Islam on their own initiative.

The Salafists of the jamaats, like the Wahhabis of Arabia, reject the veneration of saints, requests for their intercession or pilgrimages to their tombs. These are all cornerstones of Sufi worship, which has until recently dominated Caucasian Islam. In some places, a war of words has erupted between the leaders of official state-sponsored Islam and the independent jamaats. Fairly typical is a recent condemnation of the official imams of Dagestan by the local Sharia Jamaat. The jamaat denounced official Islam as nothing more than “ancestor worship,” closer to Buddhism than Islam as it involves the veneration of “tombs, amulets and sacred monks.” These conflicts have impeded the growth of Salafism in Sufi religious communities, and the jamaats’ insistence on the rule of Sharia law alienates the still overwhelmingly secular population of the North Caucasus republics.

Of course, in Russia “Wahhabi” now refers to nearly all Muslims acting outside of official Islam, with the added association since 2001 of somehow being linked to al-Qaeda. It appears that none of the active jamaats have expressed any solidarity with Osama bin Laden’s group, though they do cooperate with the diminishing number of Arab mujahideen still active in the Caucasus. Since the September 11 attacks, when all “Chechen bandits” became “international terrorists,” Russian security services have maintained that the Chechen resistance is directed and funded by bin Laden’s al-Qaeda. The Chechen conflict, far from being directed by al-Qaeda, seems to have barely registered with bin Laden and his associates. Russian security forces have spent so long dealing with the elusive threat of al-Qaeda and the pursuit of terrorist non-entities like Achimez Gochiyayev that they have failed to notice the growth of a more concrete threat to the Federation’s stability. The jamaats enjoy a flexibility and insularity that have allowed their proliferation without much interference from the police.

Strategic Advantage of the Jamaat Organization

Islam in the Caucasus survived the long period of Soviet rule by decentralizing. Kremlin-directed official Islam sought to create rigid hierarchies and careful documentation of observant Muslims and their activities. Unofficial Islam went in the opposite direction. The Caucasus region’s leading order of Sufis, the Naqshbandi Brotherhood, continued to thrive by rejecting a traditional Sufi hierarchy of hereditary leadership. Naqshbandi spiritual leaders were chosen largely by consensus (with some exceptions), so that their arrest or demise did not threaten the continued existence of the lodge. Generally small in numbers (40 or less), their strong local base, reinforced by ethnic, clan and family ties, usually defied all Soviet attempts at infiltration. The other leading Sufi brotherhood, the Qadiris, maintained a hierarchal system that exposed their leaders to targeting by Soviet police.

It is important to recognize that the Soviet-era Naqshbandi Sufi lodges were not intended to wage any kind of military resistance. They do, however, provide a proven method of organizing locally while avoiding the attention of authorities. The jamaats are similar to the Sufi lodges in many ways, even if they represent conservative rather than popular forms of Islam. They rely almost exclusively on local membership and leaders. In most cases the jamaats are created spontaneously, fulfilling the spiritual needs of those returning to the Islamic fold. Official Islam, stained by corruption and pro-Kremlin subservience, has failed in its attempts to rein in the Islamic revival. It is the energy of the underground jamaats that Chechen warlord Shamil Basayev has devoted the last few years to harnessing.

Both Dagestan’s Sharia Jamaat and Kabardino-Balkaria’s Yarmuk Jamaat have made attempts to broaden their ethnic membership from the original core group. The Salafist interpretation of Islam practiced by the jamaats is open to a broader membership than the old Sufi lodges. The Yarmuk Jamaat made a statement explicitly rejecting any attempts to represent the jamaat as a “monoethnic organization” (Utro.ru, February 4, 2003). Russian converts to Islam have also joined the jamaats, and a few of these converts have been involved in combat actions. According to pro-Russian Chechen militia leader Sulim Yamadayev, these individuals have found their way to the jamaats from Krasnodar, Volgogrod, Stavropol and the Astrakhan Oblast.

This article first appeared in the June 2, 2006 issue of the Jamestown Foundation’s Terrorism Monitor