Mali’s security forces appear to have broken the latest Tuareg rebellion in that country as a month-long offensive concludes with the seizure of all Tuareg bases in north Mali. The leader of the revolt, Ibrahim Ag Bahanga, is believed to have escaped across the border to Algeria, where he may try to regroup despite the loss of most of his fighters to amnesties or Malian military operations. Mali is eager to bring a series of Tuareg rebellions to an end to allow for more intensive oil exploration by Chinese and Australian firms already at work in northern Mali. 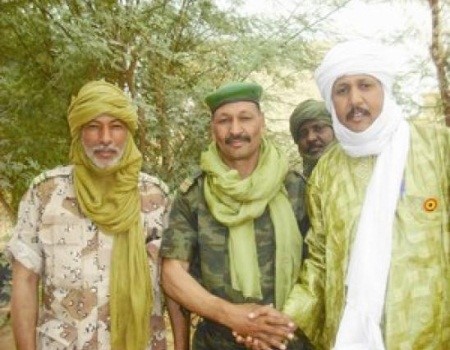 The offensive followed a deadly raid by Ag Bahanga’s Alliance Touareg Nord-Mali (ATNM) forces on a military camp in northern Mali in December. A rebel column led by Ag Bahanga is reported to have traveled 1,000 kilometers from its base near the Algerian border to attack the military garrison at Namapala. After the garrison repelled the first attack, a former rebel recently integrated into the army killed his platoon leader, leading to panic in the garrison forces. The second attack overran the camp, killing anywhere from 9 to 20 soldiers (Jeune Afrique, January 27). Afterwards, questions were raised as to how a Tuareg column was able to advance for a week undetected. Newsmagazine Jeune Afrique reported that the column was spotted by U.S. satellites, but the intelligence was not taken seriously in Bamako. Mali lost its own aerial reconnaissance capability when the Ukrainian pilots from its military helicopters returned home last April after one of the pilots was killed by rebel fire (Jeune Afrique, January 27).

At least 30 rebels were killed during the government’s response, an offensive through the Gao and Kidal regions of north Mali that included a three-hour battle at Tin Essalek on January 19 (Le Malien [Bamako], January 22). A prisoner who later succumbed to his wounds was identified by the Malian press as Shaykh Abdul, a Lebanese mercenary (Le Malien, January 19). Ag Bahanga proclaimed, “Today, the only alternative offered to us is the counter-thrust and armed warfare” (El Khabar [Algiers], January 25). U.S. Special Forces training missions are based in Mali as part of the Trans-Sahara Counterterrorism Partnership, but there are no reports of direct U.S. involvement in the government offensive.

The offensive was led by Colonel al-Hajj ag Gamou, a Tuareg, and Colonel Muhammad Ould Meïdou, an Arab from Timbuktu (L’Indépendant [Bamako], February 4). The combination of these two hardened officers with an intimate knowledge of northern Mali’s barren and inhospitable terrain shattered Ag Bahanga’s forces in a matter of weeks. At the risk of pitting Tuaregs against Arabs, Bamako has allowed Colonel Meïdou to assemble a force of several hundred Bérabiche Arabs for the work of eliminating Ag Bahanga’s rebels (Jeune Afrique, January 27). Hama Ag Sidahmed, an ATNM spokesman, alleged that Mali’s regular army has yielded its place to combined Arab-Tuareg militias designed to fight the Tuareg rebel movement (L’Indépendant [Bamako], February 4). The Bamako government is dominated by the southern Bambara, part of the larger West African Mande group.

Security forces reported the capture of 22 rebels and quantities of vehicles, fuel, food, arms (including heavy machine guns), and ammunition as they swept through the Tuareg camps. A Malian government official claimed that “All the operational and logistical bases of the group of Ibrahim Ag Bahanga have been taken and are under the control of our army and security forces” (Independent, February 11; L’Essor [Bamako], February 11). A spokesman for Ag Bahanga later denied in an interview that any rebel bases had been captured, claiming that the only bases taken by the military belonged to Algerian traders (BBC, February 11). Ag Bahanga’s main base was at Tinzaoutin, close to the Algerian border. Other bases were located at Tin Assalek, Abeïbara, Boureïssa, and Inerdjane (L’Essor, February 11). From these locations his men took scores of soldiers hostage and planted land mines on routes likely to be used by the military.

Ag Bahanga has repeatedly rejected participation in the Algerian-brokered peace talks that have brought most Tuareg rebels back into the national fold. Under pressure from the military offensive, Ag Bahanga had a sudden change of heart and appealed to Bamako and Algiers to reopen the peace process, but Mali’s government has run out of patience with Ag Bahanga and clearly stated there would be no further negotiations (El Watan [Algiers], February 12; L’Indépendant, February 4). The government in Bamako described Ag Bahanga’s appeal as a typical delaying tactic employed whenever things began to turn badly for the rebel leader (Afrol News, February 5). The last of Ag Bahanga’s hostages were released on January 25, 2009, after mediation from Libya and Algeria (Afrique en ligne, January 26).

The July 2006 Algiers agreement calls for greater development efforts in the northern regions of Gao, Timbuktu, and Kidal on the part of the national government in return for Tuareg rebels abandoning their demands for regional autonomy. A key part of the negotiations focused on the creation of mixed security units of former rebels and government troops to keep order in the north. Ag Bahanga’s rapidly diminishing group of rebels appears to have little public support in the region, possibly confirming speculation that the ATNM is only a front for Ag Bahanga’s smuggling activities (Le Malien, January 22; BBC, November 5, 2007).

On February 6, a Malian army officer spoke to the French press from the remote northern region, stating that Ag Bahanga was “no longer on Malian territory” (AFP, February 6). Algerian officials monitoring implementation of the Algiers agreement confirmed Malian reports that Ag Bahanga had crossed into Algeria with Malian troops in a pursuit as far as the border (Ennahar [Algiers], February 6). As the government offensive continued, ATNM fighters and members of Ag Bahanga’s own family began to pour into camps where former members of the dominant Tuareg rebel group, The Alliance for Democracy and Change (ADC), were gathering for a disarmament ceremony in the town of Kidal rather than follow Ag Bahanga across the frontier (Radio France Internationale, February 12). One of the leaders of those seeking reconciliation with the government is Lieutenant Colonel Hassan Ag Fagaga, who twice deserted the army to join his rebel cousin, Ag Bahanga (L’Essor, September 18, 2007).

The Ag Bahanga rebellion is the latest in a series of Tuareg uprisings in Mali and Niger since those countries gained independence from France in the 1960s. In a promising sign of surrender, nearly 600 former rebels met with authorities in Kidal on February 17 to lay down their weapons and return arms and vehicles seized from government forces (Elkhabar, February 17). The Tuareg rebellion has been exhausted for now, but continuing oil exploration on Tuareg lands in northern Mali promises to provide a new point of contention between the vastly different peoples of northern and southern Mali.

This article first appeared in the February 25, 2009 issue of the Jamestown Foundation’s Terrorism Focus