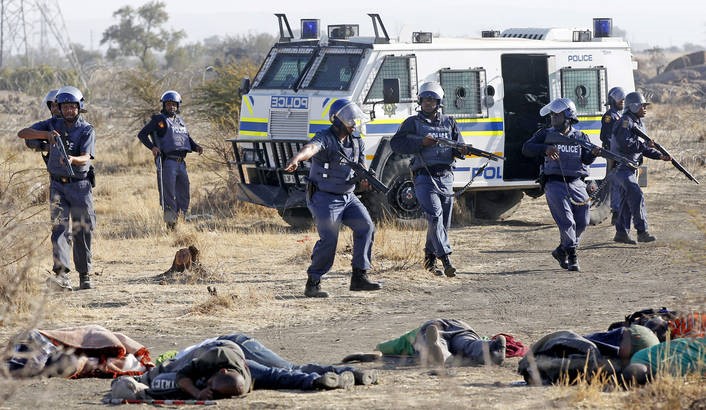 South Africa’s mining industry, which represents 20 percent of the national economy and 60 percent of its exports, has been riven by assassinations and bloody battles between rival unions and security forces, all fueled by the deep involvement of South Africa’s ruling African National Congress (ANC) in the mining sector’s labor strife. The proposal to deploy South Africa’s unionized military as an intervention force comes at a time when the SANDF is struggling to meet internal obligations and multiple foreign deployments on a shrinking budget.  The violence at the platinum mines is partly responsible for a decline in South Africa’s economic growth, which hit a new low of 0.9 percent in the first quarter of the year (AFP, June 4). Some 80 percent of the world’s platinum reserves are found in South Africa.

At the heart of much of the strife in the platinum mines is a struggle for control of unionized workers between the ANC-associated National Union of Miners (NUM) and the upstart Association of Mineworkers and Construction Union (AMCU), which has made impressive inroads on the membership of the NUM, a traditional source of funding and support for the ANC.  The mining sector is the largest private employer in South Africa and many of the mining unions have, until this point, been tightly tied to the ANC. AMCU members increasingly see South Africa’s police as allies of the NUM, creating an atmosphere in which labor tension could easily degenerate into political violence.

According to Mamphela Ramphele, a former managing director of the World Bank and a former chair of Gold Fields Limited (a major South African gold mining company), the crisis in the platinum fields is exacerbated by the ANC’s alliance with the NUM, a relationship that is manifest in an NUM office doubling as the local headquarters of the ANC: “How do you become an honest broker when one of the parties is your ally? It’s very difficult to be unbiased… That for me is a violation of good governance…” (AFP, June 6). Ramphele has recently formed a new political party to challenge the ANC called Agang (“Build”).

Mineral Resources Minister Susan Shabangu clearly identified ANC and NUM interests as identical in a May 24 speech in which she likened the pressure on the NUM to the conservative forces that destroyed the British mining unions in the Margaret Thatcher era:

You are under siege by forces determined to use every trick in the book to remove you from the face of the earth. [They want to make sure] that no progressive trade union will be permitted in the mining sector. It is only those who are willfully blind who cannot see that the agenda is to defeat and drive the African National Congress from power and reverse the gains of the national democratic revolution (Business Day [Johannesburg], May 24).

The NUM has already lost its majority status at works belonging to Anglo American Platinum and Impala Platinum and is now in a bitter and increasingly violent fight to retain its status at the Lonmin mines, where 70% of the workers now belong to the AMCU. With the AMCU now demanding recognition as the majority union at the Lonmin mines in Marikana and the expulsion of the NUM from local union offices, a South African labor court has given the NUM until July 16 to prove it is still the majority union or be expelled from their offices at the Lonmin works (majority status is defined as 51 percent) (AFP, June 4). AMCU leaders have complained for months that the NUM has been fraudulently listing AMCU members on NUM rosters to restore their membership and claim membership dues, a position seemingly validated by Lonmin’s June 4 announcement that it had suspended eight employees, some of them NUM shop stewards, for alleged union membership fraud (SAPA, June 5).

The AMCU’s aggressive recruitment campaign has been led by Joseph Mathunjwa, an emotional leader who frequently resorts to dramatic gestures and biblical allusions to promote his union in the face of what he regards as an alliance between the NUM and the ANC (Business Day [Johannesburg], June 7). South African platinum miners are looking for major increases in their wages and have turned to the AMCU to deliver on these demands rather than the more conservative NUM, which is perceived to be more cooperative with management. In the meantime, the turmoil in the mines has led to frequent and debilitating work stoppages.

A high-profile inquiry is ongoing in Pretoria to discover the facts behind the massacre of 23 striking mine-workers by security forces at the Lonmin platinum mine in Marikana on August 16, 2012. The deaths followed a week of violence that saw an additional ten people killed, including two policemen and two security guards (SAPA [Johannesburg], June 7). Testimony was heard recently from Major General William Mpembe, who was in charge of security operations at the time and has been blamed by many in the security sector for the deaths of the two policemen (SAPA [Johannesburg], June 7). Police have since been withdrawn from the Marikana region for their own safety, leaving a security vacuum in the area.

After a NUM shop steward was murdered and a NUM treasurer wounded on June 3, a spokesman for the Congress of South African Trade Unions noted that 60 people had been killed over the last year as a consequence of disputes at the Lonmin and Impala platinum mines (SAPA [Johannesburg], June 4). The Congress of South African Trade Unions (COSATU), a powerful government-allied trade union federation representing nearly two million workers, warned that the “anarchy” in the platinum mining region had created a “prevailing sense of insecurity… No one is being arrested and not a single person has been convicted for any of these [most recent] murders” (AFP, June 4).

With only three to four months left before South Africa’s major platinum producers are required to finish negotiations on new contracts for their employees, it seems essential that the dispute between the rival labor unions must be resolved quickly to avoid further violence and the possible shutdown of a large part of South Africa’s platinum-mining industry. While the deployment of “peacekeepers” from the hard-pressed SANDF may be able to put a temporary damper on the violence at the mines, it will not be able to address the union rivalry that is at the core of the crisis, particularly if they are seen as favoring the government-allied NUM. Even if the AMCU succeeds in displacing the NUM, it will have to satisfy the considerable expectations of its membership if it is to avert a NUM comeback or challenges from new labor groups claiming to be able to satisfy workers’ demands.