Taliban Deputy Leader Mullah Bradar Muhammad Akhand announced “a new series of operations” under the code name “Operation Ebrat” (Lesson) on March 27. The Taliban’s spring offensive is “aimed at giving the enemy a lesson through directing powerful strikes at it, which it can never expect, until it is forced to end the occupation of Afghanistan and withdraw all the occupier soldiers… We will add to the tactics and experiences of the past years new types of operations. The operations will also be expanded to cover all locations of the country, in order for the enemy to be weighed down everywhere” (Sawt al-Jihad, March 28). There are indications that a main target of the offensive will be the Afghanistan/Pakistan frontier, in particular the strategically vital Khyber Pass. 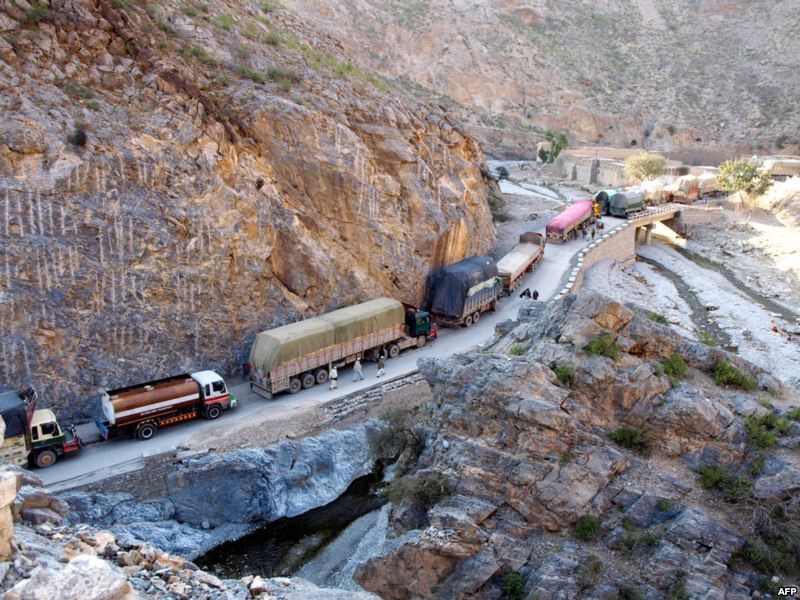 Citing an improvement in the skills and capacity of the Afghanistan National Army (ANA), Afghanistan’s Defense Ministry immediately dismissed the announcement as “a psychological campaign and not a reality which could be implemented on the ground” (AFP, March 25). In reality the situation along the border is extremely precarious and threatens the ability of Coalition forces to operate within Afghanistan.

Joint Intelligence Centers on the Border

The first in a planned series of six joint intelligence centers along the Afghanistan/Pakistan border was opened at the Afghanistan border town of Torkham on March 29. When the plan is fully implemented there will be three such centers on each side of the border at a cost of $3 million each. There are high hopes for the centers, which have been described by the U.S. commander in Afghanistan as “the cornerstone upon which future cooperative efforts will grow” (Daily Times [Lahore], March 30). According to U.S. Brigadier General Joe Votel, “The macro view is to disrupt insurgents from going back and forth, going into Afghanistan and back into Pakistan, too. This is not going to instantly stop the infiltration problem, but it’s a good step forward” (Daily Times, March 30).

The centers are designed to coordinate intelligence gathering and sharing between the NATO-led International Security Assistance Force (ISAF) and the intelligence agencies of Afghanistan and Pakistan. The project is an outgrowth of the earlier Joint Intelligence Operations Center (JIOC) established in Kabul in January 2007. This center, comprising 12 ISAF, six Afghan and six Pakistani intelligence officers, was initiated by the Military Intelligence Sharing Working Group, a subcommittee of the Tripartite Plenary Commission of military commanders that meets on a bimonthly basis (American Forces Press Service, January 30, 2007). The JIOC is designed to facilitate intelligence sharing, joint operations planning and an exchange of information on improvised explosive devices (IEDs). The working languages are English, Dari and Pashto, aided by a number of translators.

The new border centers will each be manned by 15 to 20 intelligence agents. One of the main innovations is the ability to view real-time video feeds from U.S. surveillance aircraft. The commander of U.S. troops in Afghanistan, Major General David Rodriguez, described the centers as “a giant step forward in cooperation, communication and coordination” (The News [Karachi], March 29). Despite such glowing descriptions, there remains one hitch—Pakistan’s military has yet to make a full commitment to the project. According to Major General Athar Abbas, the director general of Pakistan’s Inter-Services Public Relations, a military information organization, “At this time this proposal is being analyzed and evaluated by the concerned officials. But Pakistan has not yet come to a decision on this matter” (The News, March 30). General Abbas and other officials have declined to discuss Pakistan’s reservations or even to commit to a deadline for a decision. It is possible that the failure to sign on as full partners in the project may have something to do with the stated intention of Pakistan’s new prime minister, Yousaf Raza Gilani, to pursue a greater focus on negotiation than military action in dealing with the Taliban and other frontier militants. There may also be reservations on the part of Pakistan’s Inter-Services Intelligence (ISI) to share intelligence on their clients within the Taliban.

Actual intelligence cooperation along the border is hampered by a number of factors, not least of which is a basic inability to agree on exactly where the border lies. In the past, Pakistan has responded to complaints from Afghanistan of Taliban fighters infiltrating across the border by threatening to fence or even mine the frontier, a shocking proposal to the Pashtun clans that straddle the artificial divide. Afghanistan’s long-standing policy is simply to refuse recognition of the colonial-era Durand Line, which it claims was forced on it by British imperialists in 1893. Pakistan accepts the Durand Line, but the two nations are frequently unable to agree on exactly where the 1,500-mile line is drawn.

U.S. Intervention in the Frontier Region?

The United States is pursuing a number of initiatives to increase security and diminish the influence of the Taliban in the frontier regions of Pakistan, including a massive economic aid program, counter-insurgency training for the Frontier Corps and enhancement of the CIA’s monitoring and surveillance abilities in the area (Dawn [Karachi], February 26). The CIA already gathers information on the region from over-flights of its unmanned Predator surveillance aircraft, which can also deliver precisely targeted missiles on suspected Taliban safe-houses. Complicating efforts to increase security in the border region is a belief within Pakistan that the United States is preparing to intervene militarily in Pakistan’s frontier region (The Nation [Islamabad], March 24).

In a March 30 interview, CIA Director Michael Hayden declared that the Afghanistan-Pakistan border region would be the most probable source for new terrorist attacks on the United States: “If there is another terrorist attack, it will originate there.” The CIA chief warned that the situation along the border “presents a clear and present danger to Afghanistan, to Pakistan, and to the West in general and to the United States in particular.” Hayden also suggested that Osama bin Laden and Ayman al-Zawahiri were present in the Pakistan tribal frontier, where they were training “operatives who look Western” (NBC, March 30; Dawn, March 31).

A spokesman for Pakistan’s Foreign Ministry responded angrily to the CIA director’s comments, stating that if the United States has information about the whereabouts of the al-Qaeda leadership, it should share it with Pakistan so it can take action. “Such a statement does not help trace alleged hideouts… Terrorists have threatened Pakistan and targeted our people. We are, therefore, combating terrorism in our own interest” (Daily Times, April 3). Syed Munawar Hasan, leader of the Jamaat-e-Islami, Pakistan’s largest Islamic political party, suggested that Hayden’s statements were “white lies,” similar to Washington’s allegations of weapons of mass destruction in Saddam Hussein’s Iraq. Munawar urged the new government to stand fast in the face of what he described as U.S. threats to invade Pakistan despite the establishment of a democratic government (The News, April 2). The provincial assembly of the North-West Frontier Province issued a unanimous condemnation of Hayden’s remarks (The Post [Lahore], April 2; Geo TV News, April 1).

The location of the first joint intelligence center at Torkham reflects the strategic importance of this border town at the Afghanistan end of the fabled Khyber Pass. It is the main gateway for supplies to U.S. and ISAF forces within Afghanistan and is believed to be one of the main targets for the forthcoming Taliban spring offensive (The Nation, April 2). Linking Afghanistan’s Nangarhar Province and Pakistan’s Khyber Agency, Torkham is traditionally the busiest commercial border post between the two countries. A new round of attacks on Torkham may have already begun—as many as 40 oil tankers destined for Coalition forces in Afghanistan were destroyed in a series of explosions in a Torkham parking lot on March 20 (Dawn, March 24). There were 70 to 100 tankers awaiting clearance to cross into Afghanistan at the time. 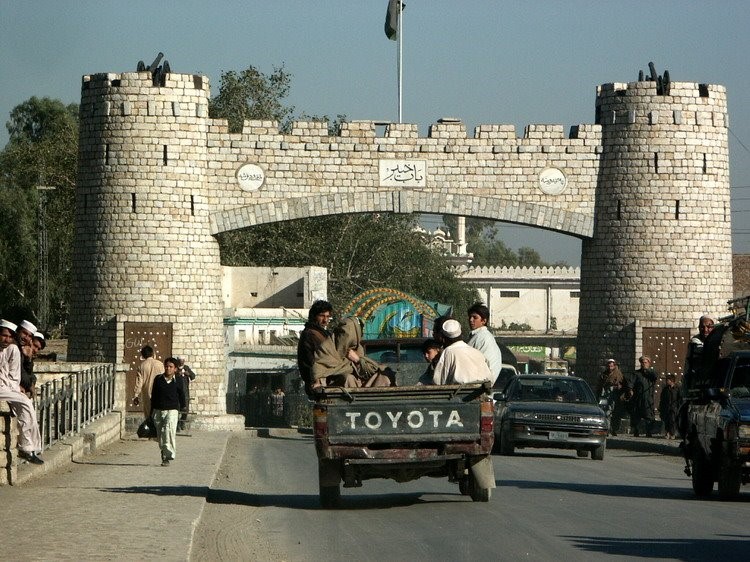 Only a day before the attack on the tankers, an effort by a U.S. Army colonel to expedite border clearances for military transports at Torkham failed when the chief Pakistani customs official refused to meet with her (Daily Times, March 19). Vehicles typically wait in parking lots at Torkham for up to 20 days awaiting clearance to proceed. Part of the problem is due to delays in permits faxed to Torkham from the U.S. base in Bagram—until these are received the vehicles are forbidden to cross into Afghanistan (Daily Times, March 27). There are also accusations that some tanker operators may be selling their fuel along the road in Pakistan before deliberately torching their vehicles at Torkham to claim the insurance on the missing load.

Torkham has also become a nearly unregulated transit point for legal and illegal migrants since the demolition of the border gate by the National Highway Authority of Pakistan two years ago. A series of meetings between Afghan and Pakistani officials—attended as well by NATO officials—have been unable to agree on the design and other details of a replacement gate. Smuggling and illegal crossings have spun out of control while tensions between the respective border authorities nearly erupted into open fighting in September 2006 (Daily Times, April 2).

Pakistan’s reluctance to make a full commitment to intelligence sharing raises a number of difficult questions: Is the ISI still cooperating or even aiding the Afghan Taliban? Do the military and the intelligence services operate outside of political control? Is it possible to collaborate with the Taliban and not the Taliban’s allies, al-Qaeda? Why do the better-armed and -trained regular forces frequently relinquish their security role in the frontier regions to the poorly-equipped Pashtun Frontier Corps?

After a meeting on security and terrorism issues with Chief of Army Staff Ashfaq Kayani on April 3, a spokesman for Prime Minister Gillani stated that the prime minister was formulating a comprehensive terrorism strategy “based on political engagement, economic development and backed by a credible military element” (Daily Times, April 3). Many within the new government believe that Musharraf’s aggressive military approach to the frontier crisis is responsible for the recent rash of suicide bombings and other attacks that have taken scores of lives across the country.

In the meantime there is a dangerous lack of coordination on border issues in which all parties bear responsibility. There is every indication that the Taliban have identified Torkham as a crucial weak point in the supply and logistics system that maintains the international military presence in Afghanistan. The failure to share intelligence combined with bureaucratic delays and infighting along the Afghanistan/Pakistan frontier threatens the entire Coalition mission in Afghanistan

This article first appeared in the April 3, 2008 issue of the Jamestown Foundation’s Terrorism Monitor