The commander of Iran’s Islamic Revolution Guards Corp maintains that it was the Guards’ ability to confront Kurdish guerrillas on their own terms that led to an apparent defeat of the Partiya Jiyana Azad a Kurdistane (Party of Free Life of Iranian Kurdistan – PJAK) after a three-month offensive.

Commander of the Islamic Revolution Guards Corps (IRGC) Major General Mohammad Ali Jaffari suggested that PJAK had mistakenly believed that Iranian forces would use “classic warfare” tactics incapable of defeating guerrillas in the field: “The IRGC’s capability in both classic and asymmetric and guerrilla warfare surprised the PJAK terrorist group so much that they surrendered… Since the IRGC enjoys asymmetric and guerrilla warfare capability, in addition to its capability in classic wars, the PJAK group was encountered in its own method… and they realized that we have the ability to deploy troops and defeat everyone everywhere” (Fars News Agency, October 8; ISNA, October 8).

Following a series of border incursions by teams of PJAK fighters, Iran deployed a force of 5,000 IRGC troops and Border Guards to largely ethnic-Kurdish northwestern Iran, where they destroyed a PJAK base in the Jasosan Heights near Sar Dasht city in West Azerbaijan Province (Fars News Agency, September 26). The offensive halted for a month following a Ramadan ceasefire negotiated by northern Iraq’s Kurdistan Regional Government (KRG), but operations resumed when it became clear PJAK had not used the break to withdraw to their bases in northern Iraq. The IRGC also claimed that PJAK had used the Ramadan ceasefire to dig tunnels in the Jasosan Heights along the border and to receive weapons and equipment supplied by the U.S. Consulate in Arbil (Fars News Agency, October 8).

After a number of battlefield setbacks that included the death of PJAK deputy commander Majid Kavian (a.k.a. Samakou Sarhaldan), PJAK unsuccessfully tried to have the ceasefire renewed, an impossibility so long as PJAK occupied Iranian territory (Sepah News, September 7). KRG president Masoud Barzani, wary of the possible implications of sending Kurds to secure the borders from other Kurds, instead urged both PJAK and their senior partner, the Parti Karkerani Kurdistan (Kurdistan Workers Party – PKK) to come to settlements with their respective Iranian and Turkish opponents (AFP, September 7).

By September 21, the IRGC was claiming to have killed over 180 PJAK fighters while driving the group out of northwestern Iran (Payvand Iran News, September 21). PJAK claimed to have killed 600 Iranian soldiers in its resistance to the Iranian offensive, a figure that has little basis in reality (AFP, September 15). The real figure is more likely in the dozens. Iranian Intelligence Minister Heidar Moslehi said that PJAK had agreed to stay one kilometer away from the Iranian border but promised that Iranian forces would continue taking action against PJAK until the group was destroyed (Mehr News Agency, October 9).

Brigadier General Ali Shademani, Deputy Head of the Operations Department of the Iranian Armed Forces, told Iran’s official press that PJAK was a creation of the United States, the United Kingdom and Israel and would be replaced by these nations once it became clear PJAK would not succeed in its objectives (Press TV, September 29). PJAK in turn has accused the United States of providing intelligence about the Kurdish insurgents to Turkey which is then shared with the Iranians, though Ankara has denied passing on U.S. intelligence reports to Tehran (Rudaw.net, September 10). 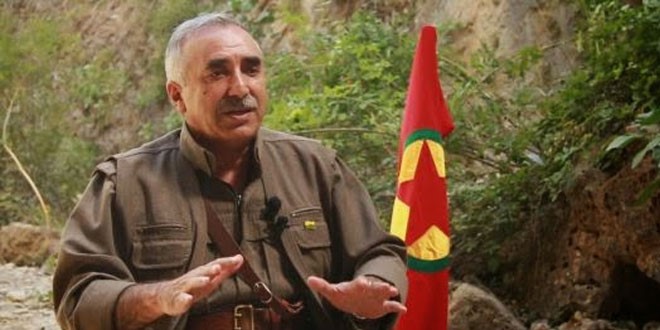 Some Turkish media sources reported that the effective leader of the PKK, Murat Karayilan, was captured during Iranian operations in mid-August. The Iranians allegedly located the PKK commander by using intelligence provided by Turkey’s Milli Istihbarat Teskilati (National Intelligence Organization – MIT).  It is widely suspected in Turkey that Iran intervened to save Murat Karayilan from being killed by Turkish bombing by arresting and later releasing the PKK leader (Hurriyet, October 17). In this scenario it has been speculated that the PJAK withdrawal from its forward bases in Iran was the price of Karayilan’s freedom (Yeni Safak, October 12; Today’s Zaman, October 12; Hurriyet, October 11).

Karayilan affirmed that he was not under detention in Iran when he appeared on the PKK-affiliated Roj TV in early October, a declaration Iranian authorities supported by saying they had no information regarding the alleged arrest of Karayilan (Rudaw.net, October 18). Turkish authorities expressed satisfaction with Iran’s denials, saying Turks should “turn a blind eye” to the allegations while refuting a rumor that Karayilan had been captured by Syrian forces (Hurriyet October 14).

This article was first published in the October 20, 2011 issue of the Jamestown Foundation’s Terrorism Monitor