The Afghan Taliban have released a statement on the Canadian military mission in Afghanistan following the scheduled withdrawal of Canadian troops from combat operations on July 7. Entitled “Remarks of the Spokesman of the Islamic Emirate Regarding the Withdrawal of the Canadian Invading Forces from Afghanistan,” the statement by Qari Mohammad Yusuf Ahmadi appeared on numerous jihadi website forums (Ansar1.info, July 8).

Since the arrival in Afghanistan of special operations forces in December 2001, the Canadian contingent has fought numerous battles against Taliban forces, losing 157 soldiers during their deployment, the majority to improvised explosive devices.  The current force of 2,850 soldiers will be replaced by a team of 950 troops assigned to train the Afghanistan National Army (ANA).

According to the Taliban spokesman, the Canadians “sustained heavy casualties in various attacks at the hands of mujahideen, compelling them to withdraw their troops from Afghanistan… In addition to the life loss, the heavy economic burden of the war dawned on the people and members of the Parliament of Canada to press the ruling regime in Canada to withdraw their forces.”

Contrary to Qari Yusuf’s claims, there was majority support in Parliament for the mission, which started under a Liberal Party government and continued under the current Conservative Party government. Opposition did come from the separatist Bloc Québécois and the socialist New Democratic Party of Canada, which has called for immediate withdrawal of Canadian troops from Afghanistan since 2006.

Qari Yusuf suggests Canadians ask their government and military just what has been accomplished in Afghanistan other than immense loss of life and equipment. If a satisfactory answer cannot be provided, Canadians should intervene to prevent the deployment of the new training mission. The Taliban spokesman warns that “the new mission of Canada under the name of military training will bring in only losses and bitter outcome like the precedent of their war mission…”

Several days after the statement, the deputy commander of the new Canadian training mission, Colonel Peter Dawe, appeared to dampen expectations of the mission in an interview with Canadian state television: “I have concerns. Nobody in the mission is naive. We’re optimistic but not naive. …We’re not in the business of making guarantees. We certainly won’t guarantee success… Afghans don’t need to be taught how to fight. They just need to be given the critical enablers” (CBC, July 10). 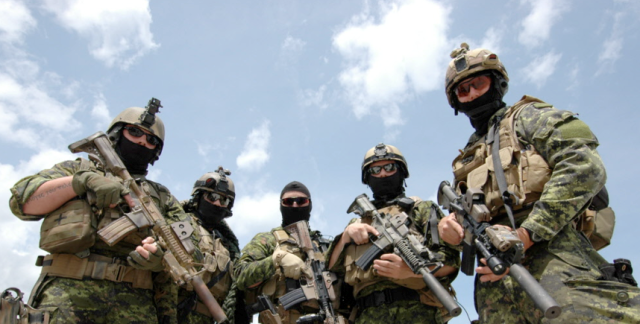 The Canadian contribution to the Afghanistan campaign began with the deployment in October, 2001 of some 40 members of the highly secretive Joint Task Force 2 (JTF2) special operations group as part of the American-led Task-Force KBAR. In 2004, the Canadian unit was awarded the Presidential Unit Citation by the United States for its work in Afghanistan. It was the second time the award was given to a Canadian unit, having been won in the Korean War at the Battle of Kapyong by the 2nd Battalion of the Princess Patricia’s Canadian Light Infantry (PPCLI).

Over the last ten years, the Canadian military has deployed artillery, armor, special operations units and (in rotation) all three infantry regiments of the regular army, supported by volunteers from Canada’s reserve units. The air arm of the Canadian military mission (Task Force Silver Dart) provided support with helicopters, Heron unmanned aerial vehicles and CC-130 Hercules tactical airlift transports.  In a deployment originally scheduled to last only until October 2003, Canadian troops were stationed at Kabul from 2002 until 2006, when they redeployed to the volatile Kandahar Province of Afghanistan. On July 7, command of their sector was handed over to the U.S. military.

This article was originally published in the July 14, 2011 issue of the Jamestown Foundation’s Terrorism Monitor.