Following a short but dramatic trial, three self-proclaimed al-Qaeda members have been sentenced to death in Mauritania for their role in the murder of four French tourists in December 2007. The attack became known in Mauritania as “the Aleg case,” named after the small town near the murder site, about 250 km southwest of the capital of Nouakchott (see Terrorism Focus, January 9, 2008). 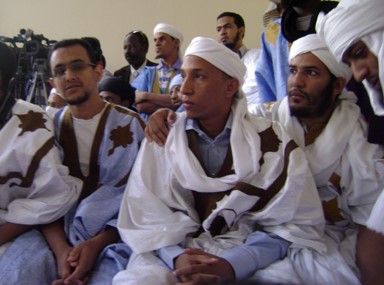 A total of twelve men were tried for the murders; four in absentia, with the other eight kept within a wooden cage in the Nouakchott courtroom. Only three were accused of the actual murders; the others were charged with complicity. Spectators attending the trial had to pick their way through a phalanx of riot police deployed on the court steps, submit to three separate body searches and give up any bags or cell phones before entry. Women wearing veils were prevented from entering. Foreign reporters, however, were encouraged to attend and report the proceedings. The charges faced by the main accused, Maarouf Ould Haiba, Sida Ould Sidna and Mohamed Ould Chabarnou, included terrorism, premeditated murder and rebellion against the state. After the murders, Sidna and Chabarnou fled to Guinea-Bissau, where they were tracked and arrested by local police with the assistance of French intelligence services. Haiba was arrested soon afterwards in Nouakchott (Ennahar [Algiers], May 23, 2010).

Though the three principal suspects (aged 22 to 29) insisted they were not responsible for the murders, they loudly proclaimed their membership in al-Qaeda, admitted their participation in al-Qaeda training camps and insisted their confessions had been extracted through torture. By demanding the death sentence, the prosecution put its own case in jeopardy. Important ballistics evidence obtained by French experts could not be used when Paris invoked its policy of refusing to allow experts to give evidence in capital cases. Other than that, there were no witnesses and few substantial exhibits in the three-day trial (al-Arabiya, May 25, 2010; Jeune Afrique, June 5, 2010; AFP, May 26, 2010).

In court, the three accused taunted the judges with accusations of apostasy and proclaimed that it would have been a great honor to have killed the victims – if they had done it. Charbarnou even sang the Muezzin’s call to prayer during the proceedings (AFP, May 24, 2010; Walf Fadjiri [Dakar], May 26, 2010; Jeune Afrique, June 5, 2010). The accused said they were “Soldiers of Allah,” and were determined to continue their war against France, the United States and their acolytes (Casafree.com [Morocco], June 5, 2010). Sidi Ould Sidna said he was unconcerned about his fate. “The court is only applying criminal law, not Islamic law. That’s why we’re not concerned by these decisions” (AP, May 25, 2010).

The sentences came down on May 25. The three principals in the case received the death sentences sought by the prosecutor, while the others received acquittals or short sentences ranging from six months to three years. After the death sentences had been issued, the condemned men continued their political theater, beginning with Maarouf Ould Haiba, who shouted at the judge, “God is Great! You’ll see, dog, we’ll go to paradise!” Haiba then held up a black cloth inscribed with the Muslim profession of faith in white letters – “There is no God but God and Muhammad is his Messenger.” Sidi Ould Sidna turned to the five French citizens in attendance and drew his fingers across his throat in the universal slaughtering gesture while Mohamed Ould Chabarnou shouted, “Between us and the France of Sarkozy is the sword!” (Dawn [Karachi], May 26, 2010; Jeune Afrique, June 5, 2010).

The death sentence was last applied in Mauritania in 1987, when three Black African officers were executed for planning a coup against the Bidan Moor-dominated government. While Mauritania has been considering abolition of the death penalty, death by both hanging and firing squad remain legal methods of execution (Le Quotidien de Nouackchott, May 26, 2010). All death sentences since 1987 have been commuted to life imprisonment, but there are indications the government may press for capital penalties in this case. The murders resulted in significant economic damage to Mauritania when the Paris-Dakar rally was canceled as a result of the attack. The country’s important tourism sector collapsed soon after. France, the former colonial power, also remains an important economic and political partner of Mauritania. Lawyers for the defendants filed an appeal the day after sentencing, citing the prosecution’s description of the ballistics evidence during the trial without having this evidence formally entered into the record (APA, May 26, 2010; AFP, May 26, 2010).

This article first appeared in the June 10, 2010 issue of the Jamestown Foundation’s Terrorism Monitor.