A handful of unconfirmed reports from Libya have cited the presence of Darfur rebels in the ranks of the African mercenaries defending the regime of President Mu’ammar Qaddafi (al-Intibaha [Khartoum], February 21, 2011; Reuters, February 22, 2011). A spokesman for the Sudanese Ministry of Foreign Affairs told a press gathering that authorities were investigating the claims (Sudan Tribune, February 22, 2011). Darfur has strong historical ties to Libya, its northern neighbor, and Qaddafi has played a large role in hosting peace talks and encouraging the unification of Darfur’s many rebel groups. Perhaps mindful of his own future, Qaddafi has also been one of the main defenders of Sudanese president Omar al-Bashir from possible arrest and prosecution by the International Criminal Court (ICC) for war crimes in Darfur, using his influence in the African Union to pressure other African leaders on the issue, many of whom are also mindful of the precedent that could be set by al-Bashir’s prosecution. 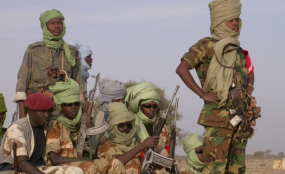 Officials of the Justice and Equality Movement (JEM), the strongest of Darfur’s rebel movements, reacted with anger to the allegations, saying JEM has no fighters in Libya, has no interest in interfering with Libyan affairs and will hold Khartoum responsible for any harm that comes to the thousands of Sudanese citizens working in Libya (Sudan Tribune, February 22, 2011). When a Sudanese Foreign Ministry spokesman later announced that his ministry now had proof (as of yet undisclosed) that Darfur rebels were engaged in the fighting in Libya, JEM official al-Tahir al-Feki responded: “These allegations are very offensive and show no sensitivity towards the hundreds of thousands of Sudanese who reside in Libya who will be put in jeopardy as being seen as mercenaries or taking sides. To say that there are JEM fighters in Libya fighting for Gaddafi, this is just provoking the Libyans to go after all the Sudanese” (Reuters, February 23, 2011). There are an estimated half million Sudanese living in Libya and Sudanese officials say they are working on an evacuation plan should that prove necessary (SUNA [Khartoum], February 21, 2011).

JEM’s leader, Dr. Khalil Ibrahim, has been harbored in Libya since May 2010, when he was refused re-entry to Chad, JEM’s former base (Sudan Tribune, May 19, 2010). The relocation was the result of a peace agreement between Chad and Sudan that ended a long-running proxy war across the Chad-Sudan border (see Terrorism Monitor Brief, October 28, 2010). Khartoum was extremely displeased with the Libyan decision to offer the JEM leader refuge and it would not be surprising to see Sudanese officials taking the opportunity to try and discredit JEM by linking its fighters to the mercenaries firing on civilians in Libya.

There is something of a precedent here; JEM rebels were active in the defense of their Chadian host when Chadian rebels operating out of Darfur attacked the Chadian capital of N’Djamena in February 2008. There were different circumstances at work, however; JEM stood to lose their Chadian bases if a Sudanese-backed faction took power in Sudan. There were also tribal ties between the Chadian leadership and the leadership of JEM, both of which are dominated by members of the cross-border Zaghawa tribe. In this context, however, it should also be mentioned that the Chadian rebels were Zaghawa as well (see Militant Leadership Monitor, July 30, 2010). A number of Zaghawa are believed to have served in Qaddafi’s Islamic Legion in the 1990s.

As the protesters grow in strength, suspected mercenaries are being dealt summary justice in the streets, often through hanging. Growing numbers of suspected mercenaries are also being detained by revolutionary committees, including alleged gunmen from Chad, Niger and Sudan (Reuters, February 24). Libya has a substantial black African work force and student population that are likely to come under suspicion in the chaotic events engulfing that nation. As mercenaries in Libya come to realize they are both expendable and unlikely to be paid, they will likely use violent and unpredictable means to extricate themselves from the situation.

The reported use of mercenaries in a desperate attempt by Qaddafi’s regime to retain power in Libya is threatening to blow up into a pan-African scandal. It is difficult to believe that gunmen with military experience were hired and flown out of various African nations without the knowledge of security services in those countries, suggesting some African governments have cooperated with the plan or at the very least looked the other way. The issue has been raised in the parliaments of Kenya and Zimbabwe, with the defense minister of the latter nation skirting the question by saying he had “no mandate in my duty as Minister of Defense to investigate activities happening in another African country” (News Day [Harare], February 23, 2011; Daily Nation [Nairobi], February 23, 2011).

This article first appeared in the February 24, 2011 issue of the Jamestown Foundation’s Terrorism Monitor.