Amidst new political turmoil in Egypt, the investigation continues into the extent of the radical Islamist network disrupted by an October 24 police raid on the militants’ armory in the Cairo suburb of Madinat Nasr. [1] A number of those arrested during the Madinat Nasr raid or as a result of subsequent investigations into the cell are experienced jihadists, many with connections to Dr. Ayman al-Zawahiri’s Egyptian Islamic Jihad (EIJ), which formally merged with al-Qaeda in 2001. Others possess military experience and may have been prepared to turn their knowledge of arms and tactics against the post-revolutionary Egyptian state, though some of the detainees claim the Madinat Nasr cell was directed primarily at running Libyan arms to Islamist groups fighting the Assad regime in Syria. 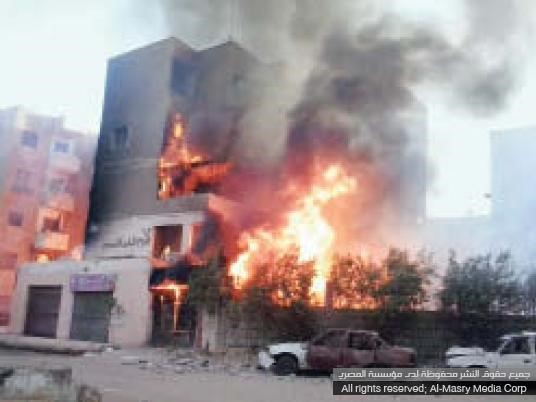 Fire that followed a bomb explosion during the raid on a Madinat Nasr building.

Here, then, is a short look at the profiles of some of the major figures arrested or being sought in connection with the raid on the Madinat Nasr cell:

Shaykh Adil Awad Shahtu: A former leader of the Egyptian Islamic Jihad, Shahtu was arrested on charges of establishing and financing the Madinat Nasr cell (Dar al-Hayat, October 31, 2012). Shahtu, a leading member of EIJ, was imprisoned in Egypt in 1991 following his return from three years in Afghanistan and was not released until March, 2011 after the fall of Hosni Mubarak. Shahtu was one of the leaders of the September 11 protest at the U.S. embassy in Cairo. The Interior Ministry reported that Shahtu was arrested while trying to slip into Libya with a large quantity of cash in different currencies (al-Hayat, November 1, 2012).

Shahtu is a vocal opponent of the democracy that brought the Muslim Brotherhood to power in Egypt: “I oppose democracy because it is not the faith of the Muslims, but the faith of the Jews and Christians. Simply put, democracy means the rule of the people itself over itself… According to Islam, it is forbidden for people to rule and to legislate laws, as Allah alone is ruler.” In the shaykh’s elitist interpretation of Islamic rule, “commoners, such as workers and fellahin [Egypt’s traditional peasant class]” would be barred from participating in the Shura (consultative council) that advises the ruler. Shahtu has warned that “if the [Coptic] Christians make problems for the Muslims, I will exterminate you,” as well as insisting on a shutdown of the tourism industry and a ban on all the arts (Roz Al-Yousef (Egypt), August 13, 2011).

Since his arrest, Shahtu has maintained the Madinat Nasr cell was seeking only to support the revolution in Syria: “We disagree with the Muslim Brotherhood, but we do not consider its members as infidels. We were not targeting any Egyptian or Egyptian installations” (al-Hayat, November 4).

Wa’il Abd-al-Rahman – Identified as the “prime suspect” in the Madinat Nasr cell and described as a takfiri (a Muslim who accuses other Muslims of apostasy) and former member of the EIJ, al-Rahman was reported to have been arrested two months earlier and sentenced to jail on charges of seeking to overthrow the regime “and of judging the ruler [al-Mursi] as an infidel.” Police claim to have found gunpowder and other materials for manufacturing explosives in his house (al-Hayat, October 27, 2012; al-Tahrir [Cairo], October 31, 2012).

Muhammad Jamal al-Kashif (a.k.a. Abu-Ahmad) – A former EIJ leader released after the revolution, al-Kashif’s present location is unknown. Egyptian security services report that al-Kashif has been an active al-Qaeda operative in Yemen and Libya and had been given orders by Dr. al-Zawahiri to lead terrorist operations in Egypt and Libya (al-Dustur [Cairo], October 28, 2012; al-Hayat, October 27, 2012).

Karim Isam Ahmad Azzazi – Forty-years-old, Karim Isam reportedly blew himself up during the raid (al-Hayat, October 31, 2012). According to the autopsy report, the beardless suspect died of burns and showed no trace of bullets (al-Tahrir [Cairo], October 31, 2012). It is Karim Isam who allegedly rented the ground floor of a 15-storey property in Madinat Nasr and undertook a number of renovations, including the installation of an iron door and the creation of a private parking area from which visitors to the site could enter the building unobserved (al-Wafd [Cairo], October 28, 2012).

Karim Ahmad al-Badawi (a.k.a. Abu Hazim) – A 53-year-old Egyptian from Cairo Governorate who is reported to have died during the raid, possibly as a result of being shot by police while fleeing (al-Akhbar, October 26, 2012). The exact circumstances of his fate remain unclear, largely due to considerable confusion in the local media between Karim Ahmad al-Badawi and Karim Isam Ahmad Azzazi (see above).

Rami Ahmad Muhammad al-Mallah – A former radar specialist and captain in the Egyptian Army before resigning a short time ago following his decision to express his Islamist allegiance by growing a beard. An alleged leader of the Madinat Nasr cell, al-Mallah was arrested in downtown Cairo a day after the Madinat Nasr raid while trying to obtain a tourist visa to Turkey as part of a scheme to sneak into Syria (al-Hayat, October 28, 2012; November 3, 2012).

Muhamad Sa’id Merghani – The Tunisian suspect is believed to be an expert in the use of explosives and is thought to have taken part in the attack on the U.S. consulate in Benghazi (al-Jumhariyah [Cairo], October 29, 2012; al-Shuruq al-Jadid [Cairo], October 31, 2012). During his interrogation, Muhammad Sa’id admitted to being a member of the Tunisian Muslim Brotherhood and claimed that he was trying to make his way to Syria to join the insurgency (al-Hayat, November 4, 2012).  Egypt’s security services have asked for Tunisian assistance in investigating this aspect of the case.

Tarik Abu al-Azm – A former Egyptian Army officer who has faced criminal charges before, al-Azm claims he was only friends with the cell leader and has no interest in politics.

Nasr Hani Hasan Rashid – Picked up two weeks after the raid, Nasr Hani is alleged to have returned from Libya at the beginning of November to carry out terrorist operations after receiving military training from al-Qaeda elements in Libya (al-Shuruq al-Jadid [Cairo], November 7, 2012).

Other suspected cell members either detained in the raid or on the run include Tarik Yahya Hulayl, Muhammad Salman Sulayman, Nabil Abd al-Moneim and Amr al-Rifa’i Surur.

Information available on the suspects so far suggests the growth of an Islamist network connecting militants from Tunisia, Libya, Egypt and Syria. As Egypt enters a new political and constitutional crisis following the assumption of extraordinary powers by President Muhammad al-Mursi there will be new opportunities for Egypt’s Salafi-Jihadi community to press its agenda through a return to the armed conflict that raged between Islamists and Egyptian authorities in the 1990s.