With ECOWAS and the African Union now in agreement over the formation of a force of 3,300 African peacekeepers drawn from both ECOWAS and non-ECOWAS nations, many nations whose support would be required for the success of such an option have recently cooled to this plan, while others, such as Algeria, continue to maintain a reserved position. An apparent victory by one of the Islamist factions occupying northern Mali over a well-armed Tuareg rebel militia that has offered to join counter-terrorist operations has not inspired confidence in the ultimate success of the under-size AU force. [1] 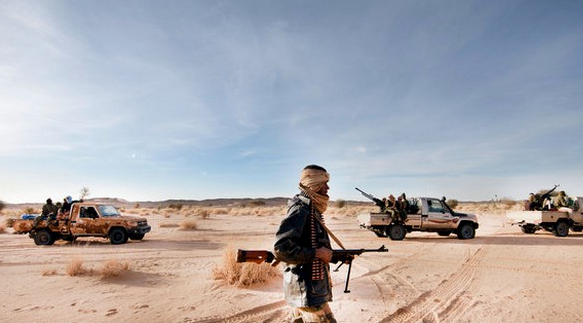 MNLA on the Move (Andy Morgan)

Though January 2013 had long been suggested as the starting date of an international military intervention, UN Special Envoy for the Sahel Region, former Italian premier Romano Prodi, said during a visit to Rabat that it would be September, 2013 before an intervention could begin (AFP, November 20, 2012). With the intervention receding into the distant future, many refugees from the fighting in northern Mali are returning to their homes, unhappy with Islamist rule but unwilling to wait nearly a year or more for assistance in driving the Islamists out of the region.

Nigeria’s decision to pledge only 600 troops to the projected force of 3300 would seem to imperil a project that was designed to be built around a larger Nigerian core (Daily Trust, [Lagos], November 22, 2012). Chad, a non-ECOWAS country, has apparently agreed to join the intervention force, but the composition of the rest of the force has yet to be revealed (L’Indépendant [Bamako], November 12, 2012). The EU has dampened earlier expectations that European troops might supplement African forces in the mission. According to EU Counterterrorism Coordinator Gilles de Kerchove: “The European Council held on 18 and 19 October came out in favor of a military mission to train the Malian Army. There is no question of European intervention as such. It is up to Mali to win the north back” (Le Monde, November 12, 2012).

Algerian Foreign Minister Mourad Medelci reminded concerned parties that: “Algeria is not convinced that an exclusively military solution would bring peace and unity to Mali. Our wish is to convince our partners that the military path must be oriented toward the fight against terrorism. It must be accompanied by a political process in the form of a dialogue between the Malian protagonists” (Jeune Afrique, November 14, 2012). In neighboring Mauritania, national assembly president Messaoud Ould Boulkheir warned of the fallout from an intervention: “[Mali] is like a volcano about to erupt… If this volcano awakens, it will dump incandescent ashes over its neighbors” (AFP, November 12, 2012). A November 14 communiqué from the Tunisian president’s office warned against an “uncalculated military intervention in Mali” that could turn the Maghreb into a “hotbed of tension” and threaten the security of the Maghreb states (Tunisian Press Agency, November 15, 2012).

Libya delivered its opinion on a military intervention in Mali via Mahfouth Rahim, director in charge of African affairs at the Libyan Foreign Ministry: “We Libyans believe that we should not focus on military solutions at the moment to avert escalation which might lead us to what happened in Afghanistan… The military solution would exacerbate the crisis as the Tuareg rebels and other Islamist groups would be forced to seek refuge in other countries such as Libya” (PANA Online [Dakar], November 14, 2012).

Former Malian prime minister Ibrahim Boubacar Keita (1994-2000, parliamentary speaker, 2002-2007) is among those who have urged caution, noting that the Malian army needs time to rebuild to counter tactics likely to be used by the Islamist militants: “The population will be used as a human shield. Hence the need for extreme care in planning and skill in implementing an intervention. Military logistics and intelligence will be crucial with a view to knowing exactly whom we are dealing with, before saying: “Let’s go in, let’s go in!” (Le Monde, November 4, 2012).

In the north, meanwhile, the defeat of the secular Tuareg rebel Mouvement National de Libération de l’Azawad (MNLA) by Islamist forces demonstrated the latter’s military strength and the readiness of the Islamist groups to cooperate in the field. During what has been described as a MNLA attempt to retake Gao, fighting broke out with forces belonging to the Islamist Movement for Unity and Jihad in West Africa (MUJWA) near Asango on November 16. Asongo is 120 miles west of Menaka, where the MNLA was attempting to create a base for counterterrorist operations (Jeune Afrique, November 18, 2012; AFP, November 20, 2012). Locals suggested that many of those resisting the MUJWA attack in Asongo were not MNLA members, including local Tuareg political leader, Alwabegat ag Slakatou and six of his men who were reported among the dead (AFP, November 20, 2012).

AQIM was reported to have sent some 300 reinforcements to Gao from Timbuktu, roughly 185 miles to the west (AFP, November 17; Jeune Afrique, November 18, 2012). The reinforcements were said to belong to AQIM’s Katibat al-Mulathamin (Veiled Brigade) and the Katibat Osama bin Laden, led by Abu Walid Sahrawi.

Though MNLA spokesmen described only light casualties in the clash and described the action as “an initial success,” reports from the area and Malian security sources described dozens killed in “a real bloodbath” (Tout sur l’Algérie, November 17; AFP, November 20, 2012). Both sides presented casualty figures that were likely inflated, with the MNLA claiming 65 AQIM and MUJWA fighters killed, while MUJWA announced the death of over 100 members of the MNLA (AFP, November 20, 2012). The MNLA’s chief-of-staff, Machkanani ag Balla, suffered a serious wound while leading his men in the fight. MUJWA spokesman Walid Abu Sahrawi said the movement was dedicated to destroying the MNLA: “In Azawad, we are going to pursue the MNLA wherever they may still be found. We control the situation” (Jeune Afrique, November 18, 2012). Northern Mali’s three northern provinces are now conveniently divided between the three Islamist movements – Gao in MUJWA, Timbuktu in AQIM and Ansar al-Din in Kidal. The MNLA was expelled from Gao in June and now operates in rural areas only.

According to MNLA spokesman Hama ag Sid Ahmed, MUJWA forces setting up new bases on the outskirts of Gao have been joined by AQIM commander Mokhtar Belmokhtar (who appears to be at odds lately with the rest of the AQIM leadership – see Terrorism Monitor Brief, November 15, 2012) and various Pakistanis, Egyptians and Moroccans (Tout sur l’Algérie, November 16, 2012).

A spokesman for the Islamist Tuareg group Ansar al-Din claimed that movement leader Iyad ag Ghali had tried to prevent the fighting between MUJWA and the MNLA and remained on the sidelines when the conflict began. In Ouagadougou, Burkina Faso President Blaise Compaoré is now holding joint talks with Ansar al-Din and the MNLA, rather than meet the two rebel Tuareg groups separately, as had been the case so far (AFP, November 16, 2012). According to an Ansar al-Din spokesman, if talks go the right way, “one can foresee ways and means in which one can get rid of terrorism, drug-trafficking and foreign groups” (AFP, November 14, 2012; PANA Online [Dakar], November 18, 2012).