Afghanistan’s Taliban movement has reacted to Washington’s announcement that it would begin a phased military withdrawal from Afghanistan, beginning with the withdrawal of 10,000 troops by the end of the year. In an official statement issued in the name of the Islamic Emirate of Afghanistan, the Taliban described the announcement as an attempt to deceive both the American and Afghan people by its failure to acknowledge an alleged U.S. plan to build permanent military bases with American garrisons in Afghanistan. [1] 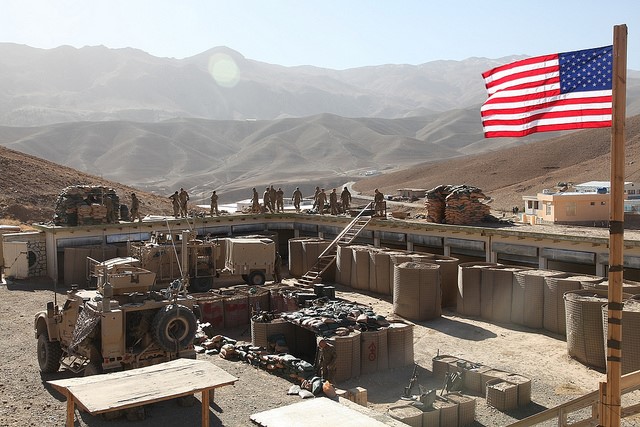 The statement claims that President Obama “and his war mongers” have no intention of bringing the American occupation of Afghanistan to an end. In the Taliban’s eyes, the suggestion that the Afghan police and army can take over security duties from the Coalition “holds no significance,” as most of the police and army “are drug addicts” and are considered by Afghans as “enemies of their nation and religion”: “They perform their duty only to spread vice and corruption. They can neither fulfill the demands of the Afghans nor help the Pentagon and CIA to achieve their goals.”

The Taliban statement goes on to describe the American “surge” as a strategic failure that has only increased American loss of life and equipment: “They have not gained progress in the battlefield, nor can they bring forth any proofs of this progress… persecution of people and the destruction of people’s homes and farms to protect themselves cannot be called victory or progress by any sound mind.”

The statement concludes by warning American taxpayers that their money is “still being wasted” on the prosecution of the war or by finding its way into “the pockets of officials in the corrupt Kabul regime.”

Despite recent talk of new negotiations between the Taliban and the Karzai regime and its American sponsors, the two sides appear to be far apart. While Washington demands a renunciation of violence, the end of cooperation with al-Qaeda and support for the Afghan constitution, Taliban leaders continue to call for an immediate and complete withdrawal of foreign troops and the replacement of the Karzai “stooge” regime in Kabul.

Some in the U.S. administration still seem to be working on the assumption that Afghanistan’s Taliban movement is little more than a subordinate element of al-Qaeda. According to recent Senate testimony presented by U.S. Secretary of State Hillary Clinton: “With (Osama) Bin Laden dead and al-Qaeda’s remaining leadership under enormous pressure, the choice facing the Taliban is clear: be part of Afghanistan’s future or face unrelenting assault” (AFP, June 23).

Rumors of negotiations regarding permanent U.S. military bases in Afghanistan have been dismissed by Secretary of State Clinton and a number of other senior officials. A Karzai government spokesman also denied the report: “It has not been officially discussed yet… We have not proposed that the U.S.A. establish permanent bases in Afghanistan” (Tolo TV [Kabul], June 20).

Taliban fears of a permanent American military presence in Afghanistan are based on a June 13 Guardian article which claimed, according to unnamed “American officials,” that quiet but difficult negotiations are underway to provide for a continued American military presence beyond 2014 at one or more of five existing bases in Afghanistan. One of the sticking points allegedly centers on their possible use in operations against neighboring countries such as Pakistan and Iran. According to the Guardian’s sources, American denials are a matter of interpretation; such bases would not necessarily be “permanent,” and though American “combat troops” would not be deployed, military “advisors” routinely accompany their trainees on combat missions.

This article first appeared in the July 1, 2011 issue of the Jamestown Foundation’s Terrorism Monitor.