After decades of discouraging the practice of Sufi Islam, Algerian authorities are now turning to Sufism as an ideological weapon in their struggle against Salafi-style Islamist militancy. Roughly 1.5 million of Algeria’s 34 million citizens are active adherents of Sufism. 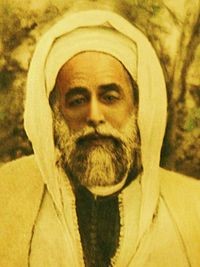 This turnaround in the official approach to Islam in Algeria was highly visible in a week-long Alawi Sufi festival held in Mostaganem in July (Mostaganem is 250 km west of Algiers, well distant from the strongholds of the Salafist militants in eastern Algeria). Organizers said the event was dedicated to “encouraging people to return to traditional Islam, the Islam of tolerance and open-mindedness” (Al-Sharq al-Awsat, July 28). One speaker noted that there are more than 170 verses in the Quran that describe the strategic value of tolerance and reconciliation for Muslims. Some 5,000 Alawi adherents from Europe, North Africa, the Americas, Asia and the Middle East assembled at the gathering, which enjoyed the personal sponsorship of President Abdelaziz Bouteflika.

Shaykh Ahmad al-Alawi (1869-1934), a native of Mostaganem, established his own order in 1914 as a branch of the Shadhiliyya tariqa (spiritual path). The Shaykh addressed the problem of reconciling modernity and Islam and was well known for his tolerant approach to Christianity. The Alawiyya order spread to France, the Levant and other parts of North Africa. The current leader of the Alawis is Shaykh Adlan Khalid Ben Tounis, a writer and lecturer on Islamic topics.

The Alawis are one of a number of Sufi orders in Algeria, all of which suffered official disapproval after independence as the government advocated a type of reform Islam closer to Salafism. The radicalization of Algerian Islam in the 1980s led to physical attacks on Sufi shrines and their guardians.

The official view of Sufism has undergone a radical change, however. The government has created a radio and television station to propagate Sufism in Algeria and Sufi leaders are also encouraged to play a greater role in social affairs. The once powerful Tijaniyya order was rehabilitated after the post-independence government tried to eliminate it for its “pro-colonial” position during French rule.

The schism between Salafists and Sufis is longstanding and is based on Salafist objections to pilgrimage to the tombs of saints and requests for their intercession with God. Salafis call such practices “innovation,” “polytheism” and “worship of the dead.” Sufis and Salafists are engaged in active fighting in Somalia following a number of incidents in which the Salafist al-Shabaab movement destroyed important Sufi shrines and tombs.