At least 45 people were killed and over 80 wounded in a May 1 bombing of the Abdallah Shideye Mosque in Mogadishu’s Bakara market. The mosque and the market are currently controlled by the radical al-Shabaab Islamist movement. The next day a hand grenade was thrown into a Shabaab-controlled mosque in the southern port of Kismayo. One person was killed and seven injured, though the blast missed senior al-Shabaab officials who were still on their way to the mosque (Shabelle Media Network, May 2). Days earlier, a landmine was set off just outside the Shabaab-controlled Abu Hureyra mosque in the Bakara market, killing one and injuring eight (Garowe Online, May 1). 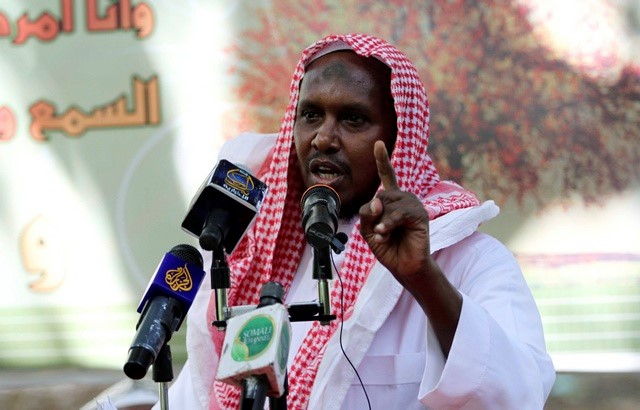 Two to three explosions occurred simultaneously within the Abdallah Shideye mosque as some 800 worshippers were gathering for noon prayers. Among those injured was a senior al-Shabaab official (and the possible target of the bombing), Shaykh Fu’ad Muhammad Qalaf “Shangole,” who described the incident:

While we were in the middle of our lesson and it was near prayer time, three explosions happened, one after the other went off, and I saw the chair I was sitting on fly across the mosque. I saw my white thawb [an ankle-length cotton garment] was red with blood and I couldn’t tell where the blood was coming from. When I opened my eyes, I saw that many people were in pain and that many others had been martyred (al-Qimmah, May 8).

Al-Shabaab spokesman Shaykh Ali Mahmud Raage (a.k.a. Shaykh Ali Dheere) insisted “foreign mercenaries” were responsible for the attack (Radio Gaalkacyo, May 2). Shaykh Ali Muhammad Husayn, the Shabaab governor of Banadir region (which includes Mogadishu), accused the Transitional Federal Government (TFG) of carrying out the bombings, vowing immediate revenge (Voice of Mudug Radio, May 2). The shaykh also said the movement would improve security in mosques and other public places, describing the bombing as “an unforgettable lesson” (Shabelle Media Network, May 2).

Eventually al-Shabaab leaders agreed the explosions were the work of American mercenaries working for private military contractors Blackwater (now Xe Services LLC). According to Shaykh Fu’ad Muhammad Qalaf, Blackwater personnel had arrived in Somalia two weeks earlier and were involved in training “apostate” forces at the Halane military base near Mogadishu airport, currently used by African Union peacekeepers fighting on the side of the TFG (al-Qimmah, May 1; May 8; Garowe Online, May 4). Al-Shabaab leaders alleged that Blackwater operatives had been responsible for similar mosque bombings in Iraq and Afghanistan.

Shaykh Ali Mahmud Raage warned of the arrival of “Blackwater mercenaries” last January. “We have discovered that U.S. agencies are going to launch suicide bombings in public places in Mogadishu. They have tried it in Algeria, Pakistan and Afghanistan… They want to target Bakara Market and mosques, then use that to malign us.” The shaykh told tribal elders that Blackwater/Xe was recruiting locals to help carry out a bombing campaign (Dayniile, January 11; Press TV, January 12). In March, the shaykh claimed private U.S. contractors such as Blackwater/Xe were responsible for a wave of assassinations of Shabaab leaders (al-Jazeera, March 10)  The Shabaab spokesman was quick to remind reporters of his earlier warning after the attack on the Abdallah Shideye Mosque (Garowe Online, May 1).

The introduction of mosque bombings to the Somali conflict has shocked many Somalis, who almost reflexively look beyond their own culture for an explanation of this phenomenon, much as they did with the earlier introduction of suicide bombings by al-Shabaab.  A TFG spokesman described the mosque attacks as a “new foreign barbaric phenomena”; leaders of both al-Shabaab’s rival Hizb al-Islam militia and the pro-government Ahlu Sunnah wa’l-Jama’a (ASJ) militia alleged a foreign origin for the attacks (Garowe Online, May 3). With no claim of responsibility, there is still a wide range of suspects, including the Sufi ASJ, which has suffered from al-Shabaab’s continuing destruction of Sufi shrines and the tombs of revered Sufi shaykhs (see Terrorism Monitor, April 1).

Xe owner Erik Prince urged the U.S. government last January to deploy private military contractors to fight “terrorists” in Somalia, Yemen, Nigeria and Saudi Arabia (The Nation, May 3; Times Online, May 5). Rumors of Blackwater/Xe’s presence and activities are already common currency in Pakistan and now appear to be sweeping Somalia as culprits are sought in a vicious new stage of the continuing transformation of Somalia’s civil war from clan-based warfare to sectarian struggle.

This article first appeared in the May 13, 2010 issue of the Jamestown Foundation’s Terrorism Monitor