Ugandan president Yoweri Museveni became the first foreign head of state to visit Somalia in over 20 years when he made a three hour visit to Mogadishu on November 28. Though the president’s visit was a carefully concealed secret until his arrival, it served as confirmation of Museveni’s continuing commitment to the political stabilization of Somalia and the elimination of radical Islamist groups such as al-Shabaab and Hizb al-Islam. Ugandan troops form the majority of the African Union’s peacekeeping force in Somalia, the African Union Mission in Somalia (AMISOM). Though many other nations have pledged military support to the mission, only Burundi has actually sent troops to support the Ugandans. 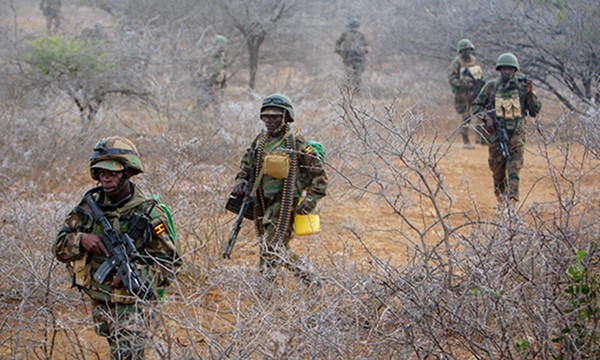 With Uganda and Burundi engaged in frontline combat to preserve the imperiled TFG, Museveni was critical to the point of sarcasm in commenting on what he described as a lack of seriousness regarding Somali security issues on the part of the international community, which maintains an expensive deployment of warships off the Somali coast that has had little impact on piracy and virtually no impact on the internal struggle for Somalia:

“We want more troops from Uganda or from anywhere in Africa. Uganda is a country of 33 million people, so we could mobilize three million people. But who will pay for it? International support is not enough. [The international community] don’t take the Somali problem seriously. They are busy enjoying themselves in the ocean, having a nice time in the ocean. Do you know how much money they spend in the ocean? The pirates who go to the ocean to steal from ships come from land. Have you heard that Somalis have become aquatic?”  (Daily Monitor, November 29; New Vision [Kampala], November 29).

AMISOM troops have assumed the burden of defending the TFG from Islamist assaults. A continuing effort to train the TFG’s own military force has been largely unsuccessful with a lack of discipline and resources cited as the main problems. Somali information minister Abdirahman Omar Osman recently admitted that the TFG’s failure to make regular payments to its troops and the appeal of al-Shabaab’s Islamic propaganda have led to defections from TFG forces (Daily Monitor, November 7). The TFG mandate expires in August 2011, leaving an uncertain future for Somalia.

Though the Islamists continue to control most of southern Somalia, Ugandan Colonel Michael Ondoga says progress has been made in recent months in Mogadishu, where AMISOM troops have expanded the area under the control of the TFG to roughly 50% of the city, the largest area secured by the peacekeeping force since its deployment three years ago. The next step is to take Mogadishu’s Bakara Market (currently in the hands of al-Shabaab), but further offensives are hampered by insufficient forces to consolidate and hold positions already taken (New Vision, November 29). The market was the scene of several days of heavy fighting and shelling that coincided with Museveni’s visit (Garowe Online, November 30).

Ugandan diplomats have argued with the UN Security Council (whose chairmanship Uganda will relinquish next month) that an enhanced AMISOM force of 20,000 men would be cheaper and more effective in dealing with piracy than a varied naval presence that lacks a unified leadership (New Vision, November 14). Burundi’s President Pierre Nkurunziza has also called for reinforcements and a more aggressive mandate for AMISOM (Garowe Online, November 19). Burundi has just sent an additional battalion to AMISOM, bringing the peacekeeping force up to the original projected strength of 8,000 men for the first time (Daily Monitor, November 26).

Museveni’s visit was not well received by Hizb al-Islam, whose spokesman Shaykh Muhammad Osman Arus claimed AMISOM was committing genocide in Mogadishu: “[Museveni] came here to witness how the Muslim people are being harmed. He must have felt pleased by the atrocities committed.” The shaykh pledged new attacks on AMISOM to demonstrate the Islamists’ displeasure (Africa Review [Nairobi], November 30).

This article first appeared in the December 2, 2010 issue of the Jamestown Foundation’s Terrorism Monitor