A new communiqué from the Saudi Arabian deputy leader of al-Qaeda in the Arabian Peninsula (AQAP), Abu Sufyan al-Azdi al-Shihri (a.k.a. Sa’id Ali Jabir al-Kathim al-Shihri), urges troops in the service of the Kingdom of Saudi Arabia to abandon their “apostate” masters and take up arms in the service of jihad (Global Islamic Media Front, November 18). 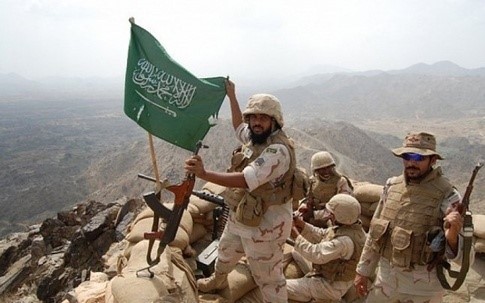 Saudi Troops on the Yemen Border

Al-Shihri was captured on the Afghanistan-Pakistan border in December 2001 and sent to the American detention camp at Guantanamo Bay in January 2002. He was released in November 2007 and repatriated to Saudi Arabia, where he completed a government-sponsored rehabilitation program. Following his graduation he immediately traveled to Yemen, where he joined AQAP, quickly becoming its deputy leader under Nasir al-Wuhayshi (a.k.a. Abu Basir), who escaped from a Yemeni prison in 2006.

The AQAP deputy commander says his advice was prepared in response to inquiries that had reached AQAP from members of the Saudi armed forces. These individuals serving the “al-Sa’ud infidel and apostate government” were unsure of whether they should remain in uniform or join the mujahideen in the “Land of Jihad and Preparation in [the Prophet] Muhammad’s Peninsula,” i.e. Yemen. Al-Shihri cites the works of scholars such as Ibn Hajar and Shaykh Ibn Taymiyah in preparing his response, as well as the works of contemporary Jordanian jihad ideologue Abu Muhammad Al-Maqdisi, the former spiritual guide of late al-Qaeda in Iraq leader Abu Musab al-Zarqawi.

Besides the apostasy of the Saudi rulers, who have allied themselves with “Jews and Crusaders,” al-Shihri also accuses the regime of promoting “moral corruption, permitting the forbidden intermingling of the two sexes and the spread of nakedness and unveiling, and the corruption of society from drugs, alcohol and other types of clear sins…”

Al-Shihri condemns the treatment of Haylah al-Qusair (a.k.a. Umm Rabbab), a rare female al-Qaeda leader who joined the organization in 2004 after her husband was killed. Since her arrest earlier this year, al-Shihri says the “shaykhs of Satan, the scholars of al-Sa’ud” have “spoiled her reputation, sitting with her, debating with her and pressuring her through her daughter Rabbab, who was shackled in chains.”

Al-Shihri also warns of the regional machinations of the Jews of Israel and the “Magian Rafidites,” a pejorative appellation for Iranian Shiites that implies both paganism and religious deviation: “Understand well that the Muslim nation may soon enter a war, the ferocity of which none but Allah knows.” According to the AQAP leader, the Jews seek to rebuild the Temple of Solomon and establish Greater Israel, but have been foiled by the Salafi-Jihadi movements in Gaza. The “Magian Rafidites” of Iran are set on seizing the holy cities of Mecca and Medina according to al-Shihri, who says “the Jews will launch a war against Iran, but the actual battleground will be al-Sham (i.e. Greater Syria, or the Levant) and the Arabian Peninsula.”

Al-Shihri instructs would-be jihadis in the armed forces to focus their attentions on targets in nearby Israel:

Openly declare your disobedience to the commands of the idolaters [i.e. the royal family] and do not direct your weapons at Muslims who have rebelled against the idolators… Rather, aid them and direct your weapons towards Israel which is only a few kilometers away from you, whose lights can be seen from Haql, an area in the north of the Arabian Peninsula. The pilots among you should seek martyrdom over the skies of Palestine, and those in the navy should point their weapons at the Jews there, earning the honor of martyrdom in the Cause of Allah.

For the soldiers of Saudi Arabia, al-Shihri offers the following advice:

• Form small cells to recruit those in the military and political fields who can aid the cause, especially “those who belong to the Air Force, or are responsible for weapons depots, are officials in the army, Interior Ministry, operations centers or media…”

• Guards of the government and royal family should emulate the example of Khalid Ahmed Showky al-Islambouli, the Egyptian military officer who played a key role in the assassination of Egyptian president Anwar Sadat in 1981.

• Employees of the Interior Ministry should gather intelligence from ministry records and pass this along to al-Qaeda.

• Avoid spilling blood unnecessarily, “even if it results in delays in attacking specified targets.”

• Imprisonment should be avoided in favor of martyrdom.

This article first appeared in the December 2, 2010 issue of the Jamestown Foundation’s Terrorism Monitor