In recent days thirty fighters from Darfur’s rebel Justice and Equality Movement (JEM) have been sentenced to death in special ad-hoc counter-terrorism tribunals created by the Sudanese government. The fighters were taken prisoner during last May’s surprising but ultimately unsuccessful JEM raid on Omdurman. After being sentenced to hang, the JEM guerrillas responded with cries of “In the name of Darfur, God is Great” and “Thanks be to God” (Sudan Tribune, July 31; Reuters, July 31). 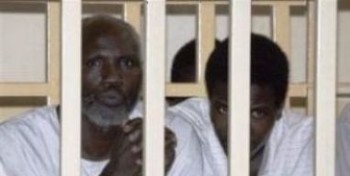 If not considered POWs, insurgent prisoners are still entitled under international law to protection from torture, confinement in secret prisons and summary execution. They may, however, be tried for treason and sedition. Sudan (unlike the United States) is a ratified signatory to the 1977 Geneva Convention Additional Protocol 1, in which section 1.4 states POW status must be given to prisoners from “armed conflicts in which peoples are fighting against colonial domination and alien occupation and against racist regimes in the exercise of their right of self-determination.” While some may argue JEM prisoners meet this definition, JEM, like the Sudan People’s Liberation Army/Movement (SPLA/M) of southern Sudan, has always styled itself it a “national liberation movement,” rather than a regional separatist movement.

The Government of South Sudan (GoSS) has urged that the JEM prisoners be pardoned. According to Yasir Arman, the SPLM Deputy Secretary General for Northern Sudan, the JEM rebels are clearly prisoners of war (Miraya FM [Khartoum], July 31). In June, the SPLM Secretary General Pagan Amum (Cabinet Affairs Minister in the Government of National Unity) also called on the government to treat the rebels as prisoners of war (Sudan Tribune, June 23). During its 22 year war with southern rebels, Khartoum routinely explained the absence of SPLA POWs by denying that any rebels had been taken prisoner.

After claiming POW status for its captured fighters, an official JEM statement declared; “Execution of Prisoners of War is a breach of the International Law and considered an act of assassination and another murder in cold blood” (Sudan Tribune, July 29). JEM spokesman Ahmad Hussein promised the movement would retaliate “at the appropriate time and place” (Afrique en Ligne, July 31). Hussein added; “This is a butchery of justice in Sudan and yet another example of [an] impotent judiciary that is under the influence of the executive branch… This proves there is no genuine judiciary in Sudan to prosecute anyone let alone perpetrators of genocide and war crimes” (Sudan Tribune, August 1).

Defense lawyers for the JEM accused, who must mount appeals in the next few days, say that the special courts are unconstitutional. Once the sentences have been ratified by an appeals court, the execution orders must then be signed by Sudanese President Omar al-Bashir, who is himself wanted by the International Criminal Court on charges of war crimes. The question is whether al-Bashir will commute the death sentences to moderate his image, or fall back on his regime’s customary recourse to quick and decisive punishment of those who challenge its authority. With JEM still operating openly in Darfur and threatening another raid on Khartoum, it will be hard for al-Bashir to resist demonstrating the regime’s willingness to ignore international opinion when it comes to matters of internal security.

This article first appeared in the August 6, 2008 issue of the Jamestown Foundation’s Terrorism Focus