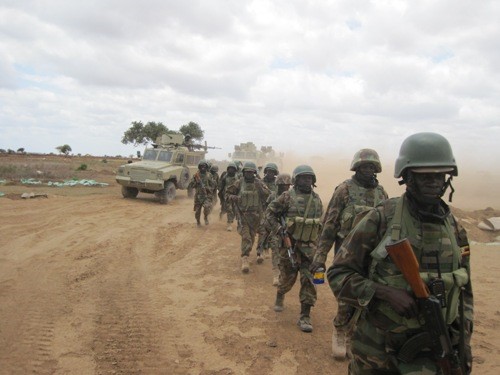 In a May 14 statement issued by al-Shabaab’s press office and carried on jihadi websites, the movement declared the Ugandan people’s re-election of Museveni and his party for a fourth term makes the people of Uganda “unanimously complicit in the crimes of their soldiers” in Somalia and was a confirmation of their “commitment to the invasion and oppression of the innocent civilians of Somalia” (Ansar1.info, May 14).

Al-Shabaab first issued threats of retaliation against Uganda for its contribution of troops to AMISOM in 2008. In July 2010, al-Shabaab terrorists succeeded in carrying out two bombings in Kampala that killed 74 civilians gathered to watch the World Cup of soccer final.

The new al-Shabaab statement described the troops of the Uganda People’s Defense Force (UPDF) as “paid mercenaries fighting an endless battle on behalf of the West” for a meager salary that can barely support them. Accusing the UPDF of shelling heavily populated residential areas, markets and even hospitals, al-Shabaab promised the Ugandan people would have to repay “ounce for ounce” the blood shed by AMISOM attacks on civilians.

Included in the statement was a reproduction of an identity card issued to a dead Ugandan corporal whose body is being held by the movement. Al-Shabaab fighters continue to defile the bodies of Ugandan and Burundian AMISOM soldiers killed in action by dragging them through the streets. In one such incident last week, the body was believed to belong to one of two Ugandan officers killed in a clash with al-Shabaab – Abdufita Mohammed, the commander of AMISOM forces in the Bakara market area of Mogadishu, and his intelligence officer, Abdiwahab Sheikh Dole (Daily Monitor [Kampala], May 16).

Ugandan security forces may have already succeeded in interdicting a new al-Shabaab terrorist effort in Uganda by arresting four young Somali men who had entered the country illegally by crossing through the bush to avoid border control points. Only one of the men possessed a passport, with the other three claiming to have lost theirs (Daily Monitor, May 16; Reuters, May 16).

Brigadier James Mugira, the Ugandan military intelligence chief, stated after the death of Osama bin Laden that Uganda continues to face other terrorist threats from the Lord’s Resistance Army (LRA) and the Allied Democratic Front (ADF) led by Jamil Mukulu, a former associate of Bin Laden during his time in Sudan in the 1990s (Daily Monitor, May 3).

This article first appeared in the May 20, 2011 issue of the Jamestown Foundation’s Terrorism Monitor