Though denials have been issued, the failure of al-Shabaab’s Ramadan offensive, intended to rout Somalia’s Transitional Federal Government (TFG) from Mogadishu, appears to have led to a major rift between the group’s Amir, Shaykh Abdi Godane “Abu Zubayr”, and his deputy, Shaykh Mukhtar Robow “Abu Mansur.” 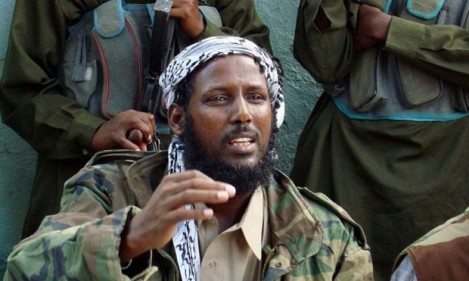 Though the rivalry between Abu Mansur and Godane goes back some time, it only burst into the open after Abu Mansur’s 1,200 to 2,000 fighters from the southern Bay and Bakool regions began to take heavy losses in the Ramadan offensive. Nearly all of Abu Mansur’s fighters are members of the Digil and Mirifle, known jointly as the Rahanweyn. There are reports of hundreds of deaths and desertions in the Bay-Bakool force, which was apparently pushed into the frontlines of the fighting by northern commanders. Abu Mansur downplayed complaints from his men that they were treated badly by other Shabaab commanders and failed to receive medical treatment when wounded until one of his commanders, Shaykh Ayub, went missing. Eventually Abu Mansur learned from Godane that the Shaykh had been badly wounded and was killed by members of al-Shabaab’s Amniyaat special forces unit (loyal to Godane) to ensure he would die a martyr. This proved the last straw for Abu Mansur, who ordered the withdrawal of his men from the battlefield in Mogadishu (Jowhar, October 8; Wadanka.com, September 28; Suna Times, October 9).

There are questions within al-Shabaab regarding financial improprieties and the appointment of members of Godane’s northern Isaaq clan to vital positions within the movement. A three-day mediation between the two leaders in a hotel in the southern Somali town of Marka failed completely, leading to Abu Mansur’s withdrawal of fighters under his command from Mogadishu (Waagacusub.com, October 1). Godane was supported in the dispute by Shaykh Ibrahim Haji Jama “al-Afghani”, another Shabaab commander from the Isaaq clan, who was quoted as saying, “Mukhtar Robow is a transgressor. He is a tribalist. He is nothing. Let him leave” (Jowhar.com, October 8; Wadanka.com, September 28).

According to one report, Abu Mansur made five demands of the Shabaab leadership:

• The resignation of Abdi Godane as the movement’s leader.

• An agreement to allow aid agencies to operate freely in Somalia.

• The disbanding of the Amniyaat Special Forces.

• The launch of an investigation into the death of senior al-Shabaab commanders in the frontlines.

• The dismissal of any al-Shabaab commanders found to be responsible for these deaths (Jowhar.com, October 8).

After TFG and AMISOM forces began making gains in the fighting, Abu Mansur’s forces returned to Mogadishu from the towns of Baidoa and Hudur in the Bay and Bakool regions (New Vision [Kampala], October 5; Dhacdo.com, October 12).  Apparently having made his point that the fighters from these regions were essential to al-Shabaab’s military success, Abu Mansur’s troops were able to help stabilize the frontlines in Mogadishu.

Abu Mansur is reported to have met in Mogadishu with Shaykh Hassan Dahir Aweys, leader of rival Islamist militia Hizb al-Islam, with the two discussing closer ties and a possible alliance against Godane (Markacadey.net, October 10). Abu Mansur was al-Shabaab’s chief negotiator in unification talks with Hizb al-Islam earlier this year that collapsed at the last moment when Godane insisted that Shaykh Aweys’ movement be absorbed into al-Shabaab and operate under that name only. There is speculation that Abu Mansur’s negotiations with Hizb al-Islam were designed to bring the Hawiye clan (which dominates Hizb al-Islam) into his camp, thus creating a powerful coalition against the outsider Abdi Godane, whose Isaaq clan is largely based in breakaway Somaliland and plays a small part in the fighting in south Somalia.

Abu Mansur took to the minbar (pulpit) of a mosque in Mogadishu’s Bakara market on October 8 to deny the reports of the rift (Garowe Online, October 9; Shabelle Media Network, October 9). As if to refute the view of some observers that Abu Mansur is nothing more than a “nationalist in Islamist garb,” the Shabaab deputy leader used the presence of the media to send his greetings to Osama bin Laden, assuring him that al-Shabaab were the students of al-Qaeda. “We are sending a message to our group leader – al-Qaeda leader Osama bin Laden – that we are still continuing fighting until we join our fellow brothers who were killed by American troops in other countries,” said Abu Mansur (IRIN, October 14; Shabelle Media Network, October 8; Garowe Online, October 9). He then followed his Mogadishu statement with another denial at the Dabaqeynka mosque in Baidoa, where he urged residents of the Bay and Bakool regions to join in the fighting. He described reports of the rift as a fabrication designed to sow suspicion in the ranks of the mujahideen (Somaaljecel.com, October 13).

Abu Mansur’s very public style is at odds with Abdi Godane’s furtiveness. The latter rarely makes public appearances or statements and was widely ridiculed in Somalia after photos appeared on the internet of the Shabaab leader donning women’s clothing as a disguise. One of the major issues between the two men has been Godane’s insistence on banning humanitarian aid agencies from working in Somalia, a ban actively opposed by Abu Mansur and the main reason the latter was relieved of his position as al-Shabaab spokesman last year. Lately the al-Shabaab leadership has even warned Somalis against accepting medical help or pharmaceutical drugs from AMISOM forces, virtually the only source of medical aid for many Somalis caught in war-torn Mogadishu.

It appears the military stalemates in Mogadishu and in Central Somalia against the Sufi Ahlu Sunna wa’l-Jama’a militia have begun to take their toll on the Shabaab leadership, allowing clan rivalries to emerge that were successfully submerged in the movement so long as it continued to gain ground. Godane’s secretive style of leadership and absence from the frontlines does not play well with the Somali fighters under his command, which may leave him perilously short of armed support should Abu Mansur make a play for the leadership.

This article first appeared in the October 21, 2010 issue of the Jamestown Foundation’s Terrorism Monitor