In a surprising statement, a leading member of Egypt’s Gama’a al-Islamiya (GI) has revealed members of the militant group had been sent to fight alongside government forces against South Sudanese rebels during the 1983-2005 Sudanese Civil War. The revelation was made by Dr. Najih Ibrahim, a founding member of the movement (al-Rai [Kuwait], November 16). 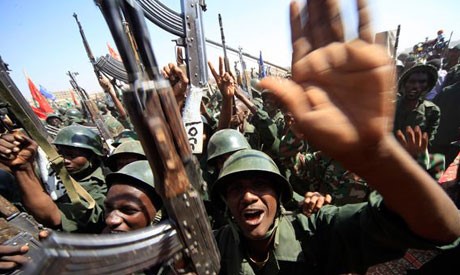 In the 1990s, Khartoum’s civil war with rebel forces in the South Sudan was given a religious character when the regime declared it a jihad, partly as a means of inspiring, and later enforcing, recruitment to the Sudanese Armed Forces (SAF) or the lightly-armed Popular Defense Forces (PDF), which was armed with rifles and Qurans in an unsuccessful effort to destroy the Sudanese People’s Liberation Army (SPLA), the most powerful rebel movement in the South Sudan. It was likely during Khartoum’s jihad against what it described as the “communist, tribal and atheist/Christian” SPLA that GI fighters joined the conflict, most probably in the ranks of the PDF, which suffered enormous losses fighting the veteran guerrilla forces of the SPLA on their own turf. Lately, however, there are fears that Khartoum is reviving the rhetoric of jihad to support its offensives against rebels in South Kordofan and the Blue Nile Province (Sudan Tribune, November 1).

The Alexandria-based Islamist ideologue said that GI’s “participation [in the civil war] was a huge mistake that led to what is Sudan’s fate now… The Sudanese regime focused its efforts on Islamizing the south and the Egyptian Islamists considered their participation in the war [was for the cause of] safeguarding Islam.”

From 1992 to 1997, al-Gama’a al-Islamiya waged a pitched war against the Egyptian state, its institutions and its financial underpinnings.  Some 1,200 people died as the group unleashed a wave of assassinations, mass murders of tourists and back-street battles with security forces.  However, the movement went too far in November 1997 when it massacred 58 foreign tourists and four Egyptians in a brutal attack at the Temple of Hatshepsut near Luxor. With popular support fizzling away and security forces successful in imprisoning many of the movement’s members, most of the members of the GI agreed to renounce violence, leading to the later release of some 2,000 Islamists from prison. However, some members, including Dr. Ayman al-Zawahiri, denounced the deal, and fled to Yemen and Afghanistan. Further renunciations of violence by those group members left in prison eventually led to the release of Najih Ibrahim in 2006 after serving 24 years.

The GI’s newly-formed political wing, Hizb al-Bena’a wa’l-Tanmia (Building and Development Party), ran a slate of candidates in the Egyptian parliamentary election after a court overturned a ban on the formation of a political party by the GI (Ahram Online, June 20; al-Masry al-Youm, September 20; MENA, October 10).

A member of GI’s Shura Council, Najih Ibrahim resigned from the council in March, along with Karam Zohid, reportedly as a result of differences that arose within the movement after the release of Colonel Abboud al-Zumar and his cousin Tarek al-Zumar, the GI founder who was imprisoned for three decades for his role in the assassination of President Anwar al-Sadat (Ahram Online, March 29).

Both before and after his release from prison, Ibrahim has been a major proponent of the “Revisions” produced by GI and other Islamist militant groups in Egypt. According to Ibrahim, these reassessments of the political use of violence “have revealed the major Islamic jurisprudential errors that al-Qaeda has made, especially with regard to the rulings and the pre-conditions of jihad” (al-Shorfa [Cairo], August 2). Though he regrets the slow pace with which the “Revisions” are penetrating extremist youth circles in Egypt, Ibrahim maintains that there is a major difference between GI and al-Qaeda: “Their aim is jihad, and our aim is Islam” (al-Sharq al-Awsat, August 14).

This article first appeared in the December 9, 2011 issue of the Jamestown Foundation’s Terrorism Monitor