A close examination of the terms of the Darfur peacekeeping mission approved by UN Security Council Resolution 1769 offers little confidence that the mission will be any more successful than the current African Union deployment. The resolution approves a force of 26,000 men, including the 7,000 AU peacekeepers already in Darfur (Middle East Online, August 6). On Khartoum’s insistence, the bulk of the force must be African in origin. The proposed “hybrid” UN/AU force appears to be little more than a much larger, more complicated version of the ineffective AU operation already in Darfur. Three of the most effective Western militaries (the U.S., the U.K. and Canada) have already stated they will have no role in the force. 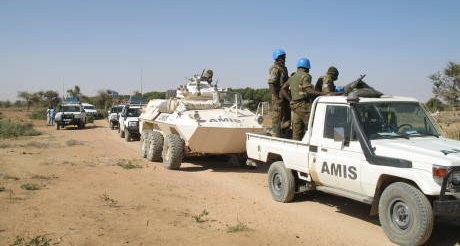 AMIS – African Union Mission in Sudan: To be replaced by UNAMID (Rob Crilly)

The United Nations-African Union Mission in Darfur (UNAMID) is a “Chapter 7” peacekeeping force. Chapter 7 of the UN Charter allows for “necessary action,” including force, to protect the mission as well as humanitarian organizations and civilians. In the watered-down version of Chapter 7 negotiated with Khartoum, the Sudanese government must first approve such use of force. UNAMID will be led by Nigerian Gen. Martin Agwai, an experienced peacekeeper and chief of the Defense Staff of the Nigerian Armed Services since June 2006. Agwai has warned that it is unlikely that enough African troops can be raised to fill out the new peacekeeping force. UNAMID is not expected to fully deploy until December 31, probably an optimistic deadline given the composition of the force and the nature of the territory. Financing will be a problem with a mission expected to cost $2 billion in its first year. Despite international pledges of support, existing AU peacekeeping forces in Darfur and Somalia are notoriously under-financed, with very few funds actually reaching the troops in the field. In a road-less environment with no infrastructure, the mission will require an effective system of transport and air support. If trouble erupts, surface routes will become highly dangerous and outposts difficult to relieve or evacuate.

Instead of mandating disarmament, Resolution 1769 only calls for UNAMID to “monitor” illegal arms movements in Darfur. All parties are urged to commit to a cease-fire and the creation of “initiatives” to return the displaced, provide compensation and put new security measures in place. There are no provisions for the arrests of war crimes suspects. During Security Council negotiations on the resolution, China and the three African members of the UNSC (South Africa, Ghana and the Republic of the Congo) succeeded in dropping a key provision calling for “further measures” (i.e., sanctions) to be taken against Sudan if it failed to cooperate with the UN mission.

There is no question of the 2.5 million displaced persons returning home in the near future. The well-armed Arab tribes that have settled on seized lands must first be removed. This is not as simple as returning them to their traditional lands, however, for in many cases their old pastures have become lifeless deserts. Land redistribution or compensation cannot be achieved without the participation of Khartoum and certainly does not fall within UNAMID’s mandate. The traditional land rights system of Darfur was designed to accommodate both nomads and farmers. Some form of renegotiation of this system with the involvement of local scholars and tribal elders would seem to form the best basis for a lasting peace in Darfur. None of this will be possible, however, without a process of disarmament and the demobilization of militias and rebel groups.

Sudan’s President Omar al-Bashir and Vice President ‘Ali ‘Uthman Muhammad Taha are consummate political survivors in a country where politics is frequently played for keeps. They will not be looking for an open clash with the UN force, but will do everything else possible to make their stay uncomfortable. The Sudanese leadership will not be easily cowed or forced to relinquish sovereignty in any degree. Its consent to a Chapter 7 UN force comes only after a considerable diplomatic effort by China, perhaps the only world power with an honest claim to influence in Khartoum today. It would be unwise to expect China’s present level of support for the Darfur mission to continue very long after the close of the 2008 Beijing Olympics.

The conflict is growing increasingly complicated. Arabs are fighting Arabs over depopulated regions, and former rebels who signed the 2006 Abuja agreement are now fighting their former allies on behalf of the government (al-Sudani, August 2). Just identifying the combatants will be a test for the UN/AU mission; few of the larger tribes share any single political viewpoint and it is often impossible to visually distinguish a Darfuri “Arab” from an “African.” All units will depend heavily on a small pool of translators; the local dialect of Arabic spoken as a lingua franca is poorly understood outside of Darfur. Banditry (including attacks on humanitarian convoys) will continue even through a cease-fire. Any such attack could easily provide an excuse by one party or the other to resume hostilities. With at least 16 rebel factions in the field, the development of a unified leadership is essential to the success of negotiations (Sudan Tribune, August 3).

The experience of the AU force in Somalia, where only 1,500 Ugandan troops showed up while four other countries failed to deploy the balance of the 8,000-man force, does not inspire hope that anything like 20,000 African soldiers can be in Darfur by the end of the year. It is almost inevitable that the projected “hybrid” force will have to be reshaped to include Western contingents just to maintain a presence in Darfur. Real success in restoring peace to Darfur under UNAMID’s current mandate is highly unlikely.

This article first appeared in the August 7, 2007 issue of the Jamestown Foundation’s Terrorism Focus