A pair of suicide bombings on January 28 constituted the latest round in a bitter struggle between Taliban militants and government security forces for control of Pakistan’s strategic Kohat Tunnel, an important part of Pakistan’s N55 highway (popularly known as the “Indus Highway”), which is heavily used by NATO supply convoys headed for Afghanistan and Pakistani military convoys headed for volatile Waziristan. 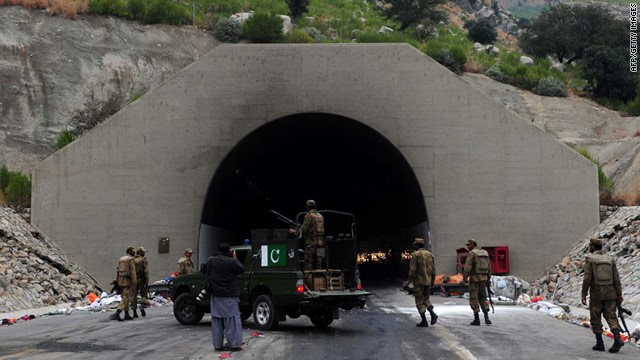 The first bombing was carried out by a Bedford truck full of explosives that entered the tunnel from the Darra Adamkhel side, apparently unchallenged by tunnel security units. The explosives were detonated some 600 meters inside as the driver crashed the truck into the wall of the tunnel. The blast damaged the electrical, drainage and exhaust systems and created a crater one meter deep and six meters wide. This forced a 24-hour closure of the tunnel, which was later reopened to small vehicles only (Express Tribune [Karachi], January 30; Daily Times [Lahore], February 2). Repairs enabling the passage of heavy vehicles are expected to take some time. Bomb disposal experts later estimated the truck-bomb contained roughly 500 kg of explosives (Pakistan Observer, February 4).

A second explosion followed as an oil tanker rigged with a similar charge of explosives crashed into a military checkpoint outside the tunnel. Normally manned by units of the regular army and the paramilitary Frontier Corps (FC), the checkpoint was unmanned at the time of the attack, approximately 12:30 AM. The tunnel has only been open at night for the past two months after night-time use was banned following its brief seizure in January 2008 by Taliban forces who set off explosives inside the tunnel. A male civilian and two women were killed immediately in a car following the tanker to the tunnel. The death toll in the two attacks has now reached eight, as several wounded have succumbed to their injuries (Pakistan Observer, February 4). The owner of the oil tanker has appealed to the government for compensation for the destruction of the tanker (The News [Islamabad], February 5).

Responsibility for the blasts was claimed by the Darra Adamkhel Taliban under the leadership of Tariq Afridi (The News, January 30). Tariq Afridi took command of the Darra Adamkhel fighters in November 2009 after the group’s two principal leaders were killed in a military operation in 2008. Taliban fighters based in the hills around Darra Adamkhel (and its thriving arms bazaar) have made regular attacks on supply convoys passing through the region.  The Darra Adamkhel command is most notorious for the kidnapping and murder of Polish engineer Petr Stanczak in February 2009 (The News, February 15, 2009; Dawn [Karachi], April 26, 2009). Taliban fighters in the area have also been responsible for numerous attacks on the region’s substantial Shiite minority. Reports last December indicated that members of the local Taliban were shaving their beards and infiltrating the Darra Adamkhel area (Daily Times, December 6, 2010).

The strategic 1.9 km tunnel was built with Japanese assistance and completed in 2004. It connects the relatively isolated Khyber-Pakhtunkhwa district with Peshawar and the rest of Pakistan. The tunnel allows shipping by large trucks that was previously impossible due to the dangerous hairpin turns of the old 14 km Kohat Pass road. Control of the tunnel has been an important Taliban objective for several years. A major battle between militants and government troops over several days in January 2008 saw Taliban fighters led by Tariq Afridi take temporary control of the tunnel before being driven off by a massive military response (PakTribune, January 28, 2008; The Nation [Islamabad], January 31; Reuters, January 27, 2008).

This article first appeared in the February 10, 2011 issue of the Jamestown Foundation’s Terrorism Monitor.