A former Taliban commander who, after his defection, was appointed Governor of the Musa Qala district of Helmand Province told an independent Afghan TV station that he now regrets his choice and foresees at least another five years of warfare in Afghanistan (Tolo TV, June 22). Mullah Abdul Salam Hanafi, a chieftain in the Alizai tribe, has been speaking openly lately of his distaste for the Karzai government and his conviction that the UK is behind all the problems experienced by the people of Helmand Province. Since his defection to the government, Mullah Abdul Salam has survived several assassination attempts, including a concentrated attack on his house and a rocket fired at a British Chinook helicopter in which he was flying (The Nation [Islamabad], May 18, 2006). 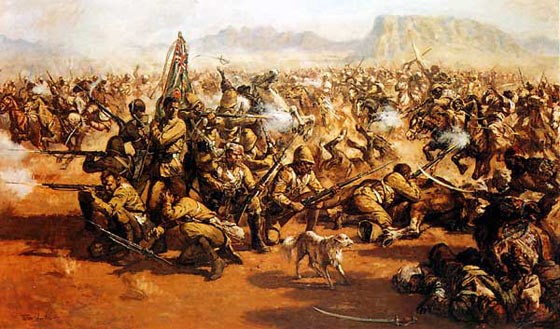 Last March, Abdul Salam complained that UK troops had urged Afghan police to abandon their post in the Mullah’s nearby hometown of Shah Karez during a battle with the Taliban rather than come to their aid (Afghan Islamic Press, March 17; Geo TV, March 17). The 50 officers, mostly drawn from the Mullah’s private militia, were eventually forced to withdraw from their post with losses (The Scotsman, March 24, 2010). In his latest interview, the Mullah now claims that British forces landed helicopters with Taliban troops and provided military support to the Taliban during the battle.

•    The British are seeking revenge for their defeat at the 1880 Battle of Maiwand during the Second Afghan War. The 66th Berkshire Regiment and a number of Indian native regiments were virtually destroyed in a Pashtun victory that also cost thousands of Afghan lives.
•    The British are “probably involved” in opium production, based on what the Mullah describes as UK opposition to his attempts to eradicate the drug trade and insistence that drug producers be released after having been arrested by the Mullah. He says he has heard that opium is being flown out of the military airport.
•    The British are also interested in possessing potential mineral riches in the province.

The Mullah’s relations with Britain appear to have declined rapidly during the posting of the 5th Battalion (Argyll and Sutherland Highlanders) of the Royal Regiment of Scotland in Musa Qala. He was gravely offended by the arrest of his 15-year-old son (one of 27 children by five wives) by a Scottish officer in July 2008 and also complained loudly that the British had failed to fill his “war chest,” intended, he says, to be used for bribing Taliban commanders. In turn, British forces have accused the Mullah of taxing opium producers and permitting his militia to be engaged in criminal activities (Sunday Times, July 9, 2008; Independent, November 12, 2008).

Mullah Abdul Salam mocked ISAF efforts to take control of the Marjah district of Helmand in a large offensive involving 15,000 troops last February, saying that the Afghan troops left there were surrounded in the bazaar (see Terrorism Monitor, June 17). “If they give me 600 policemen today, I will capture Kajaki District in Helmand and ensure security there immediately.”

The Mullah also had harsh words for Pakistani authorities, claiming they are the Taliban’s “main support” in what he alleges is a larger plan to “kill Pashtuns.” The Mullah says that all insurgent operations in Afghanistan are organized and authorized by the movement’s Quetta-based leadership, adding that Pakistani intelligence devises the plans and implements them through Mullah Omar in Quetta. He describes Mullah Omar as being like a “prisoner of the intelligence networks in Pakistan.” Since Islamabad believes Afghan president Hamid Karzai is close to India, Mullah Abdul Salam predicts at least another five years of warfare.

At almost the same time as the Mullah made his statement, Iran’s Foreign Ministry said they have observed British security services cooperating with terrorist groups in Afghanistan (Islamic Republic of Iran News Network, June 22). Taliban spokesman Qari Yusuf Ahmad also suggested that the heroism of British troops in Afghanistan has not benefitted their country and that the UK should expect more casualties as it marks the death of 300 troops in Afghanistan (Afghan Islamic Press, June 21).

This article first appeared in the July 1, 2010 issue of the Jamestown Foundation’s Terrorism Monitor