The four condemned killers of both American USAID officer John Granville and his driver Abdel Rahman Abbas shocked most Sudanese when they made a dramatic escape from North Khartoum’s Khober Prison, the first escape since the notorious prison’s construction by British imperialists in the late 19th century. 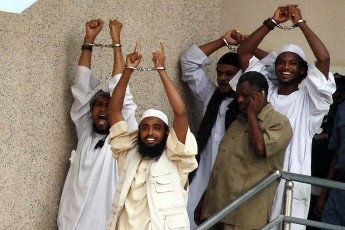 The four escapees, who were awaiting execution, were supposedly shackled hand and foot (as are all condemned men in the prison), but nonetheless escaped through a sewage pipe leading to a main street. The men were then picked up by a Toyota Land Cruiser which fled with the fugitives. When the vehicle reached a police checkpoint on the northern outskirts of Omdurman the fugitives opened fire, killing one police officer. A second police car tried to follow the Land Cruiser at high speed, but rolled off the road. The Land Cruiser was later recovered with four flat tires, deflated by police bullets (Sudan Tribune, June 12; June 13). The driver of the car was reported to have been arrested, but the four escapees managed to flee on foot (Reuters, June 11). Though the search has focused locally on the Abu Halif area southwest of Omdurman, Sudanese authorities have also asked Interpol for assistance, suggesting investigators may believe the men have left the country (Sudan Tribune, June 13).

Granville and Abbas were killed while returning from a Khartoum New Year’s Party in the early hours of January 1, 2008. The attack on Granville came only one day after then U.S. President George Bush signed the “Sudan Accountability and Divestment Act,” a bill drafted in response to Khartoum’s alleged genocide in Darfur. The Granville family’s Sudanese lawyer, Taha Ibrahim, claimed the escape was a “political partnership that took place from inside and outside Sudan” and suggested the four fugitives might be headed for lawless Somalia (Asharq al-Awsat, June 12). The condemned men had the opportunity under Islamic law of having the death penalty waived if the consent of the aggrieved families could be obtained. While the Abbas family consented, the Granville family did not, saying that Sudanese law did not provide the alternative of a life sentence and was thus unable to ensure the men would not kill again.

The exact allegiance of the fugitives (if any) has never been determined. In the days after the dual murders, claims of responsibility were issued by both Ansar al-Tawhid (Supporters of Monotheism) and the previously unknown al-Qaeda in the Land of the Two Niles (AFP, January 4, 2008; Asharq al-Awsat, October 12, 2008). The government disputed the existence of both organizations and the suspects were never charged with belonging to either one during the trial (see Terrorism Focus, February 6, 2009). One of the fugitives, Abdul Raouf Abu Zaid Muhammad, is the son of the leader of Sudan’s Ansar al-Sunna al-Muhammadiya, a Salafist religious group whose mosques have been the target of bloody assaults by rival Islamists. The movement has difficulties with the regime, but is largely non-political and was not implicated in the murders.

After the escape, a joint investigation committee was formed between officials of the Ministry of the Interior and the Ministry of Justice and there are reports that the investigation is now focusing on the warden of Kober Prison (al-Ayyam [Khartoum], June 15). Few in Khartoum believe an escape from Kober Prison could be managed without some type of inside cooperation. Though the brick-built prison by the Blue Nile is well-known in Sudan for its executions and amputations, the staff is generally regarded as professional. Despite overcrowding and infernal summer heat in the cells, the prison is still considered a safe alternative to the regime’s infamous “ghost houses”– off-the-books detention centers with no accountability for the treatment or even survival of their inmates.

A wing of Kober Prison is dedicated to high-profile political prisoners who are better treated and separated from criminal inmates by a wall. Some of the nation’s most famous politicians have spent time in Kober, including Islamist Hassan al-Turabi, current vice-president Ali Osman Muhammad Taha, Umma Party leader and former president Sadiq al-Mahdi and Democratic Unionist Party leader Muhammad Osman al-Mirghani. Roughly 100 members of Darfur’s Justice and Equality Movement (JEM) are in Kober Prison awaiting execution for their role in the 2008 raid on Omdurman.

This article first appeared in the June 24, 2010 issue of the Jamestown Foundation’s Terrorism Monitor